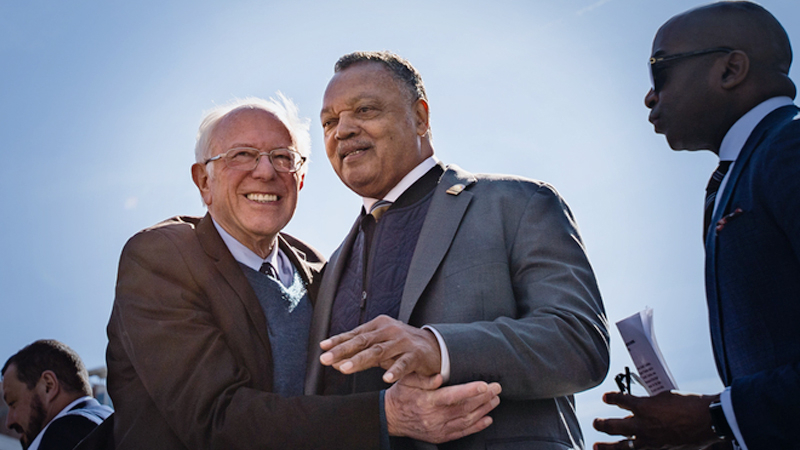 That meant something big to Joel Rubin, whose career has taken him from the establishment Bush and Obama administrations to the upstart, grass-roots Sanders campaign, where he did Jewish outreach for a man who seemed until Super Tuesday to have a real shot at becoming the country's first Jewish major-party presidential nominee and - perhaps - its first Jewish president.

"With the Jewish work we've done, we've made an impact on the debate in a way one can't turn back," Rubin said Tuesday night, as votes were coming in showing Sanders getting swept in primaries in Arizona, Florida and Illinois.

Sanders simply being Jewish wasn't the significance, Rubin said. It was the way the independent senator from Vermont forcefully rejected that his more left-leaning views - backing diplomacy with Iran and being willing to withhold aid to Israel among them - conflicted with his Jewish identity.

By last month, boycotting AIPAC, the massive pro-Israel conference, Sanders had forced conversations about how to resolve the Israeli-Palestinian conflict. By welcoming even strong Israel critics into his campaign, Sanders had shown the way to fight anti-Semitism is to engage everyone. The senator had expanded the idea of what it means to be a good Jew. That's how it seemed to Rubin Tuesday, as the results rolled in.

"Bernie's impact has been significant. It's politically hard to do that and take on these fights, but these are the fights worth having," Rubin said before pausing. "It's bittersweet, for sure."

Yet what Sanders' campaign has shown about the U.S. Jewish past and future remains very much up for debate. He's gotten closer than any other Jewish American to the presidency, yet polls show relatively few Jews have opted to become a key part of his base.

Rubin knows the complexity as well as anyone.

He's a liberal who worked in President George W. Bush's security infrastructure. He was raised in a family affiliated with Conservative Judaism, the middle-of-the-road denomination that balances tradition and adherence to Jewish law with modern life. He helped found J Street, a liberal advocacy alternative to AIPAC. His best friend is a rabbi who sits on AIPAC's board. His wife is a Republican.

In other words, Rubin is used to arguing with his fellow Jews.

But nothing put the 48-year-old more squarely at the crossroads of the various parts of the Jewish community than his decision to become Sanders's Jewish outreach director. Institutional American Jewry - largely Democratic - was lining up behind former vice president Joe Biden or U.S. Sen. Elizabeth Warren, D-Mass. And within the campaign, Rubin stuck out among the outreach staff because of his background with Bush and Obama.

"He's absolutely in the middle," said Jeremy Ben-Ami, who has run J Street since it opened in 2007. "He is very much a supporter of the state of Israel and a very conscious Jew, and that probably does cause some level of suspicion from those to his left. . . . And then you've got AIPAC World and groups further to the right. I'm sure he takes pretty strong incoming from both ends of the spectrum."

It was Rubin's Jewish institutional bona fides and connections that in part won him the job with Sanders, who during his 2016 campaign dismissed his just-hired Jewish outreach director because of her social media posts attacking Israeli Prime Minister Benjamin Netanyahu.

Simone Zimmerman's hiring had thrilled more left-leaning Jews, who want to see tough criticism of the Israeli government and calls for accountability to become mainstream. But polls show U.S. Jews are divided on how the United States should engage with the Israeli government. Someone with a foot in every camp could reflect that. Someone like Rubin.

"Bernie needed Joel more than Joel needed Bernie, but it was a good shidduch," said longtime Democratic Jewish activist and political consultant Steve Rabinowitz, using the Yiddish term for a Jewish arranged marriage. "He swims in mainstream liberal circles as well as very liberal circles. And that's very valuable for Bernie and for the Democrats."

Rabinowitz, who worked on communications in the Clinton White House, credits Rubin with getting Sanders - a secular, unaffiliated Jew - to talk more about his faith, including in a four-minute video with images of the senator lighting a menorah and speaking at a Jewish conference, spliced with footage of the Holocaust, modern-day U.S. Nazis and environmental degradation.

"Before that, [Sanders] didn't talk about being Jewish," Rabinowitz said. "He'd talk about his 'Polish' parents. Your parents weren't 'Polish' dude, they were Jewish!"

Sanders's Jewish critics were also very concerned about his refusal to condemn some prominent surrogates who made comments deemed anti-Semitic. Rep. Ilhan Omar, D-Minn., was rebuked by the House of Representatives after saying, in a conversation about Israel, there shouldn't be pressure for "an allegiance to a foreign country" - a comment fraught in anti-Semitic history. She also said support for AIPAC was "all about the Benjamins" and that Israel has "hypnotized the world" - echoing anti-Semitic tropes. Omar has apologized and said she is learning from the controversies.

Rep. Rashida Tlaib, D-Mich., another vocal Sanders supporter, drew ire in January with a tweet about the "BDS" movement - an effort to press Israel on its treatment of the Palestinians by boycotting and divesting from the Jewish state. Members in Congress who try to shut down BDS "forgot what country they represent," Tlaib posted.

Sanders says he doesn't support BDS. Tlaib and Omar both do.

Sanders has called Omar "one of the most extraordinary people in American politics."

"Joel and I had a huge argument about that," he said of Sanders' praise of Omar. "For me as a Jew and a Zionist, I find that very problematic."

But is Sanders good for the Jews, as Rubin passionately believes he is? Stanger sighs.

"It depends on how you look at it. It's never a bad thing to have Jews involved in politics. ... God willing, I hope a Jew will be president someday," he said. "But Sanders isn't the poster child I'd put forward for it."

To Rubin, the Sanders campaign isn't just a nice thing - it's an urgent thing. U.S. Jews are becoming more polarized, in part because of disputes about Israel and Jewish identity, and they are becoming increasingly distant from Israeli Jews.

White supremacism and nationalism are rising. AIPAC this year featured as a speaker Austrian Chancellor Sebastian Kurz, who has formed a coalition with his country's far-right party. The conference also hosted Serbian President Aleksandar Vucic, who was minister of information in the 1990s when thousands of Muslims were murdered in a genocide.

Rubin believes American Jews need to keep their eyes on what he sees as the ball, instead of focusing so much on statements by Omar and Tlaib.

"They are not the primary threat to the U.S. Jewish community. They are not walking into Tree of Life and shooting it up," he said, referring to the 2018 massacre at a synagogue in his native Pittsburgh. "If we're going to defeat hate as a country, we need to find allies in this fight, and these are people who are part of rejecting hate in our society. ... And I'm willing to give more leeway to people of color who are critical of Israel who are in our coalition and are willing to engage and to accept errors."

Rubin said he believes the climate is changing. He watched how J Street was initially seen as more radical and is now mainstream. He saw how criticism of the Iraq War went from unpatriotic to unsurprising. He knows his work pressing for diplomacy with Iran, and now on the Sanders's campaign, may come at some professional cost. He sees it all as an extension of his Jewish upbringing, in Conservative synagogues and Jewish youth groups and summer camps and Israel trips.

"I'm just doing the stuff I learned as a kid," he says, using the Hebrew term for "fixing the world."