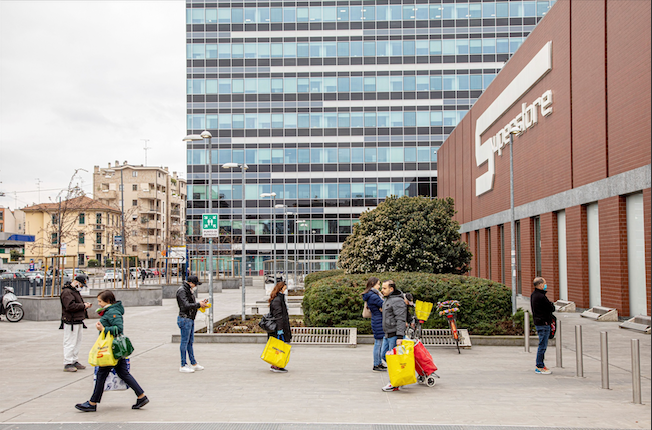 WASHINGTON - The U.S. State Department on Thursday warned Americans not to travel internationally and advised those remaining abroad to shelter in place, as much of the United States and Europe continued to shut down to stem the worsening global spread of the coronavirus.

The directive came as Italy hit a grim milestone in the outbreak, with the number of deaths linked to the coronavirus - 3,405 - surpassing those in China, where the virus first flared. Italy, which has one of the world's oldest populations, has reported more than 2,000 dead during the past week as it has tried to institute a national lockdown.

Italian army trucks were moving coffins into some of the hardest-hit towns in the country's north. They include Bergamo, where funeral facilities have been overwhelmed in recent days. The number of people infected with covid-19, the disease the virus causes, has rapidly increased in Europe, with more than 10,000 cases now in France and 17,000 in Spain, which announced the closure of all its hotels Thursday.

"We will see the number of people diagnosed dramatically increase in the next four to five days," she said. "It will be five to six days' worth of tests being run in 24 to 48 hours. So our curves will not be stable until sometime next week."

The dramatic increase in positive cases came with alarming news about the virus Thursday: Centers for Disease Control and Prevention data now shows that younger adults are a large percentage of coronavirus hospitalizations in the United States, a departure from the earlier belief that the virus almost exclusively affected the elderly.

More and more of American life is grinding to a halt in an effort to stop the virus, and officials have become even more aggressive about closing businesses and attempting to get people to stay away from one another to avoid transmission.

Pennsylvania Gov. Tom Wolf, a Democrat, ordered the closure of all "non life-sustaining" businesses in the state as of 8 p.m. Thursday. Wolf said some businesses were not complying with his orders to close dine-in service at all bars and restaurants, and businesses that do not comply with the most recent order could be subject to fines or loss of license.

"We have no time to lose. With every minute that passes, more Pennsylvanians come into contact with the covid-19 virus," Wolf said in a statement he read on local television. "This is what needs to be done to halt the spread of this virus."

To help blunt the economic pain from the coronavirus outbreak, Senate Republicans introduced a $1 trillion fiscal package, which includes sending direct cash payments to many Americans.

Senate Majority Leader Mitch McConnell, R-Ky., said the Coronavirus Aid, Relief, and Economic Security Act also will guarantee loans to small businesses and offer financial bailouts to hard-hit industries, such as the nation's airlines, which have been crippled due to severe declines in travel. The massive proposal is just a starting point for negotiations with Democrats over how best to prop up the U.S. economy during the public health crisis.

Stocks ended the day slightly higher, with the Dow gaining 188.27 points, or about 1 percent, to close at 20,087.19. The rebound comes after a turbulent day of trading Wednesday, when the blue-chip index lost more than 1,300 points, pushing the benchmark below 20,000 points for the first time in three years.

Texas Gov. Greg Abbott, a Republican, declared a statewide disaster Thursday, ordering schools and gyms to close, and limiting bars and restaurants to carryout service. Abbott called up the National Guard earlier this week to help with the response, as have other governors nationwide.

Gen. Joseph Lengyel, the chief of the National Guard Bureau, told reporters at the Pentagon on Thursday morning that nearly 2,000 members of the Guard across the country were involved in the response to the pandemic, and he expected the number to nearly double by the weekend.

Eventually, he said, "tens of thousands" could be involved.

At the White House, President Donald Trump incorrectly said that a common malaria drug, chloroquine, has been approved by the Food and Drug Administration to fight covid-19, calling it a possible "game changer."

But after Trump spoke, FDA Commissioner Stephen Hahn clarified that chloroquine would first need to be tested for use on the virus.

Reports of use of chloroquine in coronavirus patients in China and France have suggested the drug has helped, but there is no data to prove that it works.

There are thus far no drugs that treat the coronavirus, and a vaccine is at least a year away from being made, tested and released to the public, officials said.

As Trump took the podium at the briefing, his effort to blame China for the virus was visible in his briefing notes. In a photo of his printed remarks captured by a Washington Post photographer, the word "Corona" is crossed out and replaced with "Chinese."

Trump on Thursday repeatedly referred to the coronavirus as "the Chinese virus," a phrase that critics have said is racist and puts Asian Americans at risk. But when Trump delivered that specific part of his remarks, he skipped over the handwritten word "Chinese," describing it only as "the virus."

The Trump administration also is in talks with the Mexican government to limit border crossings to essential travel only, according to officials from both countries with knowledge of the discussions, who weren't authorized to speak publicly about the talks.

The restrictions, which could take effect as soon as Friday, would apply to vehicle passengers and pedestrians crossing at legal ports of entry. Commercial goods arriving via cargo rail and truck would be exempt.

The United States already has reached a similar accord with Canada, but negotiations with Mexico have been stickier, because the volume of people crossing each day to shop, visit family members and conduct business is much larger. With nearly a million people crossing each day, the U.S.-Mexico land border is considered the busiest in the world.

A Mexican official who was not authorized to discuss the talks publicly said the country's government was working in close coordination with U.S. authorities to limit the spread of the virus, while urging the United States to take into account the potential impact for Mexico while defining what would constitute "essential travel."

The State Department raised its travel advisory for all international travel from 3 to 4, the most serious category, reflecting the difficulty thousands of Americans are having returning to the United States as borders close and airlines cancel flights. Passport offices are closing nationwide on Friday.

"U.S. citizens who live in the United States should arrange for immediate return to the United States, unless they are prepared to remain abroad for an indefinite period," the State Department advisory said. "Many countries are experiencing covid-19 outbreaks and implementing travel restrictions and mandatory quarantines, closing borders, and prohibiting noncitizens from entry with little advance notice."

Particularly high numbers of American travelers have been stranded in Morocco, Peru, Honduras and Tunisia, where some have complained that U.S. embassies have not provided adequate help in getting them home.

Trump told reporters at the White House on Thursday that the United States is considering tapping the military to help stranded travelers, including hundreds of Americans in Peru, though he did not offer specifics.

"We have a group of young people in Peru, and we're working on taking care of that with the military," Trump said. "We're trying to get them out. They got caught. . . . It's a large group, it's about 300."

Countries across the globe are shutting themselves off to contain the virus. India barred incoming commercial flights for a week, and Australia and New Zealand closed their borders to everyone except citizens and residents. The United Arab Emirates went further, stopping expatriate residents from returning to the country.

Domestically, the virus continues to upend the presidential race. Connecticut became the sixth state to push back its presidential primary. Gov. Ned Lamont, a Democrat, announced he will work with the Connecticut secretary of state to move the primary from April 28 to June 2.

Lamont said the decision was part of "an effort to carry out democracy while keeping public health a top priority."

Three states voted on Tuesday as scheduled. Louisiana, Georgia, Kentucky, Maryland and Ohio have delayed votes because of the virus.

Wyoming suspended the in-person portion of its caucuses, scheduled for April 4, and Democrats in Kansas, who control that state's primary, already were planning to mail out ballots to all registered Democrats.