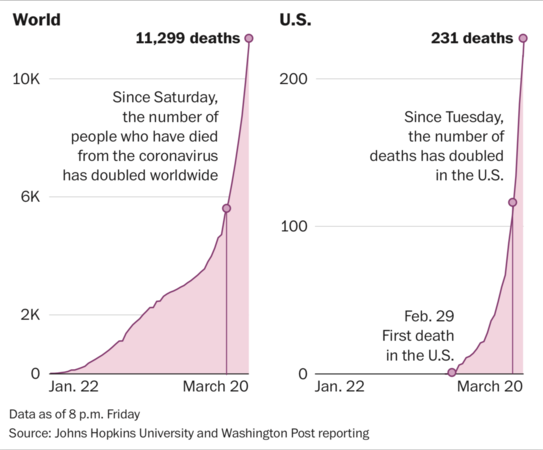 More than 70 million people - one in five Americans - have been told to stay at home in California, Illinois and New York, extraordinary moves from state governors that aim to limit people from interacting and spreading the coronavirus. With more than 17,000 confirmed cases and 231 virus-related deaths nationwide, authorities believe the impact could skyrocket in coming days.

The orders essentially close three of the nation's largest cities: New York, Los Angeles and Chicago. They come as Anthony Fauci, director of the National Institute of Allergy and Infectious Diseases, said Friday that Americans will need to stay at home as much as possible and maintain social distance from other people for at least several weeks to stem the spread of the virus.

New York Gov. Andrew Cuomo, a Democrat, said Friday that all New Yorkers are prohibited from going into their offices unless they perform essential services, such as those who work at a hospital or grocery store or who provide Internet or water. Cuomo also has banned all nonessential gatherings. The regulations take effect Sunday.

"These provisions will be enforced," he said. "These are not helpful hints. This is not if you really want to be a good citizen."

Cuomo said people are still allowed to leave their homes, and he urged walks outside for the sake of mental health. New York is quickly becoming the epicenter of coronavirus cases in the United States: The state conducted 10,000 coronavirus tests on Thursday, with 2,950 confirmed positive, Cuomo said.

There were 7,102 confirmed coronavirus cases in New York as of Friday, Cuomo said, and 18 percent of those patients have required hospitalization.

California Gov. Gavin Newsom, a Democrat, issued a statewide stay-at-home order Thursday night. Like in New York, trips to the grocery store, pharmacy and other essential places will be allowed. Newsom projected that 56 percent of California's population - or about 22 million people - would be infected with the virus that causes covid-19 in the next eight weeks if no mitigation efforts are taken.

"The point of the stay-at-home order is to make those numbers moot," he said.

"As this epidemic has progressed, we've had to make some hard decisions," he said. "But ultimately you can't have a livelihood if you don't have your life."

Pritzker was one of the first governors to require bars and restaurants to move to carryout-only service. Dozens of states have followed suit, including Florida, where Gov. Ron DeSantis, a Republican, issued an executive order Friday closing bars and nightclubs for 30 days; he also is requiring restaurants to limit capacity to 50 patrons and to ensure tables are at least six feet apart. Gyms also will close under the order.

Pennsylvania Gov. Tom Wolf, a Democrat, ordered all "non-life-sustaining" businesses in the state to close Thursday, effectively shutting down the state and cities of Philadelphia and Pittsburgh. In Ohio, Gov. Mike DeWine, a Republican, ordered the closure of all adult day care services and senior centers.

The virus continues to upend global financial markets, with U.S. markets tumbling more than 10 percent from where they began Monday to wrap up their worst weekly finish since the 2008 financial crisis. The Dow Jones industrial average fell more than 910 points, erasing all Trump-era gains. The Standard & Poor's 500 index closed down 4.3 percent and the Nasdaq fell 3.8 percent.

The government announced Friday that taxpayers will get a bit of a reprieve amid the fiscal chaos: The tax filing deadline has been pushed from April 15 to July 15. People will be able to make payments without interest or penalties attached, according to Treasury Secretary Steven Mnuchin.

President Donald Trump spoke by phone with Senate Minority Leader Charles Schumer, D-N.Y., about the next phase of a coronavirus relief package.

"We had a wonderful conversation. We both want to get to a good solution," Trump said during a news briefing Friday. "Seeing people that weren't speaking, getting along well, because we all have one common aim, and that's to get rid of this invisible enemy, get rid of it fast."

Schumer told the president there were at least six policies the Democrats want to see included in the legislation, including invoking the Defense Production Act to get ventilators and other medical equipment made.

Worldwide, the number of people with the virus is soaring, with more than 270,000 cases confirmed across the globe. The World Health Organization noted that it took more than three months to reach 100,000 cases worldwide - but just 12 days to log the next 100,000.

In Italy, more than 4,000 people have now died. The country reported its highest daily death total Friday, with 627 people succumbing to the virus in 24 hours. Most of Italy's deaths have occurred during the past week, as overwhelmed hospitals struggle to deal with the surge of critically sick.

Italy is under a complete lockdown, and authorities have cited 9,600 people in one day for violating the order.

The numbers of deaths and confirmed cases continue to rise in Iran and Spain, where cases surged 30 percent in a day. Nearly 20,000 Spaniards have tested positive for the virus that causes covid-19, and more than 1,000 people have died. The country also is on lockdown, and all hotels were ordered to close by the end of next week. Most cases are centered in the nation's capital, Madrid.

Hong Kong reported a record jump in new coronavirus cases - with 48 - as the region braces for an uptick in illness involving people who rushed back home to beat widening travel restrictions.

One positive tidbit was that for the second day in a row there were no new cases reported in China, where the virus took hold.

Further evidence of the United States trying to seal itself off from the outside world came Friday, when the United States and Mexico reached an agreement for a partial closure of the border between the two countries, officials said. Mexican Foreign Minister Marcelo Ebrard, said the border would not be completely closed but "restricted" when it comes to tourism and recreation.

Chad Wolf, the acting secretary of Homeland Security, said U.S. authorities would begin "immediately" turning back and deporting migrants who attempt to cross the border illegally, rather than detaining them or putting them into court processes.

The United States and Canada jointly agreed earlier this week to close their shared border. Canadian Prime Minister Justin Trudeau said Friday that Canada will send back asylum seekers who attempt to cross the border.

American officials have started to brace for a wave of coronavirus patients, with the government starting to identify hotels, college dormitories and other unused buildings to lease and turn into makeshift hospitals, according to the commanding general of the Army Corps of Engineers.

"This is an unbelievably complicated problem, and there is no way we are going to be able to do this with a complicated solution," Semonite said of the existing lack of bed space. "We need something super simple. So, our concept is a standard design."

It will include nurses' stations in hallways and require the installation of equipment that creates zero-pressure rooms to contain germs, Semonite said. The plan already has been approved by the Department of Health and Human Services and FEMA, he said.

Semonite met with Cuomo this week and told the governor to immediately identify possible facilities.

"He said, 'How fast do you need them?' And I said, 'I need one tonight. I need three by tomorrow night,' " Semonite said. "So, we actually got turned on by the governor. We got money from FEMA to go into two buildings on Tuesday night."

Among the buildings the Corps already has investigated is the Javits Center, a convention facility in the Hell's Kitchen section of New York City, and structures affiliated with the State University of New York.

Semonite said his engineers were walking through 10 other buildings in the state on Friday, including some hotels and other structures with open-space designs.

"The bottom line is, we've got to do something very, very quick," Semonite said. "Most of the governors are saying that their peak is somewhere around the middle of April."

In Los Angeles, where 4 million people have been instructed to stay inside their homes, life along Wilshire Boulevard at first appears unchanged. People coming and going in cars from apartment towers, a jogger or two, families and their pets getting fresh air.

"This is like any other day," said a UPS driver, who was not authorized to speak to the media, as he delivered a cart full of packages. "Just a little less traffic and that's really it."

But nothing is the same. This is a Potemkin town, the second-largest metropolitan area in the nation, and behind the Equinox windows and fast-food drive-throughs, it is empty.

Mayor Eric Garcetti, a Democrat, called for his own citywide stay-at-home order just before Newsom extended the policy statewide. So Angelenos have had a bit more time to adjust.

Garcetti gave a dire warning on NBC's "Today" show Friday, saying the city's hospitals are about to be "overwhelmed" by coronavirus cases.

Some residents said they are trying to stay informed and are taking it one day at a time.

"We're just trying to stay calm and keep up with the situation," said Sam Plouchart, a 38-year-old real estate agent taking his 2-year-old son Casimir for an afternoon walk in a jog stroller.

Plouchart said he has been turning to government documents for information rather than the news or social media, which he has found confusing and misleading.