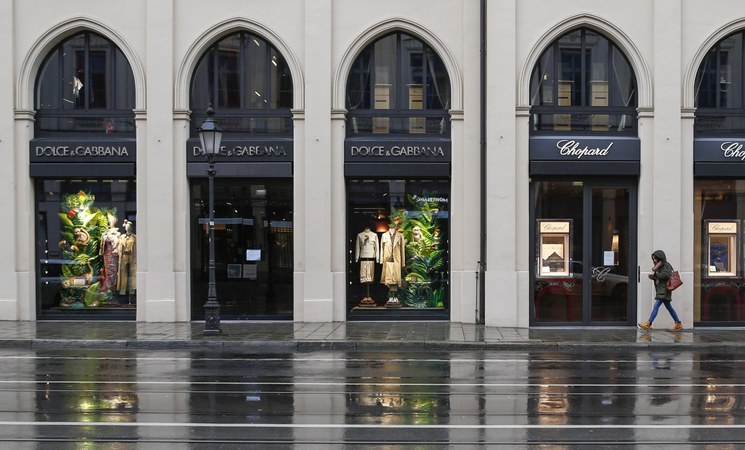 A pedestrian passes by a Dolce & Gabbana Srl store in Munich on Saturday. MUST CREDIT: Bloomberg photo by Michaela Handrek-Rehle

Chancellor Angela Merkel's government is putting together a package of measures ahead of a cabinet meeting Monday as it readies more than 150 billion euros ($160 billion) in new debt financing to help stem the economic fallout of the coronavirus pandemic.

Measures being considered include direct assistance to companies and low-income earners, according to a person familiar with the status of the talks as of late Friday. The discussions are ongoing and the final proposal could still change. Finance Minister Olaf Scholz told Frankfurter Allgemeine Sonntagszeitung the measures will increase the 2020 budget by about 40% and will primarily be used to grant credit to companies and finance shorter work weeks.

A separate rescue fund for companies that the government is also planning could swell to around 600 billion euros, including 100 billion euros for direct stakes in companies, the Handelsblatt newspaper reported.

As the devastating implications of the pandemic become clear, Merkel's ruling coalition is abandoning a long-standing commitment to balanced budgets and using emergency powers to suspend rules restricting borrowing that are enshrined in the constitution. Europe's largest economy is lurching toward a nationwide lockdown, with the number of confirmed infections in Germany heading toward 20,000.

The new debt, equivalent to almost 4.5% of the economy, would be part of a supplementary budget to be approved by Merkel's cabinet in an emergency session and could move on to parliament on Wednesday.

The government is poised to ask parliament for emergency authorization for sweeping spending leeway, people with direct knowledge of the discussions said Thursday. The historic move would be necessary under German law, which caps outlays under normal circumstances via a constitutional mechanism, known as the debt brake, which only allows for excess spending in crisis situations.

Earlier Friday, Bavaria led the way in tightening restrictions on citizens in an effort to stem the spread of the disease. Other regions, including Baden-Wuerttemberg, Rhineland-Palatinate and Hesse, quickly followed. A senior minister in Merkel's cabinet warned that if people continue to socialize, all Germans -- apart from those who work in essential services -- may be told to stay in their homes unless they are shopping for food.