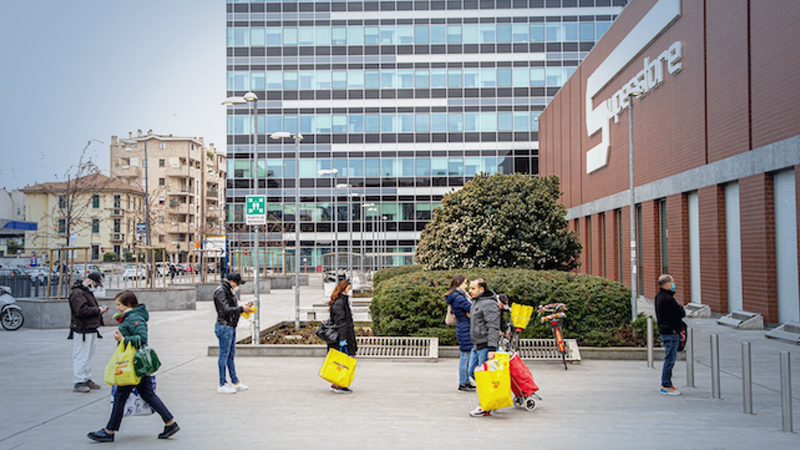 Global anxiety over the coronavirus centered on Europe on Saturday, where Italy is bearing the brunt of the pandemic's unceasing spread. Italian officials announced that 793 people had succumbed to the virus in a single day. The staggering number brought the nation's total dead to more than 4,800, the most for a single country.

As death tolls mount across the continent, Italy has become a symbol of the enormous challenges facing public health authorities in Europe and in the United States, who are struggling to contain the virus.

Eleven days into Italy's nationwide lockdown, which includes travel restrictions and the closure of most stores apart from groceries and pharmacies, the number of confirmed cases still soared, with 6,557 new cases since Friday. Hospitals and morgues were overwhelmed. The government has reported 53,578 total cases, concentrated in the northern part of the country.

Italy's struggle to keep up with the virus offered a glimpse into what U.S. health officials fear could be ahead in New York and elsewhere: shortages of respirators, basic medical equipment and beds in intensive-care units.

Among the help coming to northern Italy is a team of 65 Cuban doctors and nurses with experience in battling Ebola outbreaks, Italian health officials said. In Bergamo, among the most devastated areas, military trucks have lined up outside a hospital to take the dead to faraway crematoriums.

Italy now stands atop a grim list of global statistics, surpassing the death toll in China, where the virus originated. But surging rates of infection were not limited to the country.

In Spain, nearly 5,000 new cases were reported Saturday. The nation's death toll, which was about 1,000 on Friday, ticked up to 1,326 in a single day. Spain's military was called in to convert a convention center in Madrid to a field hospital with 5,500 beds.

Dutch authorities recorded a massive rise, as well, with 637 new cases, bringing the total to more than 3,600, Reuters reported. The death toll in the Netherlands now stands at 136, with 30 new fatalities reported on Saturday alone.

Ireland's total confirmed infections rose to 785, with 102 new cases reported on Saturday, according to officials. And in the United Kingdom, health authorities announced just over 5,000 positive cases and 233 deaths.

Across Europe, borders have been sealed and authorities have deployed police to fine those breaking the widespread stay-at-home rules. Italian officials initially planed to keep their restrictions in place through April 3.

But Prime Minister Giuseppe Conte - like many other world leaders - have left open the possibility that the shutdowns could extend longer.

"This is a marathon, not a sprint," tweeted Milan's mayor, Giuseppe Sala.

In the U.S., public health officials warily eyed the growing wave in Europe and braced for a surge of patients at hospitals expected in the coming days. Trump administration officials, in a briefing from the White House, pleaded with Americans not to seek out a test for coronavirus unless they were showing symptoms of infection.

"Not every single person in the United States needs to get tested," said Anthony Fauci, the director of that National Institute of Allergy and Infectious Diseases, who has become the administration's most visible explainer of its approach to battling the coronavirus.

The caution against unnecessary testing was driven in large part by a shortage of protective equipment for health care workers, including face masks and gowns, who are conducting tests and racing to preserve equipment for ill patients.

Cash-strapped hospitals warned that without some financial assistance, they might fail to pay workers within weeks and could be forced to close as patients are rushing to get care.

In especially hard-hit areas of the country, such as California and New York, officials have restricted the test to health care workers and people in the hospital, so that protective equipment can be conserved for the most pressing cases.

State officials were also preparing to implement the kinds of restrictions on movement seen in Europe, which U.S. health officials said are the best chance to blunt the effects of the pandemic.

Illinois, New York and California leaders have ordered all their citizens to remain in their homes and limit their travel only to essential matters. There have been at least 55 coronavirus deaths in the U.S., one quarter of them in senior-care facilities, a Washington Post review found.

But the number of confirmed cases has also rocketed as tests become more widely available.

Confirmed cases in the U.S. exceeded 20,000 on Saturday, according to a Washington Post count, with about half those cases in New York.

That spike in cases was expected, health officials said, but it has also alarmed state and local leaders, some of whom have looked to Italy as a cautionary tale about waiting too long to implement strict measures on the population.

"We are doing more tests than any other state," Gov. Andrew Cuomo, a Democrat, said in a tweet Saturday. "So we know the numbers will go up. But that's a good thing - we are identifying positive cases."

Every state has now recorded cases, with the second highest number in Washington state, at 1,524. West Virginia claimed the lowest number, with eight confirmed cases.

As all signs pointed to a major escalation in the national health crisis that has consumed the capital, the Trump administration was preparing an unprecedented financial package to help recover from a sudden economic arrest, with businesses shuttered and consumers limiting their spending to groceries and household essentials.

Larry Kudlow, Trump's senior economic adviser, said a rescue package could ultimately top more than $2 trillion. That would constitute the single most expensive fiscal stimulus in the history of the nation.

Administration officials met with lawmakers on Capitol Hill on Saturday to negotiate the legislation. Kudlow, the director of the National Economic Council, told reporters that the measure "is coming in at about 10 percent of GDP - it's a very large package."

Part of the money is intended to capitalize emergency lending by the Federal Reserve, so that it could make hundreds of billions of dollars in new loans.

The package also included direct cash payments to Americans. Individuals earning up to $75,000 per year, or people filing jointly who make up to $150,000, would be eligible to receive $1,200 per person. Americans would also get $500 for every child.

Those with higher incomes would receive less, and anyone making more than $99,000 or $198,000 jointly wouldn't receive any payments.

This huge rescue package is only a starting point. Republicans will now negotiate with Democrats over the fine points of the measure, and which approaches to take as Washington seeks to catch an economy in free fall.

"We need to take further steps to continue addressing our nation's health-care needs," McConnell said. "And we need to help protect American workers, families and small business from this unique economic crisis that threatens to worsen with every single day. We need to have the American people's backs."

In response, House Speaker Nancy Pelosi, D-Calif., said Democrats would sign a bill with "new, strong and strict provisions that prioritize and protect workers, such as banning the recipient companies from buying back stock, rewarding executives, and laying off workers." At the White House, Trump said he was opposed to companies using government funds to buy back stocks.

"We look forward to working in a bipartisan way to deliver for the American people as soon as humanly possible," Pelosi said. Administration officials and lawmakers from both parties have said they hope to come to a final agreement within days.

But key parts of the administration's plan for fighting the virus remained undetermined and apparently stalled, at a time when health care workers were growing more frustrated with critical shortages of masks and other vital equipment.

At the White House briefing on Saturday, reporters repeatedly asked the president and his top advisers when doctors and nurses could expect to receive more N95 masks, which are suitable for treating coronavirus patients, as the administration has assured they will.

One after another, officials were unable to answer. Vice President Mike Pence deferred to Peter Gaynor, administrator of the Federal Emergency Management Agency, who offered no clear timeline, even after Trump himself pressed on the question. Fauci said he hoped it would be a matter of days.

The briefing also saw the president make hopeful statements about drugs to treat symptoms caused by the virus. But senior officials later had to modify those remarks, some of which appeared to puzzle Fauci, who has often had to articulate in direct terms what administration officials have struggled to convey.

Fauci was asked about one of Trump's tweets on Saturday morning, in which the president said that two currently available drugs "taken together, have a real chance to be one of the biggest game changers in the history of medicine."

"I'm not totally sure what the president was referring to," Fauci said, after Trump had left the podium and his aides continued briefing reporters. But he said he believed Trump was referring to a single, anecdotal study that showed that a combination of the drugs hydroxychloroquine, an anti-malarial, and azithromycin, an antibiotic, were effective in combating coronavirus infection.

"There are those who lean to the point of giving hope and saying give that person the option of having access to that drug," Fauci said. "And then you have the other group, which is my job as a scientist, to say my job is to ultimately prove without a doubt that a drug is not only safe, but that it actually works."

Earlier, Trump had seemingly encouraged people to try using the drug before it was shown to be effective.

"I feel like, as the expression goes, what do we have to lose?," Trump said. "Because, you know, I feel very I feel very good about it."

The Food and Drug Administration hasn't approved any drugs for the treatment of Covid-19, the disease caused by the coronavirus.

Trump also repeated his earlier predictions that the U.S. would soon be through the worst of the pandemic, even though state officials and health experts have offered more dire assessments and have warned that even if the U.S. effectively reduces the number of infections, coronavirus could reappear later in the year.

In another sign of the infection's reach, Pence announced that he and his wife, Karen, would both be tested for coronavirus after a member of his staff tested positive.