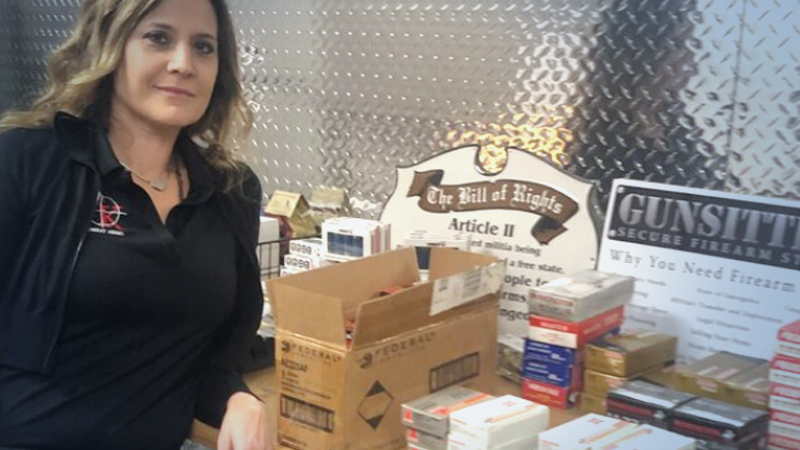 Kat O'Connor, owner of TK Defense in Gaithersburg, Md., says she has been inundated this past week with calls from "hundreds" of Maryland residents looking to buy "home defense" weapons and from people wanting to stock up on ammo. MUST CREDIT: Washington Post photo by Paul Duggan

Behind an unmarked metal door in a Maryland industrial park, in the bunker-like space where Kat O'Connor runs her gun business, boxes of ammo were stacked on a desktop and a table early Friday, awaiting customers.

In this spring of pandemic and social upheaval, bullets for home defense are as precious to some folks as toilet paper and Purell, and just as scarce lately. After canvassing distributors, O'Connor had managed to get hold of 7,000 rounds, most of which would be gone by closing time.

"OK, so I got 9-millimeter over there," said O'Connor's helper, Dave Fullarton, ushering in the morning's first buyer, a fellow in his 30s wearing a T-shirt with the logo of a construction company. "And I've also got Hydra-Shoks over here. Now, those are law-enforcement-grade hollow points."

The man smiled, sounding relieved. "Amazing! Is there a limit on how much I can -"

"Buy as much as you want!" said Fullarton.

He gathered four boxes of PMC Bronze 9mm cartridges, 200 rounds in all, and 50 of the high-velocity 12-gauge shotgun shells that O'Connor makes herself.

Leaning toward her, he said quietly of the shells, "These'll get the job done if need be?"

And he grinned again.

Many gun buyers seem worried that the exponential spread of covid-19 will lead to a season of hard-to-find essentials - of illness-related disruptions in the grocery supply chain - with angry have-nots out to steal from the haves. Perhaps, more likely, Americans will weather the crisis peacefully. In any event, many appear to think it is better to be safe than sorry.

From Phoenix to Upstate New York, from Idaho to South Florida, firearms dealers reported surging sales in the past week as customers fretted about the future. "They just say, 'I want a gun, I want a gun,' " a store owner in New Jersey told the Star-Ledger of Newark. "They're coming apart at the seams, these people." Speaking to the Charlotte Observer, a North Carolina merchant said, "Our new motto is, 'Dedicated to helping you protect your toilet paper.'"

The National Instant Criminal Background Check System said it responded to inquiries on 2.8 million prospective gun-buyers last month - the third-highest monthly total since the system was created in 1998, and up from 2 million in February last year. With crowds nearly wiping out firearm and ammo inventories at some stores since President Donald Trump's March 13 declaration of a national coronavirus emergency, this month's gun-buyer total could be even larger.

O'Connor has a federal firearms license, or FFL, but she is not a gun retailer. Instead, she serves as a go-between for Maryland buyers and out-of-state sellers. Under federal law, buyers can purchase guns only from FFL-holders in the states where they reside. If you live in Rockville, Maryland, and see a gun you want online, you can have it shipped to O'Connor, at TK Defense, and she'll complete the sale for a fee.

Nor does she normally sell ammunition, except for the shotgun shells she manufactures at her place of business, a 1,500-square-foot fortress in a Gaithersburg industrial park, where she also stores people's firearms in vaults and teaches handgun-safety classes.

These aren't normal times, though.

"Literally every five minutes since Monday, the phone rings," O'Connor, a 40-something mother of five in tactical trousers with a Glock 17 on her right hip, said Friday. "They're like, 'Do you have ammo?!' Because it's so hard to get. I'm like: 'What do you need? I'll try to get it for you.' They're like, 'What can you get?' They'll take anything."

Others want her help in beginning the roughly month-long process of obtaining a handgun qualification license, or HQL, from the Maryland State Police. You can't legally buy a pistol in the state without getting an HQL, which involves, among other things, taking a four-hour safety class with a certified instructor such as O'Connor.

Fullarton, 55, nodded happily, as if the country was at last awakening to the necessity of firearms. "There's a lot who haven't ever thought about it," he said. "But now they've started considering: What if the unthinkable happens? They're stocking up on food and water and paper towels, and they're realizing they have to protect what they have in case of a societal collapse."

In Virginia, Martin Orenge, manager of Dominion Arms in Manassas, said the shop is struggling to keep pace with demand. He said inventory was already low because of a sales spike that began in mid-winter, when newly empowered Democrats in state government were pushing a slate of proposed gun-control laws, some of which have since been enacted. Now the coronavirus crisis has generated a fresh wave of customers.

"I can't keep anything in stock," Orenge said. "Everybody wants everything. ... I have four or five handguns left and hardly any ammunition."

He said the nationwide rush to buy guns has left suppliers with weeks-long backlogs of orders. In the store, meanwhile, shoppers have been diligent about keeping the proper social distance from one another and using the hand sanitizer he puts out. "We're running low on that, too," Orenge said.

About 15 miles away, at Vienna Arsenal, salespeople wore protective gloves Thursday, but social distancing was impossible, given that the store was packed.

A 59-year-old customer named James declined to fully identify himself because, he said, he doesn't want it publicly known that he is gearing up against the potential demise of civic order.

"I think it's very, very simple," he said. "You just don't know what's going to happen. It's a pandemic, and people don't seem to be taking it seriously."

James has heard projections of an eventual 20 percent unemployment rate. "This is unique," he said, envisioning the day, maybe soon, when "we have food and others don't." If that time comes, he said, "I want to be able to protect my family."

By close of business Friday at TK Defense, about 30 customers had bought most of the ammo that O'Connor rustled up - handgun and rifle bullets in various calibers, plus shotgun shells, including a type for close-range, in-home defense "that won't go through walls, won't hit a neighbor's house, things like that."

A friend tipped her about an ammo distributor in New Jersey "who's getting a couple of truckloads, so I'll go up there next week and restock if there's still a demand."

As customers came and went, none cared to chat about the pandemic or the perils it might pose for family safety and security.

"Sorry, not comfortable," said one.

"I never give interviews," said a man in a plumber's truck.

Six people signed up for the safety course, twice the number of handgun-license applicants typically on O'Connor's schedule. And calls kept pouring in from out-of-state dealers arranging to ship firearms to her for transfer to Maryland buyers. "A lot more than normal," she said. "I mean, I don't even know what's coming. Everything under the sun."

Personally, O'Connor said, she doesn't think an apocalypse is at hand. She smirked at the idea.

But she is glad that most of the would-be first-time pistol owners who contact her are surprised and distressed to learn that it takes about a month to get a handgun qualification license. She said maybe the health crisis will generate a groundswell of public support for streamlining the process, which, in her view, is so slow that it is a threat in itself.

"A lot can happen in four weeks while you're waiting," she said. "It's really dangerous, and people feel scared when they don't feel protected. Having a firearm in the home gives them peace of mind.

"They know, OK, no one is going to come in and terrorize us."