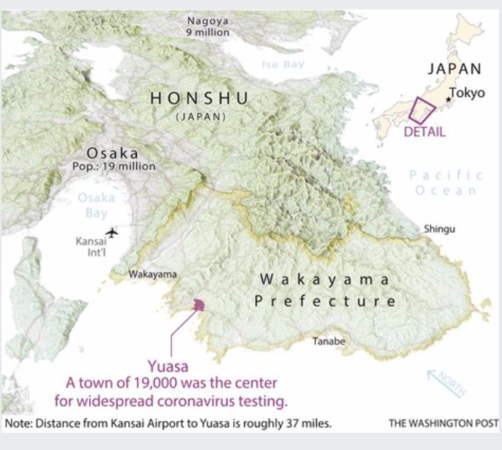 TOKYO - It's being called in Japan the "Wakayama model" - how one district broke with the government, adopted its own strict coronavirus testing policies and managed to win one local battle against the global pandemic.

It's a lesson in how nimble thinking and concerted action - grounded in fast, well-targeted testing and tracing - can beat back the novel virus and break its chain of transmission. As the coronavirus strains governments and medical networks around the world, the stand in Wakayama underscores some of the core elements in the fight: aggressive testing and contact tracing.

A doctor in the western Japanese prefecture of Wakayama started feeling unwell Jan. 31. He didn't think too much. At the time, the coronavirus was mostly spreading among people who had been to China or knew someone who had.

For three days, he took pills to keep his fever down and kept going to work in the small town of Yuasa. There were - as always - a long line of patients waiting to see him.

But the doctor, who cannot be named under Japanese guidelines to protect the privacy of infected people, soon began to realize he didn't have a typical case of flu. He stayed home. A chest X-ray showed a shadow on his lung.

Before long, four more people in Yuasa had fallen ill, including three patients and another doctor at the hospital.

This was looking bad. Could this be an outbreak of the coronavirus in a hospital, among staff tending the sick and elderly?

Japanese government guidelines at the time were clear. Coronavirus tests known as PCR, or polymerase chain reaction, were in short supply in Japan and reserved mostly for people who had been to China recently, or been in contact with another confirmed case.

None of the sick people in Wakayama met these criteria.

Japanese bureaucrats are famous for following the rules. But Japan's southwestern region of Kansai is a little bit different, a place where people take pride in their independence. Wakayama prefecture has an independent politician in the governor's office, Yoshinobu Nisaka, who said he doesn't follow government guidelines and prefers to take an "original approach."

Wakayama - renowned for winding mountain paths, Buddhist pilgrimage trails and picturesque ports - is one of the nation's spiritual heartlands. It also found its own voice in how to confront one of the greatest health threats in generations.

"In this prefecture we had decided to respond to the situation flexibly, thinking that solely focusing on those who had previous contact with Chinese would make it difficult to discover infected cases," said Takako Nojiri, who runs the prefecture's health department and had the crucial say in who could be tested for the coronavirus.

Even before these cases emerged, "we'd decided to rely on the opinion of the doctors on the front line," she said.

And that opinion was clear. This was "pneumonia with unknown causes." She gave the green light. First the doctor who first fell ill was tested for the coronavirus. And then the other four people.

Even as the other tests were coming in, the governor Nisaka called a news conference Feb. 14, the first of many he would hold on the virus. Everyone the doctor had been in contact with would be traced, he said.

The news sent shock waves through the medical community in Tokyo.

Suddenly, Japan had a homegrown coronavirus problem, a case with no obvious link to China. Infectious disease specialists call it "an invisible chain of transmission."

Japan's Health Ministry was already under intense pressure to expand testing of suspected coronavirus patients. On Feb. 17, it relaxed the rules, announcing that doctors could refer anyone with worrying symptoms to have a PCR test, regardless of previous contacts or travel history.

In the meantime, Wakayama wasn't done bending the rules.

Under the Health Ministry's approach at the time, not everyone who had been in close contact with an infected person was being tested. Many such people were simply told to stay home and monitor their health.

The hospital in Yuasa had been closed to outpatients after the tests, but Nisaka and his health department knew they needed it working again, and fast. And everyone who might have been infected needed to be tested.

"We had to return the hospital to how it was, as soon as possible," Nisaka said in an interview.

Officials started to track down everyone who could have been in contact with the doctors - nurses, part-time staff, patients, family members, even workers at small businesses supplying goods to the hospital.

"It was hard," the health department chief Nojiri said. "The first challenge was to grasp the entire picture, which took time. Just to see how many people to target - it is not as though there were directories (of how to find them)."

Staff at public health centers interviewed people to find out who had could have been in contact with the virus. It took three days to trace everyone, and up to 11 more days to get specimens for testing, she said.

The list had swelled to around 470 people, an enormous number at a time when Japan was only doing a few hundred tests a day, outside the Diamond Princess cruise ship under quarantine in Yokohama.

So Nisaka had to take up the challenge himself, convincing Tokyo to send the chemicals necessary to conduct hundreds of tests. He personally went to the neighboring prefecture of Osaka and convinced the governor there, another independent-minded politician, to open up his labs for 150 tests. The rest were carried out in Wakayama city itself.

Medical staff in Wakayama and Osaka worked round the clock to analyze test results.

"It couldn't have been done any faster," Nojiri said.

By Feb. 25, everyone had been tested, and 10 more coronavirus patients found.

By March 4, the Yuasa hospital, cleaned and cleared of the virus, was reopened to outpatients. In the prefecture, no fresh cases had been seen for two weeks, and the rest of Japan began to look on admiringly at Wakayama's experience and to wonder what lessons it could learn.

"The first lesson is to take goal-oriented action, the second is to do so at very high speed," Nisaka said. "Action has to be logical, it has to be thorough, and it has to be fast."

But Wakayama's vigil against the coronavirus is far from over.

In early March, a large, new cluster of infections were spotted in Osaka among people who had attended a live music venue. By March 5, a woman from Wakayama, who had been at the club, tested positive.

Nisaka and his team swung into action again. Wakayama city and prefecture officials worked "at ferocious speed" to trace everyone who had been in contact with the infected person, and everywhere she had been.

Japan's railway stations were disinfected in Wakayama. In another decision that broke with Japan's privacy rules, the governor named the employer of the new Wakayama patient and made sure all her colleagues were tested. All were negative, but have still been asked to avoid public transportation and work from home for four weeks.

"We will remain at maximum vigilance," Nisaka wrote in a message to the people of Wakayama. "If we see another case, we must join hands and work together with our full force, just we did before. Even then, don't we have this? The hope that we've won after our fierce efforts."

On Thursday, another person tested positive in Wakayama, a man in his 50s.