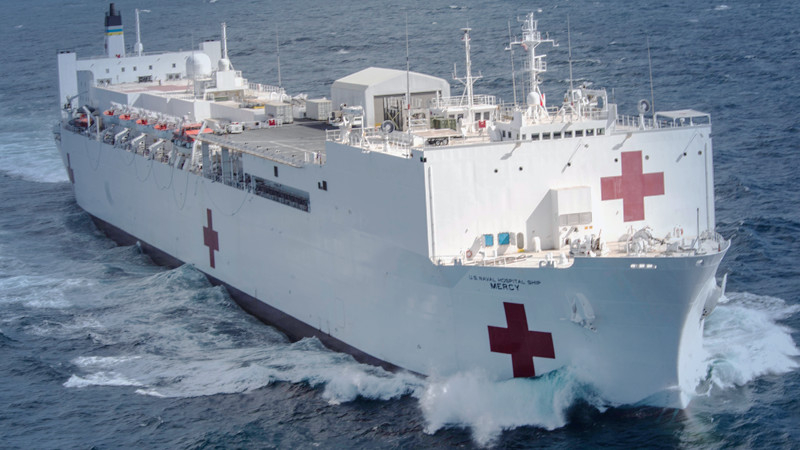 The U.S. Navy dispatched a 1,000-bed military hospital ship to Los Angeles to aid the nation's second-most-populous city as its medical facilities scramble to cope with the coronavirus pandemic.

The USNS Mercy, a cruising hospital with 15 patient wards, a full blood bank, 80 intensive-care beds and accommodations for more than 1,300 people, departed San Diego on Monday afternoon and was scheduled to arrive in the Port of Los Angeles this week after conducting required tests and certifications at sea.

The floating naval hospital will not treat patients with covid-19, the disease caused by the novel coronavirus. Instead, according to Navy officials, the vessel will function as a "relief valve" for Los Angeles-area hospitals by accepting transfers of patients with other illnesses. The goal is to free up capacity at the city's civilian hospitals to treat patients infected with the virus.

"Essentially every patient transfer will be an inter-hospital transfer - a patient that is already an inpatient in one of the local hospitals will be transferred to us," Capt. John Rotruck, the commanding officer of the medical treatment facility aboard the ship, said in a pre-departure briefing Monday.

Rotruck said the professionals manning the hospital ship had been "screened," but not tested, for covid-19 before departure. Any person aboard the ship who is identified as having the disease will be removed from the vessel and cared for on land, Rotruck said.

Cruise ships were identified by medical professionals as some of the "petri dishes" that aided the initial spread of the coronavirus, one reason the USNS Mercy won't treat infected patients on board. Rotruck said the ship's personnel would be practicing infection control measures every day.

The ship will bring 1,128 personnel as part of its medical treatment facility, in addition to other support staffers operating on the vessel and on land. The Federal Emergency Management Agency is coordinating with hospitals in Los Angeles to enable patient transfers.

"FEMA is the lead agency, and they are responsible for our site picture of the needs and requirements of the local hospitals," Rotruck said. "So we will take our direction from them."

Rotruck said the ship would welcome patients into its intensive- and critical-care units, and would bring surgical capabilities with multiple operating rooms.

Defense Secretary Mark Esper said Monday that the Pentagon has been careful about calling up reservists, to ensure that anyone called up isn't being taken away from serving critical front-line medical functions in his or her own community or within the military.

"The men and women of the Mercy are highly trained professionals and are eager to join this fight," Esper said, noting that he had spoken to the captain of the ship and the captain of the USNS Comfort, another naval hospital that President Donald Trump has said will be sent to New York.

It is unclear how quickly the Comfort will be deployed; it had been undergoing maintenance. In the meantime, the Pentagon is dispatching an Army field hospital to New York City, and the Army Corps of Engineers is assisting FEMA in converting facilities there into makeshift hospitals.

Initially, Esper had suggested that the USNS Mercy would deploy to Seattle. On Monday, however, he said that FEMA - which is in charge of analyzing the disaster response on the ground and prioritizing the distribution of Pentagon resources - decided to send the ship to Los Angeles instead.

Esper said the Defense Department won't be able to meet the needs of all states and municipalities as the virus spreads, and he added that it would be up to FEMA to decide how and where to deploy the resources the Pentagon can offer.

For example, the Pentagon has authorized the delivery of 5 million masks and 2,000 ventilators from its strategic reserves to FEMA, which will then decide how and where to deliver the items, after evaluating need by a set of eight criteria, Esper said.

Navy officials operating the USNS Mercy said the ship was prepared to treat patients as long as necessary, and potentially could move on to other U.S. cities after Los Angeles. As of Sunday, Los Angeles County had identified 409 confirmed cases of covid-19, including five people who have died.