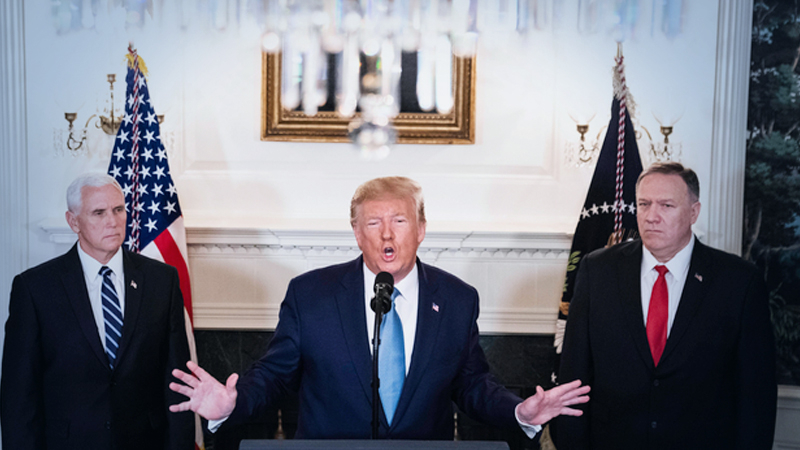 KABUL, Afghanistan - With a crisis in the Afghan government threatening to derail a peace deal signed last month between Taliban and U.S. officials, Secretary of State Mike Pompeo made an unannounced visit here Monday in hopes of resolving a clash between President Ashraf Ghani and his main rival, Abdullah Abdullah, who is attempting to form a parallel government.

Pompeo spent the day meeting privately with both leaders, first separately and then together, before leaving the country less than nine hours after he landed. There was no immediate indication from U.S. or Afghan officials as to how much progress his efforts had made.

But the secretary's sudden trip from Washington, even with the novel coronavirus upending life in the United States and consuming its government, was a dramatic indicator of U.S. officials' growing alarm at the lengthening political stalemate here - both for its potential to erupt into a violent civil conflict and to undermine the peace process.

The agreement signed Feb. 29 between U.S. and Taliban officials was expected to allow thousands of U.S. troops to begin leaving Afghanistan soon and to pave the way for negotiations between Taliban and Afghan leaders on a shared government in the future. Instead, both plans have bogged down, and no date has been set for the talks.

"Unless this crisis gets resolved and resolved soon, it could affect the peace process, which was an opportunity to end . . . 40 years of war. And our agreement with the Talibs could be put at risk," a senior State Department official told journalists traveling with Pompeo, speaking on the condition of anonymity to be candid.

The official said Pompeo's "authority" as the top U.S. diplomat and a close adviser to President Trump gives him more potential influence than other intermediaries on Ghani and Abdullah, who are bitterly estranged after co-governing for five years. In recent weeks, both Zalmay Khalilzad, the U.S. diplomat spearheading the peace talks, and senior Afghan political and religious leaders have tried to find a compromise - to no avail.

Even with "a lot going on," including the coronavirus pandemic, the official said, Pompeo had "come all the way here" to "push" both Afghan leaders to form an inclusive government and to stress the dangers that could result "if they don't do the right thing." The official said there was particular concern that the Afghan defense forces could split between "two presidents and two commanders in chief, or worse."

What the Trump administration wants is for Ghani and Abdullah to agree on an "inclusive government that is acceptable to both," the official said. "We are encouraging them to rise to the occasion" and "put the country first."

After back-to-back meetings, with Pompeo shuttling between Ghani's and Abdullah's palaces - one block apart - and then meeting them together, no official statements were made.

Pompeo then flew to Qatar, where he met with the Taliban's chief negotiator, Mullah Baradar. The two men spoke for about an hour at Al Udeid Air Base in Doha, where Pompeo pressed the Taliban "to continue to comply with the agreement signed last month," said State Department spokeswoman Morgan Ortagus.

The department did not immediately release details of the substance of the meeting.

The political crisis arose after the presidential election in September. Ghani, the incumbent, was declared the winner last month, but Abdullah alleged massive fraud and refused to concede. The two have been locked in a tense stalemate for two weeks, while Abdullah, backed by an array of former ethnic minority militia leaders, has begun naming his own governors and cabinet members.

Meanwhile, no progress has been made on forming a government delegation to meet with the Taliban, even though those talks were scheduled to begin March 10. In a separate dispute, Ghani has refused to immediately release 5,000 Taliban prisoners as the U.S.-Taliban agreement stipulated, throwing that deal into doubt as well, and leaving unclear if and when American troops can begin pulling out in large numbers.

Pompeo's mission is eerily reminiscent of what transpired after the last Afghan presidential election, in 2014, when then-Secretary of State John F. Kerry successfully mediated an identical spat between Ghani and Abdullah. Both claimed to have won the presidency in a fraud-marred election, but Kerry persuaded them to accept a power-sharing arrangement. It has proved tense and fractious.

Pompeo also raised the prisoner-release issue with Ghani, which Khalilzad has been trying to work on over the past week. Over the weekend, he facilitated a video conference between Taliban and Afghan prison officials on the "technical" aspects of a proposed release, but no plan was finalized.

Pompeo, who attended the signing of the peace agreement in Qatar, said at the time that the path forward would be "rocky" and that talks between Taliban and Afghan leaders would be difficult. But he also said that while Taliban leaders have "an enormous amount of blood on their hands, they have now made a break" with their past and promised not to allow anti-U.S. terrorist activities on Afghan soil.