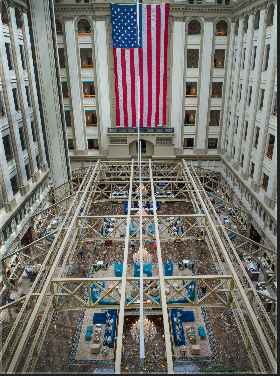 President Donald Trump's private business has shut down six of its top seven revenue-producing clubs and hotels because of restrictions meant to slow the spread of the novel coronavirus - potentially depriving Trump's company of millions of dollars in revenue.

Those closures have come as Trump is considering easing restrictions on movement sooner than federal public health experts recommend, in the name of reducing the virus's economic damage.

In a tweet late Sunday, Trump said the measures could be lifted as soon as March 30. "WE CANNOT LET THE CURE BE WORSE THAN THE PROBLEM ITSELF," he wrote on Twitter.

In his unprecedented dual role as president and owner of a sprawling business, Trump is facing dual crises caused by the coronavirus. As he is trying to manage the pandemic from the White House, limiting its casualties as well as the economic fallout, his company is navigating a major threat to the hospitality industry.

That problem could to pull Trump in opposite directions because the strategies that many scientists believe will help lessen the public emergency - such as strict, long-lasting restrictions on movement - could deepen the short-term problems of Trump's private businesses by keeping doors shut and customers away.

The White House and the Trump Organization did not respond to questions Monday.

The company, which Trump says is run day-to-day by his sons Eric and Don Jr., has not said whether it will apply for a bailout of the hotel industry, if Congress creates one.

Neither has Trump. On Sunday, he was asked whether his business would abstain from any federal government bailout. He did not give a clear answer. "Everything's changing, just so you understand, it's all changing," Trump said. "But I have no idea."

Trump's business includes commercial office buildings, which have long-term leases and should not be hurt as immediately by the virus. But he is also heavily invested in the hotel business, with 11 hotels around the world.

That business needs new people walking in the door every day, to eat and stay. And by keeping people away, the coronavirus has brought that industry its worst downturn in recent history.

"The data is bad. And we haven't seen the worst of it yet," said Jan Freitag, a senior vice president with the firm STR, which analyzes hotel industry data. He noted that the damage to the industry is being caused by the lockdowns and the fear of the virus. "What we're seeing here is a rapid descent that's going to last. So it's going to be a little bit of a worst-case combination of post-9/11 and [the financial crisis of] 2009."

So far, the Trump Organization has closed hotels in Las Vegas; Doral, Florida; Ireland; and Scotland - as well as the Mar-a-Lago Club in South Florida and a golf club in Bedminster, New Jersey. Many of the clubs closed because they had to, under local orders. Others closed on their own, following strong guidance or recommendations from local officials.

Those are six of Trump's top seven revenue-producing clubs and hotels, bringing in about $174 million total per year, according to Trump's most recent financial disclosures. That works out to $478,000 per day - revenue that is likely to be sharply reduced with the clubs shuttered. The disclosures provide self-reported revenue figures but not profits.

Another of Trump's golf clubs, in Aberdeen, Scotland, appeared likely to shut down soon, after an order from British Prime Minister Boris Johnson that "nonessential" shops close and that people leave home only to buy food, buy medicine or exercise alone.

The Trump properties that remain open have been sharply affected: In Chicago, New York and Washington, the restaurants have been closed, cutting off a key source of revenue.

On Monday, the managing director of the Trump hotel in Washington, Mickael Damelincourt, sought to find humor in the situation - posting a photo on Twitter that showed him and the chef of the District of Columbia hotel's restaurant, BLT Prime. They were standing six feet apart, at the door to the empty steakhouse. "Working safely on [the hotel's] next chapter," he wrote.

There is also a BLT Prime in Trump's Doral resort, where restaurants closed last week to comply with lockdown orders. The steakhouse told the state of Florida in a public filing that its entire 98-person workforce - six bartenders, 16 busers, 24 captains, eight hosts, six managers, eight runners, four chefs, five dishwashers, 18 line cooks and three pastry chefs - had been laid off.

"These [layoffs] are anticipated to be temporary," BLT Prime told the state. "However, unfortunately, at this time, we cannot predict when the restaurant will reopen."

Three of Trump's hotels - in Doral, Chicago and Washington - have loans from Deutsche Bank that originally totaled more than $300 million. Before the coronavirus outbreak, all three reported lagging behind their peers in occupancy and revenue, struggles that the company's representatives blamed, in one way or another, on Trump's political rise.

In Chicago, the city has begun a program to use some now-empty hotel rooms to house people who have the virus - but do not need hospital care - as well as people awaiting virus test results. That effort will be a lifeline for some hotels, with the city paying about $175 per night, the mayor's office said.

The Trump hotel in downtown Chicago is not part of the program "at this time," a spokesman for Chicago Mayor Lori Lighfoot, a Democrat, said Monday.

If the president were to loosen restrictions on movement in the name of restarting the U.S. economy, that would probably increase the number of people staying in hotels, said Freitag, the hotel industry analyst from STR.

But, Freitag said, it would not be likely to change that much, since fear of the virus would keep many people from traveling anyway.

"If people are on the roads, and the virus continues to spread, you basically have a two-class society, right? The people who had it, and the people who don't have it," Freitag said. "It's going to be hard to convince those who haven't had the virus to get back on the road."