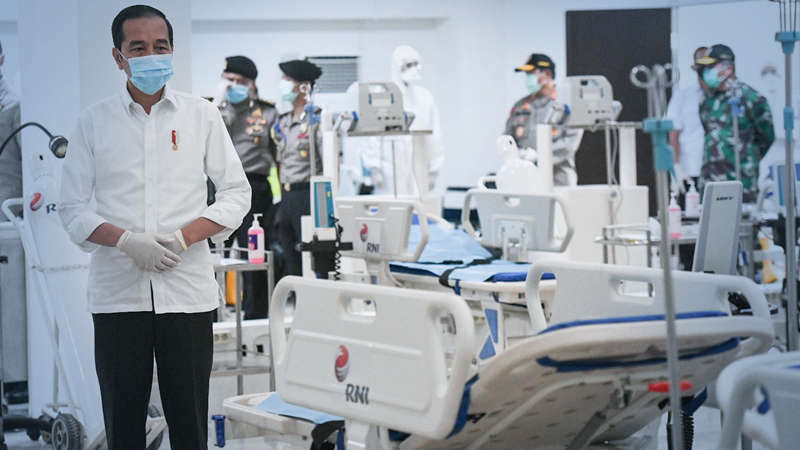 President Joko “Jokowi” Widodo has revealed that government officials and legislators are in talks to raise Indonesia’s budget deficit cap, which would allow the state to borrow more money to fund emergency response measures to the coronavirus pandemic.

Jokowi told reporters on Tuesday that the government and the House of Representatives had been discussing raising the cap over the past few days. He has also held discussions with the Supreme Audit Agency (BPK).

“The point is, we want to relax the state budget and have the political support for when we issue the government regulation in lieu of law [Perppu],” he said. Jokowi previously said the state budget should focus on three things: health care, the disbursement of social funds and economic stimulus.

The House – and several economists – had previously urged the government to issue a Perppu to raise the deficit cap in the 2020 state budget plan. A higher cap would enable the government to step-up development of healthcare systems, disburse more social funds and stimulate the economy to tackle the pandemic. The downside is that Indonesia might spend the next few years paying off more debt.

The chairman of House budget committee (Banggar), Said Abdullah, said on Monday that the government should raise the ceiling from the current 3 percent of gross domestic product (GDP) to 5 percent.

“Almost every macroeconomic indicator has changed significantly due to the spread of the COVID-19 pandemic. The 2020 state budget, as the government’s fiscal instrument, will no doubt change as well,” he said after a teleconferenced meeting with Finance Minister Sri Mulyani Indrawati and Bank Indonesia (BI) Governor Perry Warjiyo.

Macroeconomic indicators that include GDP, inflation and the rupiah exchange rate were predicted to be volatile as the COVID-19 crisis could weaken economic growth to zero percent in the pessimistic scenario, Finance Minister Sri Mulyani Indrawati said.

The baseline scenario was for annual economic growth this year to be slightly above 4 percent, she added, which would be the lowest rate in 15 years.

The government would reallocate Rp 62.3 trillion (US$3.9 billion) of state spending from the 2020 budget to tackle COVID-19 in Southeast Asia’s largest economy.

The allocated sum is a significant increase from the previous estimate of Rp 27 trillion – on top of the Rp 120 trillion in stimulus packages – as the government prepares for worst-case scenarios including the possibility of zero percent economic growth, ministers said.

“[…] Possible room for Rp 334 trillion additional spending for the Finance Ministry even after accounting for zero growth in state revenues, which we view as quite sufficient to cushion the economy from the COVID-19 outbreak,” Satria added.

The government initially targeted a budget deficit of Rp 307.2 trillion, equal to 1.76 percent of GDP. The 3 percent deficit-to-GDP cap, introduced in the aftermath of the 1997 financial crisis, was introduced to enforce fiscal discipline and minimize credit risks in Indonesia.

“We expect the waiver to be only temporary, with the deficit cap back in place after risks from the Covid-19 outbreak subside,” Satria wrote in a note.

University of Indonesia rector Ari Kuncoro estimated the deficit should be compensated for within three to five years, adding that the priority now was for the state budget to be flexible to solve health issues and counter the negative economic effects of the virus.

“Desperate times call for desperate measures,” the senior economist told The Jakarta Post, adding that the existing state budget limited the government’s ability to spend more on the COVID-19 fight, as it was designed for a normal scenario. “The government should look to implement an intertemporal budget.”

Banggar chairman Said suggested another Perppu to make changes to the current income tax law to roll out incentives for individual taxpayers to give them breathing space on their finances.

For the haves, however, they would be required to pay Rp 1 billion per person to the National Disaster Mitigation Agency (BNPB) for the COVID-19 response fund as a consequence of lower income tax.

“The important point is to [reduce] income tax to 20 percent for those with savings of more than Rp 100 billion,” Said said.

“This Perppu is meant to support public efforts to recover from the COVID-19 crisis, ensure the implementation of a social safety net program and help informal and small and medium businesses survive in the face of economic hardship.”