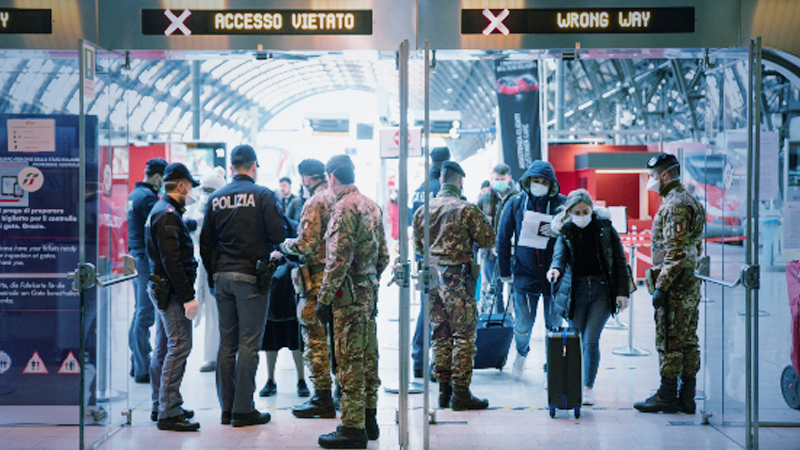 A soccer match last month that sparked euphoria in Bergamo has taken on a much darker relevance in the epicenter of Italy's deadliest covid-19 outbreak.

The Feb. 19 Champions League contest reportedly drew over 40,000 residents of Bergamo to nearby Milan to see their hometown squad, Atalanta, take on Spain's Valencia. Atalanta's 4-1 first-leg victory, in the upstart side's inaugural trip to the knockout rounds of the world's most prestigious club competition, had those closely packed residents and thousands more back home hugging in raucous celebration.

Weeks later, Bergamo has earned the tragic distinction of being the hardest-hit province in the hardest-hit region, Lombardy, of Europe's hardest-hit country. The spread of the novel coronavirus has swelled the daily obituary section in Bergamo's local newspaper from two or three pages to as much as 10 or 11. Intensive care units there don't have nearly enough beds, and Italian soldiers are being deployed to move coffins from Bergamo's overwhelmed morgues.

Among the "sad explanations" for the plight there is the soccer match, the mayor of Bergamo, a town of approximately 120,000 that has the same name as its province, said Tuesday.

"Some 40,000 Bergamo inhabitants went to Milan to watch the game. Others watched it from their homes, in families, in groups, at the bar," said Mayor Giorgio Gori (via Agence France-Presse).

"It's clear that evening was a situation in which the virus was widely spread," he added.

Noting that many traveled on public transportation together from Bergamo before packing into Milan's San Siro stadium, the head of pulmonology at a Bergamo hospital recently described the Champions League match as "a biological bomb."

At the time, few in Italy were greatly concerned about covid-19. Two days after the match was played, though, the country saw its first confirmed death from the illness, and within two weeks Bergamo was reporting a sharp increase in its rate of coronavirus cases.

Regarding the unusually lethal nature of the outbreak there, an Italian immunologist (via Corriere dello Sport) pointed to Bergamo's status as an economic and social center, as well as to the reputation of the region's inhabitants for being hard-working and industrious, suggesting they may have been more inclined than some others to shrug off symptoms of illness and continue with their daily lives.

The immunologist, Francesco Le Foche, also noted that "the timing is pertinent" in terms of when the soccer match took place and how the illness subsequently took off.

"The aggregation of thousands of people, centimeters from each other, engaging in manifestations of euphoria like hugging, shouting, all of that could've favored viral reciprocation," Le Foche said (via Goal). "I have to imagine many didn't want to miss that game if they had tickets, even if they felt a slight fever.

"With hindsight, it was madness to play with a crowd present, but at the time things weren't clear enough. It'd be unthinkable now."

When the second leg of that matchup took place, on March 10, there were no fans in the stands at Valencia's Mestalla Stadium as Atalanta won, 4-3, to reach the Champions League quarterfinals for the first time. Within a few days, Spain would institute a national lockdown, following a similar measure enacted in Italy, and the Champions League would join major sports organizations worldwide in suspending competition.

Six days after the match in Valencia, that club announced that "despite the strict measures" it adopted after traveling to Milan's "high risk" area, 35 percent of its starters tested positive for the novel coronavirus. Atalanta said Tuesday (via Reuters) that its goalkeeper, Marco Sportiello, became the first on its club and the 15th in Italy's Serie A to test positive.

To Bergamo's mayor, the biggest single source of his town's misery was likely a hospital in the region where a patient was admitted without being diagnosed with the coronavirus, enabling him to infect others. However, the soccer match had to have been a factor, Gori claimed, particularly given the lack of urgency with regard to social distancing when it was played.

"We were mid-February so we didn't have the circumstances of what was happening," Gori said (via the Associated Press). "If it's true what they're saying, that the virus was already circulating in Europe in January, then it's very probable that 40,000 Bergamaschi in the stands of San Siro, all together, exchanged the virus between them. As is possible that so many Bergamaschi that night got together in houses, bars to watch the match and did the same.

"Unfortunately, we couldn't have known. No one knew the virus was already here," the mayor added. "It was inevitable."