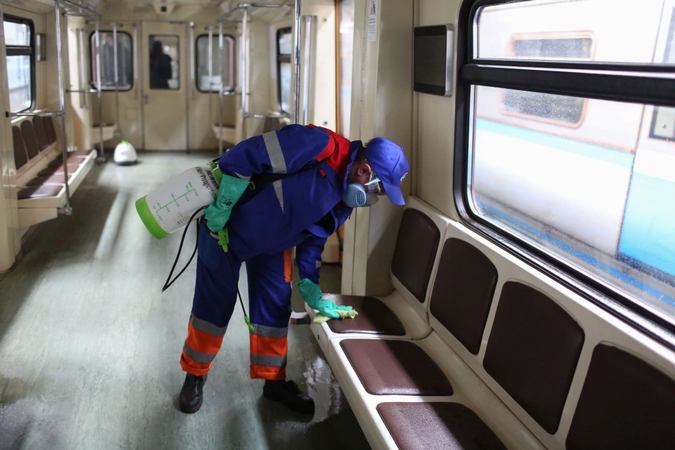 A worker wearing a protective face mask and gloves wipes down seating inside a passenger train on the Moscow Metro in Moscow on March 25, 2020. MUST CREDIT: Bloomberg photo by Andrey Rudakov.

With the extent of Russia's coronavirus epidemic distorted by a lack of testing, Moscow Mayor Sergey Sobyanin ordered restaurants and most stores in Europe's biggest city to shut down for a week.

Restaurants, parks and stores except for pharmacies and food shops in the city of 12.7 million will shut down from Saturday for eight days, Sobyanin wrote on his website Thursday. Confirmed infections in Moscow jumped by a third to 546 over the last day and make up 65% of the country's total.

"The restrictions introduced today are unprecedented in the modern history of Moscow and will create many inconveniences for the everyday life of every person," Sobyanin said. "But, believe me, they are absolutely necessary in order to slow the spread of coronavirus infection and reduce the number of cases."

Russia is taking the outbreak increasingly seriously. President Vladimir Putin on Wednesday declared paid leave for most workers nationwide next week in a bid to reduce contagion and delayed next month's vote on constitutional changes that could keep him in office until 2036 as he faces the biggest public-health crisis of his 20-year rule. The government halted all international flights starting March 27 after earlier limits on travel and visas.

While in Russia "there is de facto no epidemic" and the Kremlin hopes "to be able to avoid one," Putin is cutting back on his domestic travel and canceled a planned trip to St. Petersburg, his spokesman Dmitry Peskov said on a conference call with reporters Thursday.

On Tuesday, Sobyanin told Putin during a visit to Russia's biggest hospital treating coronavirus patients that the official numbers don't reflect the "full picture" given a lack of testing in the country of 146 million people. Moscow's new measures follow the closing of schools until April 10 and a recommendation that people over 65 to stay at home. Earlier in the month, Moscow banned gatherings of more than 50 people indoors.