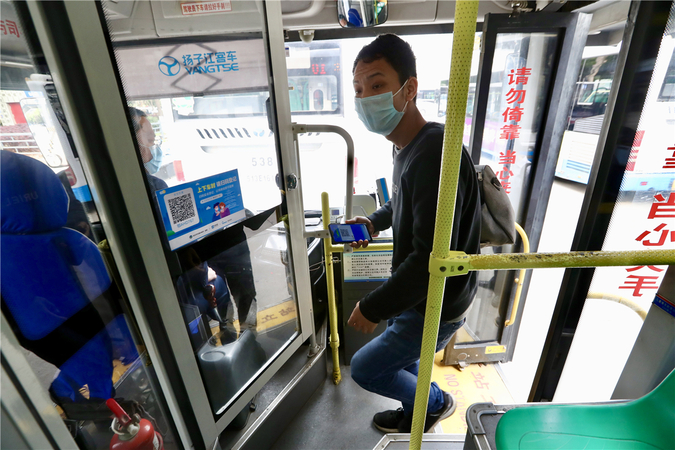 A man boards a bus on Wednesday at Wuchang Railway Station in Wuhan, capital of Hubei province－the city hardest hit by the COVID-19 outbreak in the nation. Transport services in Wuhan have begun gradually reopening to the public as the city has achieved significant results in the battle against the virus. ZHU XINGXIN/CHINA DAILY

Hubei province has begun gradually reopening all transport services in areas other than Wuhan since Wednesday to ensure smooth resumption of work and production.

Areas except for Wuhan, the provincial capital, have been reopening railway, waterway and long-distance bus services as well as highways in an orderly manner, said Wang Benju, deputy director of the province's transport department.

Wuhan, the hardest-hit city in China by the novel coronavirus outbreak, will resume commercial flights－excluding international flights and flights to and from Beijing－and cargo flights on April 8.Local authorities have also applied to the Civil Aviation Administration of China to reopen air services in other areas as soon as possible, Wang added.

Seventeen stations along Wuhan's rail network will allow arrivals on March 28 and will begin outbound operations on April 8－also the date the city is scheduled to reopen all inbound and outbound bus services.

Wuhan also resumed some public bus services within the city on Wednesday and will start running six subway lines from Saturday.

Migrant workers who hold green health codes－meaning they are healthy and have had no contact with any infected or suspected coronavirus patients－and wish to leave the province to return to work, are encouraged to drive their own vehicles or take long-distance buses.

Hubei has imposed traffic restrictions since Jan 23 and suspended buses, subways, flights, railways and highway services in a bid to keep people at home and curb the spread of the virus.

Staff members from local departments of public security, transportation and epidemic prevention－as well as communities themselves－have formed joint teams and stationed themselves at every highway entry and exit to strictly prevent unauthorized travel.

Wang said all checkpoints and road barriers placed at junctions will be cleared by Friday, and travelers entering or leaving the province with green health codes are able to travel freely in and out of the province.

Since the outbreak of the epidemic along with the stringent traffic restriction measures, many migrant workers have been stranded at home for more than two months.

Qichun county, Huanggang city, for example, estimates it has about 216,000 people who need to leave the province to return to work. With the restrictions lifted on Wednesday, passengers were seen at a long-distance bus station in the county waiting in line to register their information and have temperatures checked before boarding.

The easing of traffic restrictions came as the province has seen great improvements in controlling the epidemic.

On March 13, all areas except Wuhan have been rated as low and medium risk, and the provincial government started to encourage returning people to work by using chartered bus services traveling directly to destinations.