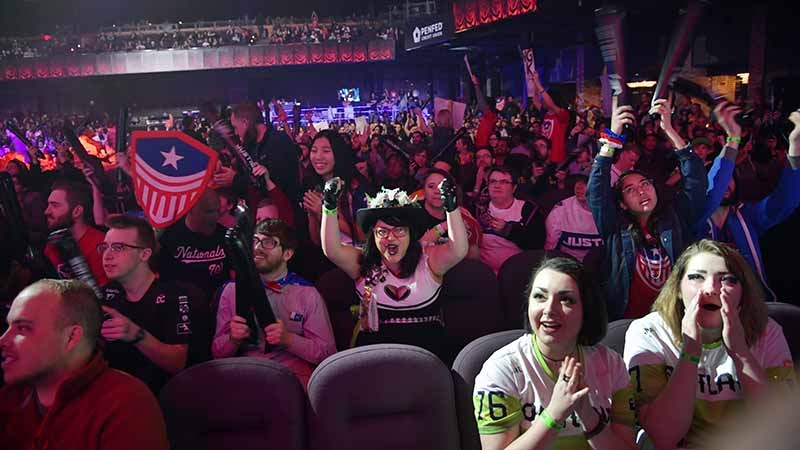 Overwatch League fans cheer for their favorite teams at The Anthem in Washington, D.C., on Feb. 22, 2020. They'll have to watch the upcoming matches online. PHOTO CREDIT: Washington Post photo by Marvin Joseph

Since its inception, the Overwatch League's goal has been to pioneer the execution of an esports schedule by staging competitions in cities around the world, hosted by locally rooted teams and staged in front of cheering fans. Every sold-out arena, every raving crowd, every person in line for a team's jersey adds tangible, monetary value to the fandoms that exist online.

But, in the face of a global pandemic, the league has been forced to return to its roots on the Internet, a dynamic that predated the league's founding, and forgoing this distinctive - and revenue generating - element. As it returns to action this weekend, the league and its teams are taking stock of this rapid recalibration required out of unwelcome necessity. Some of the big questions around the viability of the league's format will remain unresolved for now, with some teams regarding this as a lost season in that regard.

This third season was going to be the first year for the Overwatch League to truly test their theory that an esport can regularly host live matches like traditional sports, with weekend matches planned in six countries over a 27-week season. Franchise owners, who reportedly invested $20 million or more into their teams, would be able to better evaluate the investment in a model that required every team to host multiple weekend-long homestand events. The outbreak of covid-19 changed everything. First, the opening weekend in Shanghai was postponed, then the league canceled all matches in China and South Korea until April. Finally, as the virus spread to Western Europe and North America, the league announced all weekend homestands through April will be canceled. There were just six homestand weekends in the United States - in packed arenas - before the season ground to a temporary halt.

Matches for the foreseeable future will be online only. In a statement, OWL wrote matches will return to live events for fans "as soon as it is safe and logistically possible."

The Overwatch League (OWL) didn't have a choice in the matter. For weeks, federal and state officials have been banning large events in order to curb the spread of the virus. The league had to decide between hosting matches online or postponing the rest of the season.

"There's really nothing they could have done," Florida Mayhem General Manager Albert Yeh said. "I wish we had a whole season of homestands so we had more data to, kind of, decide whether the homestand model is viable."

Before the season's launch, front offices around the league spent months planning for travel and live events in their hometowns. Now, "all of that is kind of out the window," Boston Uprising's President of Gaming Chris Loranger told The Post. Loranger said he's sure the Uprising, is not the only franchise with some headaches and disappointment.

McCarty Maxwell, the senior head of events for the Atlanta Reign, told The Post their team's business relies on hosting live events. Ticket sales are one of the few revenue streams from which the league does not withhold a sizable percentage, Maxwell said, canceling a homestand "sets us back a ton."

"We're sort of just burning through everything right now with no help," Maxwell told The Post, noting the pandemic is not something the league could have predicted.

Teams are spending more than they make on these events, Maxwell said, but it's with the hope that they'll make up the losses down the road. The homestands are the best opportunities to build the fan base to do so, he added.

"We kind of have to start over next season and do this all over again, which puts us about a year behind in projections," Maxwell said. "It's not about this year, it's about three years from now."

LA Valiant General Manager Mike Schwartz told The Post that heading into this year, everyone around the league saw this third season as a "make or break" moment. But, Schwartz said, nobody will fault the league for pushing broadcasts online to protect players and fans.

"If they're still committing to this model next year, I think there's a lot of learnings, between scheduling and travel," Schwartz said, adding there are reasons to be optimistic. "Hopefully, when you weather a global pandemic, going through this, season four should have a lot more structure."

Overwatch League will hit the reset button for the next portion of its third season on Saturday with 16 online matches in two days. Teams have no been divided into three regional conferences, and all three will compete. In North America, matches will begin every two hours. All the games will be streaming live on YouTube, the exclusive streaming partner for the OWL and other Activision Blizzard esports properties.

The online matches were supposed to start last weekend but the OWL had to scrap those plans after California Gov. Gavin Newsom implemented a "stay at home" order. The league quickly pivoted to a Sunday double-header where teams got to try out a new hero, Echo, in no-stakes exhibition matches.

Seoul Dynasty's Chief Operating Officer Arnold Hur told The Post earlier this month that, throughout all the changes in the Pacific division, the league has been "extremely communicative" about the decisions they're preparing to make. League officials regularly checked in to ask for feedback from teams.

"There's been a lot of criticism about the league and how they can seem really corporate-y, but, in this case, I do feel like they're moving really quickly," Hur said. "They're ahead of the curve."

The league is focused on the long-game, said Toronto Defiant's CEO Chris Overholt, who is also the CEO and President of OverActive Media, which owns the Defiant. League officials have "worked their tails off" to get the OWL where it is in just three seasons, Overholt said.

Canceling homestand matches may be disappointing, but teams will find the "silver lining," according to Overholt. The franchises have an opportunity to provide competitions for fans, by moving online, while "we're all, kind of, cooped up at home."