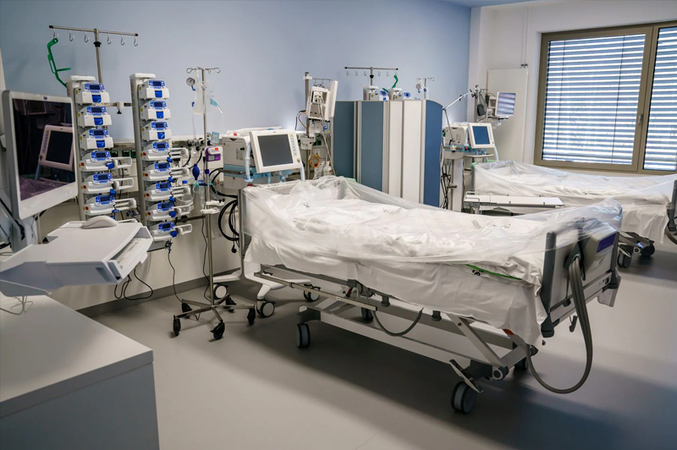 A New York hospital is putting two patients at a time on ventilators intended for one, a stopgap move that reflects the desperate shortage of lifesaving breathing devices during the coronavirus pandemic.

The procedure has never been studied in humans. It was briefly pressed into service in the emergency room of a Nevada hospital that ran short on ventilators during the 2017 mass shooting in Las Vegas and, according to an image on Twitter, in the past few days in Italy.

An emergency doctor at SUNY Downstate Health Sciences University in Brooklyn kept four sheep alive for 12 hours in a 2008 experiment, using a jury-rigged ventilator. But another researcher who tested the idea on simulated mechanical lungs in a laboratory said it is too difficult to be practical, even under current circumstances.

"There's no physician, including myself, who believes this is ideal. This is a doomsday idea," said Lorenzo Paladino, an associate professor of emergency medicine at SUNY Downstate who performed the 2008 experiment. Rather than choose who can have a ventilator and who will be left to die, "I can do this and maybe keep everyone alive," he said.

Doctors at Columbia University Irving Medical Center have two patients at a time on some ventilators. Jeremy Beitler, a pulmonary disease specialist at the hospital that is part of the NewYork-Presbyterian health system, declined to say how many patients are being treated this way.

He said the hospital began the effort in recent days, with the approval of several regulatory agencies and is "scaling up" in response to the shortage.

The ultimate number of additional patients who can be treated this way is unknown, Beitler said. But he cautioned that "this is not a panacea. It's not going to double the number of ventilators."

The devices have meant the difference between life and death for many people who have contracted covid-19, the disease caused by the coronavirus that kills by clogging and inflaming the tiny air sacs in the lungs, choking off life-sustaining oxygen.

Ventilators force oxygen into those sacs and through their linings so the bloodstream can carry it to vital organs, and they remove carbon dioxide in the same exchange.

Because equal pressure is being forced into the lungs of two people, the New York doctors must first match them for relatively equal lung size and severity of disease, Beitler said. With the scale of the pandemic, that is not difficult, even within a single hospital, Beitler said.

Sedating the patient and inserting a plastic tube deep into the airway requires caregivers to work close to the patient's mouth, exposing them to greater danger from fine aerosolized droplets that emerge and can hang in the air longer than the larger droplets from sneezes and coughs.

Once on a ventilator, people with severe covid-19 can remain intubated for 15 or 20 days, using the badly needed equipment and critical hospital beds. And quite a few still die; in initial studies out of Washington state and Wuhan, China, intubated patients died at fairly high rates, although many had underlying health conditions.

New York Gov. Andrew Cuomo, a Democrat, has begged the federal government to send tens of thousands of ventilators to New York City hospitals that are quickly becoming overwhelmed without them.

"You pick the 26,000 people who are going to die," he said angrily Tuesday after receiving ventilators for hospitals he said need 30,000. "You want a pat on the back for sending 400 ventilators? What are we going to do with 400 ventilators?" Later in the week, the city received a shipment of about 4,000 of the devices.

Trump has disputed the estimates from Cuomo and New York Mayor Bill de Blasio. Speaking Thursday night on Fox News, he said: "I don't believe you need 40,000 or 30,000 ventilators. You go into major hospitals sometimes, and they'll have two ventilators. And now all of a sudden they're saying, 'Can we order 30,000 ventilators?' "

Unlike the disastrous shortage of protective equipment for front-line health-care workers, the scarcity of ventilators is not easily attributed to the government's failure to stock enough for a pandemic, said Julie Swann, a professor of industrial and systems engineering at North Carolina State University who studies the resilience of supply chains in such events.

At prices of as much as $50,000 for top-of-the-line models, ventilators are too expensive for the government to buy enough for a widespread respiratory outbreak such as this one, she said. It's also impractical to move them from cities that are not overloaded with severe coronavirus cases to ones that are, because patients may stay on them for weeks, she said. That approach was reportedly used in China, one expert said.

"We're dealing with an event that may occur once every 100 years. It's extremely difficult to be prepared in advance for such events," Swann said.

Medtronic, which manufactures high-end ventilators for the most severely ill patients, produced about 100 a week at its Ireland plant before the pandemic and is up to making 225, said Rob Clark, the company's chief communications officer. It hopes to reach 500 per week within several weeks, Clark said, by operating around the clock.

But the company's ventilators contain 1,700 parts from 14 suppliers around the world and require 1 million lines of computer code, limiting how quickly the process can be expedited, he said.

The company, and others, are in talks with the Federal Emergency Management Agency to sell additional ventilators to the government and have FEMA take over distribution, he said.

Other ideas under discussion among planners and experts include repurposing some of the estimated 70,000 anesthesia ventilators that deliver gases used for surgeries, creating ventilators with 3-D printers, asking carmakers for help building ventilators and even borrowing veterinary ventilators.

The approach requires "four different people with pretty similar lung mechanics, which is pretty difficult to do," he said. "To be honest, I don't think this is a practical solution. The solution is to get more ventilators."

The Italian doctor who tweeted that he had treated two patients on one ventilator used large masks to supply oxygen, according to his photo. His patients were not intubated, which lessens the difficulty of the process.

But Paladino, the SUNY Downstate researcher, said it may be possible with enough compression to put four or even more people on a single ventilator, though they would have to be very evenly matched and would require intensive monitoring by health-care workers. One key to expanding ventilators, he said, is being able to install the filters that remove viruses from patient exhalations.

Paladino said he was called to a Wednesday meeting at the White House to discuss ways to do it.

"The biggest problem is that most people have never done this, and they don't know how to," he said. "And in a disaster like this, they're doing it for the first time."

Tags:
ventilator coronavirus pandemic The US