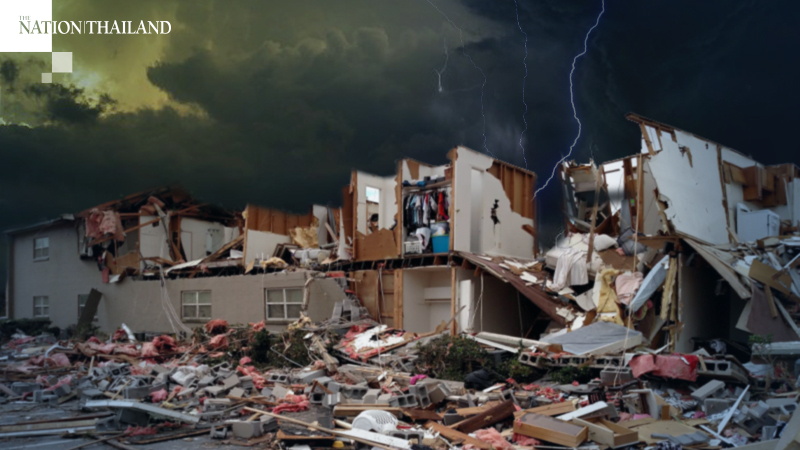 On a day in which the epicenter of a severe thunderstorm outbreak was predicted to be in central Illinois, a violent tornado ripped through Jonesboro, Arkansas, causing extensive damage.

The large twister tore through the south side of the city of over 75,000 people just after 5 p.m. local time Saturday.

The National Weather Service received reports of flipped cars and "severe" damage to buildings in downtown Jonesboro and "extensive" damage at a shopping mall and other buildings. Several hangars and planes were reportedly damaged at Jonesboro Municipal Airport.

The National Weather Service had issued a tornado warning at 4:47 p.m. for Jonesboro, offering 13 to 14 minutes of lead time. A tornado watch had been posted for much of eastern Arkansas just after 2 p.m.

Additional tornadoes were reported in northeast Arkansas near Amagon and Caldwell.

Video of the Jonesboro twister featured its deafening roar and displayed power flashes and large amounts of debris lofted into the air. Radar suggested the debris was lofted more than 4 miles high, or more than 20,000 feet.

The height to which the debris was flung and enormity of the twister in video footage suggest the tornado was at least an EF-3 on the 0 to 5 scale for tornado intensity.

Social media imagery of the tornado's aftermath showed major damage in the area, including blown-out windows and flattened structures:

The tornado was captured live as it raced through northeast Arkansas by The Weather Channel and the KAIT television affiliate out of Jonesboro.

While the Jonesboro tornado appeared to be Saturday's most destructive, the Weather Service had issued tornado watches and warnings across several Midwestern states.

In addition to several reports of tornadoes in eastern Arkansas, the Weather Service also received multiple tornado confirmations in Iowa.

In all, the Weather Service had logged over 100 reports of severe weather, taking into account tornadoes, hail and damaging winds. And more severe weather was expected through Saturday night.