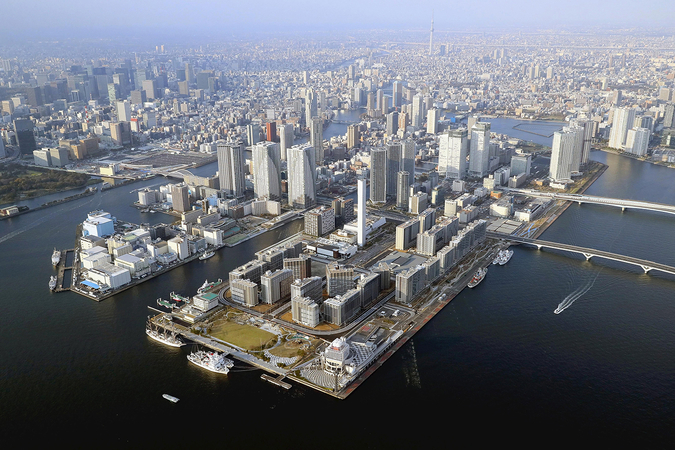 The Olympic Village in Tokyo is seen on March 23, 2020. MUST CREDIT: Japan News-Yomiuri

Tokyo Gov. Yuriko Koike said on Friday that the government is considering using the Olympic Village in Tokyo as a place for patients with milder cases of illness caused by the coronavirus to stay.

During the Olympics and Paralympics, about 18,000 people including athletes are expected to stay in the roughly 3,800 units across 21 buildings in the village in the Harumi district of Chuo Ward. After the Games, some units will be sold as apartments.

Tokyo started to consider using the village because the number of infected people with unknown transmission routes is increasing in the capital.

With a population of over 13 million in the capital, in the worst case scenario it is estimated there would be about 45,400 new outpatients per day, according to a formula compiled by the Health, Labor and Welfare Ministry. In this scenario, no virus countermeasures would have been taken or the measures would have been ineffective. In such a situation, the number of hospitalized patients per day is estimated to be about 20,500 and that of seriously ill patients about 700.

In principle, it is necessary to hospitalize infected people. The metropolitan government has so far secured 140 beds at 12 hospitals designated as medical institutions for infectious diseases. In preparation for an explosive rise in cases, the Tokyo government will seek the cooperation of medical institutions to secure about 700 beds for the seriously ill and about 3,300 for the moderately ill. However, an official of the metropolitan government said attaining this goal will be "quite tough."

As a result, the government is considering allowing patients with mild symptoms to recuperate at home or their place of lodging, in addition to using the Olympic Village.