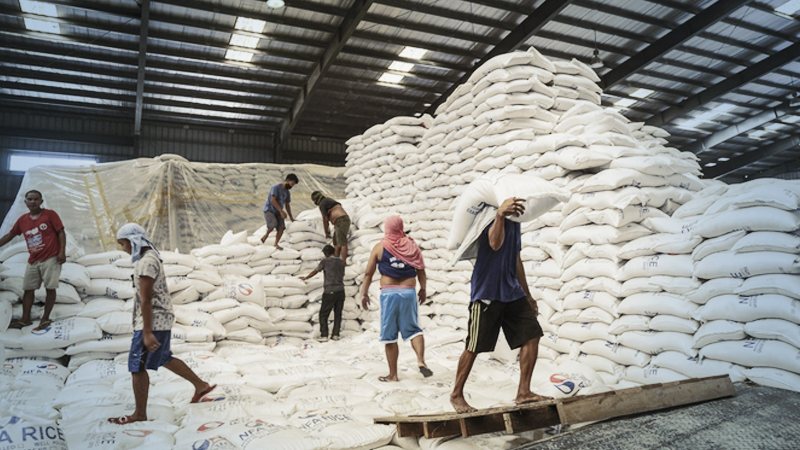 Workers carry sacks of rice inside a National Food Authority warehouse in Manila, Philippines on March 26, 2020. MUST CREDIT: Bloomberg photo by Veejay Villafranca.

Panic buying at supermarkets and hoarding have raised fears over food supplies, and governments for their part are acutely aware that keeping everyone fed at affordable prices is crucial for political stability.

Russia, Kazakhstan and Ukraine have already announced plans to limit wheat exports, and in Asia worries over making sure there's enough food for everyone have now spread to rice, the main staple for billions of people in the region. China and India are the biggest global producers and consumers.

Vietnam, the world's third-largest shipper, has temporarily suspended new export sales to protect domestic supplies amid drought in the Mekong Delta. The prime minister has asked the trade ministry to submit an export plan before April 5, as shipments need to be controlled in order to ensure national food security, according to a posting on the government website. Myanmar has also said it may cut exports to avoid domestic shortages.

"The countries are just operating out of an abundance of caution," said Bangkok-based David Dawe from the United Nations' Food and Agriculture Organization and a writer on rice economics. "They just want to make sure that they have enough supplies for themselves," he said in an interview.

Importers are also not taking any chances. The Philippines, Vietnam's biggest market, is allocating more than $600 million for food sufficiency efforts and plans to buy 300,000 tons of rice, possibly through state deals with Southeast Asian suppliers, or through sources such as India and Pakistan.

China, with 1.4 billion people to feed and where rice has been a cornerstone of food policy for centuries, increased purchase prices for some crops and pledged to buy a record amount from this year's harvest to ensure supplies. It doesn't import or export much relative to its consumption, but just wants to be sure of preserving rice reserves after the coronavirus upended the economy.

The reality is that there is no actual shortage. Warehouses in India, the world's largest exporter, are brimming over with rice and wheat on record harvests. Global production of milled rice is estimated at around a record 500 million tons in 2019-20 and global stockpiles are at an all-time high of more than 180 million tons, according to the U.S. Department of Agriculture.

Not only does India have large reserves, but Thailand, the second-biggest shipper, recently said it had enough rice to meet its export target, even after suffering the worst drought in decades. Indonesia, the world's fourth most populous country, says it has sufficient supplies for now.

Prices of Thai white rice 5% broken, an Asian export benchmark, have surged more than 25% this year to $564 a ton on Wednesday, the highest level since 2013, because of drought in the country and increased buying from importers.

"In the short term, rice prices will go up," said Dawe from the FAO. "But they won't go up a lot. I don't think we're going to see a price spike like we saw in 2008." That year benchmark prices climbed to more than $1,000 a ton as nations curbed exports amid a global food shortage.