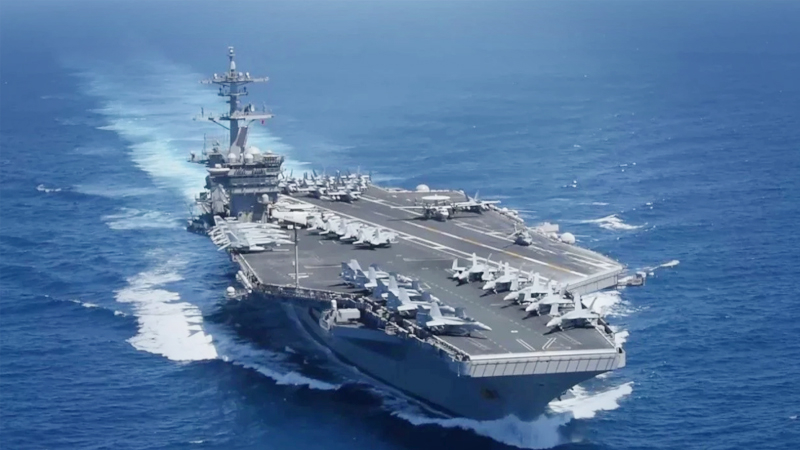 The Navy plans to remove about 2,700 sailors from an aircraft carrier in Guam afflicted by the novel coronavirus within days, senior Navy officials said Wednesday, as government officials on the island worked to secure hotel rooms for many of them.

The move comes after a letter written by the captain of the USS Theodore Roosevelt, circulated in the news media, drew attention to the service's response to the situation.

The commanding officer, Capt. Brett Crozier, wrote that "decisive action is required," "sailors do not need to die" and that if the Navy didn't act, it was "failing to properly to take care of our most trusted asset - our sailors."

Acting Navy secretary Thomas Modly told reporters that nearly 1,000 sailors have left the ship so far for testing and quarantining.

As of Wednesday, 93 sailors from the carrier had tested positive for the virus and 593 tested negative, Modly said. Seventy-six percent of the crew of more than 4,800 still needed to be tested, he said.

Asked about Crozier's letter, Modly said senior Navy officials "understand this is a very unusual circumstance." But he disagreed with any assessment that the Navy might not take care of its sailors.

"It's disappointing to have him say that," Modly said. "At the same time, I know that's not the truth. We have been working very, very hard within the ship to ensure the command structure that's exactly what we're doing."

Modly and the Navy's chief of naval operations, Adm. Michael Gilday, acknowledged that there was a communications breakdown between Crozier, who reports directly to admirals in the Pacific, and senior Navy officials at the Pentagon.

The outbreak on the Roosevelt is the Defense Department's single largest, crippling one of the Pentagon's most significant strategic weapons. The "Big Stick," as the ship is affectionately nicknamed, effectively is a 20-story floating city that is home to about 4,800 people and scores of fighter jets and other weapons. Two other aircraft carriers are still at sea.

Family members of deployed sailors have also voiced frustrations about the Navy's handling of the outbreak.

One person close to a sailor aboard the ship, speaking on the condition of anonymity because of concerns it would lead to retaliation, said the crew has been asking "higher ups" in the Navy for help disembarking for more than a week.

"In turn, they received half-baked plans that never materialized, and were in essence told to stick out as the virus spread rapidly aboard," the person said. "Since the media found out, the Navy leaders have seemingly been more responsive, but that remains to be seen."

Crozier asked the Navy to allow him to clear 90 percent of the ship to allow for deep cleaning and assurances that his entire crew was free of the virus, but Modly said he did not think it is possible to go that far. More sailors will be needed to man weapons, oversee nuclear reactors and watch for fires, among other tasks.

Gilday did not rule out that more service members eventually could be removed from the ship as it is cleaned and sailors are tested. About 1,000 sailors at a time must remain on the ship, he said.

The admiral said it is unclear how the captain's letter, first published by the San Francisco Chronicle, reached the news media. Writing the letter and submitting to higher-ranking commanders is acceptable, Gilday said, but leaking it "would be something that would violate the principles of good order and discipline."

"How it got out into the media I don't know," Gilday said. "I don't think anyone would ever know."

The ship deployed from San Diego in January along with other vessels in its strike group. As the coronavirus spread globally, the carrier visited Danang, Vietnam, on March 5 while the United States and Vietnam celebrated 25 years of normalized relations.

Gilday said the stop in Vietnam was a "risk-informed decision" because the country had about 15 or 16 reported cases at the time. The virus began emerging in Hanoi while the Theodore Roosevelt was docked there and on the ship about two weeks later while it was at sea. The first few patients were flown off the ship for treatment.