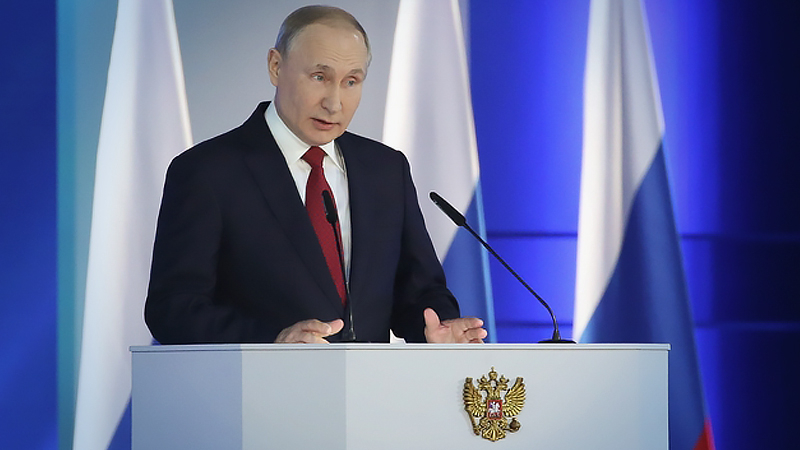 MOSCOW -- When Russia announced it was sending the world's biggest cargo plane, an Antonov-124, to the United States loaded with medical aid, President Donald Trump called it "very nice."

But others wonder if the real beneficiary is the Kremlin, leveraging a chance for some pandemic propaganda.

The Russian military flight took off Wednesday, according to Russia's Defense Ministry, but gave no details on the plane's U.S. destination or what kind of equipment it was carrying. The Trump administration also has not elaborated on the aid from Russia - or how much else could be coming from other countries.

"China sent us some stuff, which was terrific. Russia sent us a very, very large planeload of things, medical equipment, which was very nice," Trump told reporters Monday, apparently mistaken that the Russian plane had already arrived.

South Korean President Moon Jae-in said last week Trump had asked him for testing kits and medical equipment and South Korea -- one of the countries hardest hit by the virus -- was doing what it could.

"Other countries sent us things that I was very surprised at, very happily surprised," Trump said Monday, but did not cite specific shipments.

A different type of surprise was registered from some critical of Moscow's motives.

Former commanding general of the U.S. Army in Europe, Ben Hodges, tweeted that a shot published by Russia's Ministry of Foreign Affairs of thousands of cardboard boxes stacked in a plane hold was a "hoax" because "no professional Loadmaster in the world . . . in any air force . . . would load a plane like this."

The idea that Russia -- under U.S. sanctions for its interference in the 2016 presidential election and its annexation of Crimea from Ukraine in 2014 -- was sending medical aid in a giant military aircraft to the most powerful nation on earth seemed astounding to some longtime Kremlin watchers.

Russia analyst at the Carnegie Endowment for International Peace, Andrew Weiss, tweeted: "This is nuts," calling it a Kremlin propaganda ploy. Nina Jankowicz, expert on disinformation at the Wilson Center, said it was "mind boggling."

Russia's Defense Ministry said the plane refueled at Shannon in Ireland before continuing across the Atlantic. The aid was offered by Russian President Vladimir Putin when he spoke by phone to Trump on Monday.

In Russia, however, the aid shipment was framed as part of Russia's wider help for countries struggling with covid-19. With Moscow on lockdown, Russia's reported cases of coronavirus rose by 440 in a day Wednesday, reaching 2,777, slower than the previous day, when the rise was 501.

Publicity around the aid would also boost Putin, whose messaging on the coronavirus has been weak and contradictory. Other analysts wondered if a longer-range objective was in play, such as gaining leverage to ease U.S. sanctions in the future.

Trump's admiration for Putin has sparked criticism and speculation ever since his election, but special counsel Robert Mueller's report last year did not find evidence that Trump colluded with Russia over its election interference. Trump said the inquiry was a witch hunt and that the report exonerated him.

It is not Moscow's first shipment of medical aid to a NATO country this month. It sent 15 planeloads of medical equipment and military virologists and epidemiologists to Italy, in trucks emblazoned with "From Russia With Love."

"To put it mildly, it's a propaganda coup for Putin," said Andrew Foxall director of research at the Henry Jackson Society in London. "Putin has long argued that democracy is not the sunny uplands that the West professes it to be and in the current crisis the world's democracies don't appear to be any more effective than its autocracies in stemming the spread of [the] corona[virus.]

Foxall also said Putin wants to make a specific point about the United States: Making the case that "in some senses, Russia is now superior to the U.S."

"And the argument for that is if Russia weren't superior, why would it be sending it to the U.S. and why would the U.S. be accepting it?" Foxall said.

Russian officials have said Putin's only motive is to lend a hand at a difficult time for all. The Russian president is working remotely, "as much as possible," his spokesman Dmitry Peskov said Wednesday, after Putin last week shook hands with a doctor who Tuesday came down with covid-19.

Dmitry Trenin, director of the Carnegie Moscow Center, said Russia took advantage of a moment when the European Union had failed to help its hardest hit members.

"In international relations there is no good will without some calculus," said Trenin. "There is a propaganda element, certainly. While the E.U. dragged its feet and scratched its head, Russians and Chinese were practicing solidarity, not just preaching it."

"With the United States, Moscow's calculus is based on the expectation that covid-19, like any other major adverse development in world affairs, has the potential to radically change the global agenda," he said. "On 9/11, you would recall, Putin called Bush to offer support and help. The idea then and now is that a common cause would help make a clean slate and put the more contentious issues to one side, to be dealt with later, and in an improved atmosphere."

Mark Galeoti, director of London-based analytical firm Mayak Intelligence, said the Russian aid delivered Putin some useful optics for his domestic audience after he fumbled his messaging on covid-19, but it would not damage the United States.

"I think we have to move beyond the usual sort of paranoias at the moment. Of course the Russians are motivated by the desire to look like good citizens, but mainly I think for domestic consumption.

"Two weeks ago [Putin] was saying it's not a pandemic, the situation is under control and so forth. And now they're in a massive sort of clampdown," said Galeoti. "So obviously there's a lot of disquiet and it's nice to be able to say, 'Don't worry, look the Americans are in such a bad state that we're giving them help.' It's an attempt to say, 'No, look, we aren't behind the curve.'"