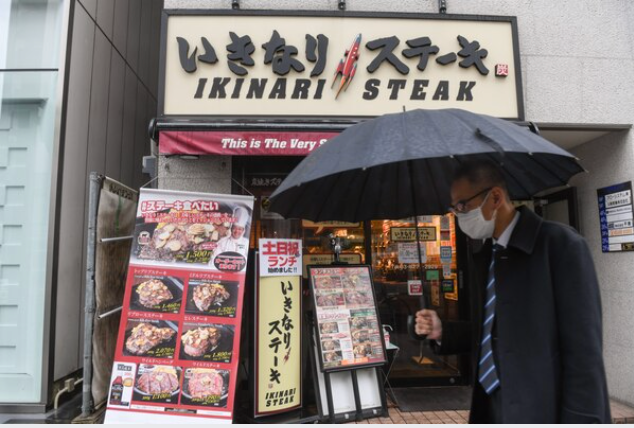 A pedestrian wearing a face mask and using an umbrella walks past an Ikinari Steak store in Tokyo on April 1, 2020. MUST CREDIT: Bloomberg photo by Noriko Hayashi.

In a country where people have long covered their faces to protect against allergies and avoid spreading disease, masks were the first thing to disappear from Japanese store shelves when the coronavirus started to hit.

In the latest attempt to assuage concerns over the shortage, Prime Minister Shinzo Abe announced plans on Wednesday to distribute two reusable cloth masks per household, to about 50 million addresses in the country.

But the plan backfired, with "Abenomask," meaning "Abe's Mask" -- a play on Abe's economic policy "Abenomics" -- becoming the number-one trending topic on Japanese Twitter. Memes mocked the two-mask move as insufficient, or asked the whereabouts of the cash handouts other governments across the world are planning.

The most widely distributed meme showed the family from "Sazae-san," a much-loved animated show starring a family of seven (and their cat), depicting the members sharing their household's two masks between them.

Another hailed the masks in a mock advertisement for a "Different Dimension Abenomask," riffing on the language used by Abe-appointed Bank of Japan Governor Haruhiko Kuroda in his monetary policy. The masks would "shut out the cries of the people," it said.

Others still pointed to World Health Organization guidelines that said cloth masks "are not recommended under any circumstance" in fighting the coronavirus.

Amid the pandemic, opinion has been divided on the efficacy of masks in preventing contagion. Officials in many countries in Asia, including Japan, have long recommended using masks but until recently, the U.S. did not, with the Surgeon General even urging people to stop buying masks in an all-capitals tweet on Feb. 29. But U.S. authorities have started to change that position, with President Donald Trump also warming to the idea, going so far as to suggest that using scarves might be better than wearing masks.

Traders punted on the plan though, buying up disinfectant-related stocks on speculation their products will be used on the reusable masks.

Abe, along with many members of his cabinet, has begun to wear face masks in recent days amid criticism politicians were not following the instructions they themselves were giving.

"The cloth mask I'm wearing myself is not a disposable one," Abe said Wednesday, announcing the plan. "By washing them with soap they can be re-used, and can be extremely effective given the sudden demand for masks."

But even some of his supporters weren't defending him, with best-selling novelist and noted Abe follower Naoki Hyakuta mocking the plan.

"Is this meant to be an April Fool's joke?" Hyakuta asked in one tweet. "Surely there are other things they could be doing -- declaring a state of emergency, reducing sales tax to zero, handing out money or closing pachinko parlors."