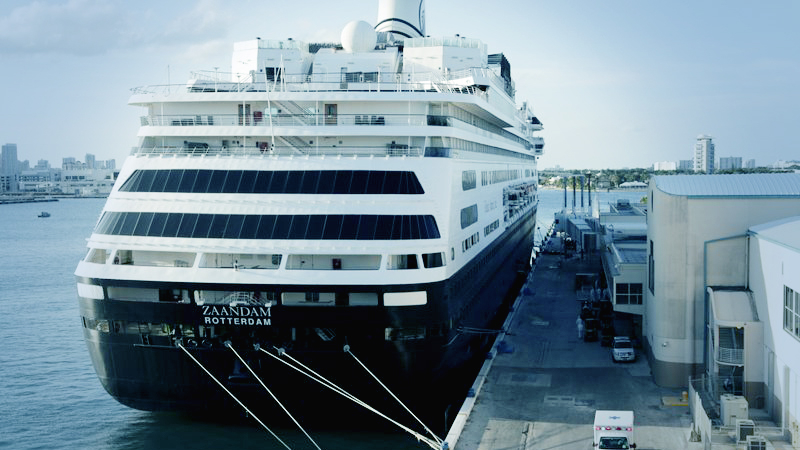 After spending more than two weeks searching for a port that would allow its passengers - some of whom are sick with the novel coronavirus - to disembark, Holland America Line's Zaandam cruise ship pulled up late Thursday afternoon in Port Everglades.

It was accompanied by Rotterdam, a sister ship that took on hundreds of passengers last weekend off Panama. Between the two ships, 250 guests and crew have reported flu-like symptoms since March 22. Four people died on Zaandam, including two who tested positive for coronavirus; nine people total have confirmed cases, a Carnival executive said this week.

Thursday's arrival followed days of negotiations, reluctance from Florida's governor and intervention by President Donald Trump - as well as intense pressure from those with loved ones or constituents on board and South Florida residents who wanted the vessels to find safe harbor in someone else's backyard.

"These travelers could have been any one of us or our families, unexpectedly caught in the middle of this unprecedented closure of global borders that happened in a matter of days and without warning," Orlando Ashford, president of Holland America Line, said in a statement. "The COVID-19 situation is one of the most urgent tests of our shared humanity, and we must do everything we can to ensure we continue to act in ways consistent with our common human dignity."

According to a plan that parent company Carnival Corp. worked out with a group of federal, state and local authorities, most passengers are expected to be off the ship by late Friday night. Priority to disembark on Thursday was going to 14 people in need of immediate care at local hospitals; the company paid for private ambulances to take them to the facilities in Broward and Miami-Dade counties.

Another 26 passengers were still showing symptoms, according to the repatriation plan, and will stay on the ship in isolation until they recover enough to travel. More than 1,100 crew members will also stay on the ship, including 49 who are ill; one sick crew member is being transported to a hospital.

The other 1,211 guests were expected to be deemed fit to travel after health screenings that include a questionnaire about recent symptoms and a temperature check. They will all be told to wear face masks at all times until they arrive home and to go into 14 days of self-isolation.

Once cleared to leave, Florida residents within a certain distance from the port were scheduled to be driven home in vehicles that the company contracted; those who live farther will take charter flights.

Additional charters are scheduled to depart Friday to Toronto, Atlanta, San Francisco and Paris followed by Frankfurt; the final flight is set for early Saturday morning to London. Buses will take passengers who are flying to Fort Lauderdale-Hollywood International Airport, where they will be brought directly to the tarmac.

"It's all going to be done in ways that are not going to expose the people of Florida to any of the illnesses that may be on there," Florida Gov. Ron DeSantis told Fox News Thursday. "Obviously you've got to be safe when you're doing this stuff."

He had previously told the network that he didn't want people from the ships "dumped into South Florida." But Thursday, he described the plan as "the humanitarian thing to do."

Several other ports would not let Zaandam offload passengers, even very sick ones, as it made its way toward Fort Lauderdale. The ship left Buenos Aires for a South America sailing on March 7, the day before the U.S. State Department and Centers for Disease Control and Prevention publicly warned those with underlying health conditions to avoid cruise travel.

Less than a week later, Holland America and most of the rest of the cruise industry suspended global operations. The cruise line tried to end the voyage and let passengers off the ship in Chile on March 16, but the government denied the request.

Passengers had been confined to their rooms since March 22, when 42 people reported flu-like symptoms.

Throughout the ordeal, Washington, District of Columbia, resident Victoria Anderson has been advocating for her parents, Andrea and Rob Anderson of Maineville, Ohio, to be brought home safely and to raise awareness about their plight.

Thursday, the 39-year-old nuclear engineer and part-time synchronized swimming coach watched online as the ships pulled into Port Everglades. She said she also got to talk to her parents without satellite Internet lapses for the first time in more than a month.

"They are so happy to be tethered to land, and I'm very relieved to see their physical ship attached to the dock in Port Everglades," Anderson said in an email.

Her mom, a 63-year-old fiber artist, and dad, a retired data analyst, said they expected to go through a health check Thursday night and fly out Friday. When they arrive home, they will find a stocked-up kitchen thanks to their son so they can stay home comfortably for two weeks.

Anderson said she had been floored by the support she got to help her parents get home, both from friends in Broward County and from strangers.

"I also think that my parents were being prayed for in every religion around the world, which was very comforting to all of us," she said.