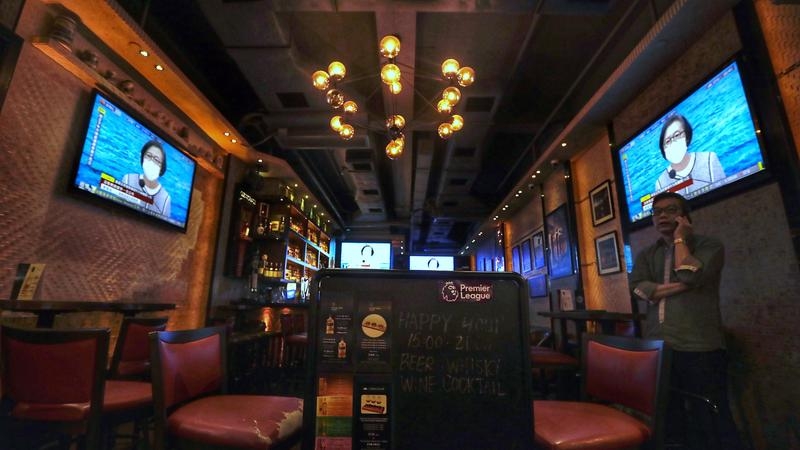 A staffer of a bar in Tsim Sha Tsui watches Hong Kong Secretary for Food and Health Sophia Chan announcing the closure of bars in the city for 14 days to enhance social distancing, Hong Kong, April 2, 2020. (EDMOND TANG/CHINA DAILY)

The Hong Kong government on Thursday ordered a two-week citywide closure of pubs and bars from 6 pm on Friday in a bid to further rein in the COVID-19 outbreak by bolstering social distancing.

Bars, pubs and other catering businesses that exclusively or mainly serve liquor are subject to the ban, according to an official gazette on Thursday night.

The decision came as the city recorded 37 new coronavirus infections on Thursday, taking the tally to 802. They included a locally diagnosed patient, whose infection chain is yet to be identified. But, it’s understood the patient, who worked as a part-timer at a bar in Causeway Bay, had visited several other bars during the incubation period.

The city has so far seen 69 coronavirus cases directly linked to bars, with 28 cases in the Lan Kwai Fong nightlife district in Central, said Secretary for Food and Health Sophia Chan Siu-chee. She said bars are considered highly risky places of contagion.

At least 14 tertiary and quaternary patients, who had not been to any bar, were later confirmed to be infected, including a 40-day-old baby, Chan said.

The government had earlier ordered the closures of cinemas, party rooms and gyms, and extended the list to cover mahjong parlors, karaoke lounges and nightclubs on Wednesday.