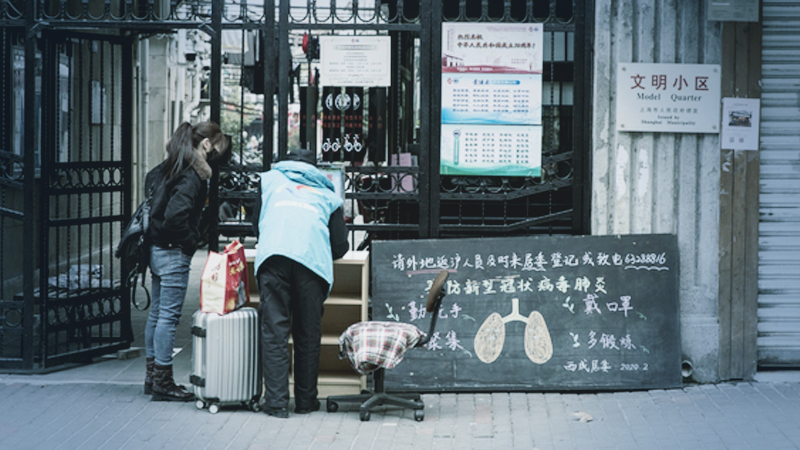 A local resident returning from travel registers with an official at the entry gate of a residential neighborhood in Shanghai on Feb. 5, 2020. MUST CREDIT: Bloomberg photo by Qilai Shen.

Before boarding a flight from northeast China back to Beijing in late February, Bunny Fan called her landlord's agent to make sure she could even get back into her apartment. No problem, she was told.

The next day the 27-year-old office worker found herself standing in the pouring rain outside of her building in China's capital, pleading with an elderly security guard to let her inside. But he said the rules had tightened since she got on the plane, and it took her nearly a month to jump through all the hoops of China's vast new virus bureaucracy to get back home.

"That old grandpa guarding the gate seemed to have more power and control over my life than a god," Fan said, recalling the episode. "How is it that me -- a person who listens to the government, and followed every order -- ended up not being able to go home for a month?"

Fan's ordeal shows how the government's efforts to get the economy moving again after weathering the worst of China's coronavirus outbreak is clashing with the reality on the ground. Migrant workers looking to finally travel back to their jobs in Beijing and other major cities must cope with constantly changing quarantine policies enforced by local officials whose decisions often seem arbitrary.

The move to end the lockdown in Wuhan -- the city at the epicenter of covid-19 -- next week could spur even more problems. The opening of surrounding Hubei province last month spurred rare clashes between police from two different forces as authorities in neighboring regions sought to prevent a second wave of infections.

China reported 31 additional confirmed coronavirus cases by the end of April 2, with 29 of them from abroad, according to a statement from the country's National Health Commission. It has more than 81,000 cases overall.

For migrants like Fan, it's difficult to do the right thing even when trying to follow all the rules. Like many workers who traveled back to see family over the Chinese New Year holidays in late January, Fan had returned to her hometown in Yanji, a northeastern Chinese city near the North Korean border.

On the morning of Feb. 29, she was ready to finally resume work at her company in the tourism sector after the government extended the holiday period to try and control the virus. Fan was assured by her apartment operator Ziroom, an online rental platform that help owners lease property, that she would have no trouble getting back into her co-rented apartment.

Under the impression that she would immediately go into a 14-day quarantine after getting back to Beijing, Fan didn't bring any spare clothes -- not even socks or underwear. Instead, she stashed her suitcase with disinfectant, rubber gloves, instant noodles, ham, kimchi and her mum's home-made dumplings.

Fan caught an early flight back to Beijing and arrived at her residential complex in the eastern district of Chaoyang around noon. The security guards at the front gate peeped through a small window and asked her to stand outside in the rain, which was turning from a drizzle into a heavy downpour.

After waiting for about 20 minutes, the elderly man at the gate informed her that policies had changed that morning. Now to get in, Fan would need her flat-mate to also spend 14 days quarantined with her -- something that was impossible because she couldn't get approval to work from home.

For the next four hours, Fan called around in desperation looking for a place to stay. She phoned the police and government hotlines, but they said the earliest they could get back to her would be in one to five days.

She rang up Ziroom, the online property manager, who said they could help her look for vacant apartments elsewhere, but the rooms wouldn't come with blankets or daily sanitary supplies like tooth brushes or toilet paper.Fan also didn't have any money to stay in a hotel. Earning about $1,200 a month, she spent a third of her income on rent. She had just handed over payment for her lease, spending the last bit of her savings. Fan's flight back to Beijing had cost 2,000 yuan ($281) and hotels required a 14-day upfront payment.Finally, she found a friend who agreed to go through quarantine with her and take her in. For Fan it was a godsend, even though she spent the next month wearing her friend's clothes, pajamas and even socks.

The next hoop she had to jump through was obtaining a bar code issued by the government to prove that she had undergone the 14-day period quarantine. On day one she signed in to a mini-program operated by the Beijing government on WeChat. For the next two weeks, she registered her whereabouts and temperature every day. Because she was paranoid that policies would change again, she even recorded videos of herself daily as evidence.

The QR codes generated by WeChat and Alipay have become a convenient tool for Chinese authorities to monitor the virus outbreak, while also triggering privacy concerns and challenges for people seeking to leave the country.

Fan's final challenge was an entry and exit permit to her residential complex. For that, she needed the health QR code generated on WeChat and documented proof that she was staying under quarantine with her friend from local officials. The authorities demanded that her friend's landlord scan his ID, provide proof that he owned the apartment and sign a letter to vouch for Fan.

"I felt like they were trying to make me prove that my dad was my dad, and my mum was my mum," said Fan, who was so frustrated during her quarantine that she began seeking therapy online. "I wanted to cry, but I was so frustrated it didn't even make sense to cry."

On the day before she decided to go back to her apartment, Fan rang the neighborhood committee hotline, telling them that she had obtained all the documents required. They were still unsure whether she could go back. Out of anger, her friend grabbed the phone and yelled at them, saying if they still refused to give Fan a permit she would soon run out of money and starve.

"She asked them are you going to be responsible if she starves to death, are you going to take care of her if she has no money to put food on the table," Fan said. "That's when they finally relented."

Fan recorded them giving her clearance to go home, just out of fear that the security guards on the ground again wouldn't let her in.

She was right to be afraid. When Fan got to the gates of her residential complex, the elderly man on security watch said he had no idea whether she could be let in. Fan had to playback the entire recording, walk him through the documents and throw a fit before he finally agreed to give her an entry and exit permit.

"I'm just so freaked out by the word 'policies' -- policies are the sky and earth, policies keep changing every day," Fan said. "When I look back at this whole experience, it seems that no one is at fault, but it does make me realize that when you're a little nobody you can be so helpless."