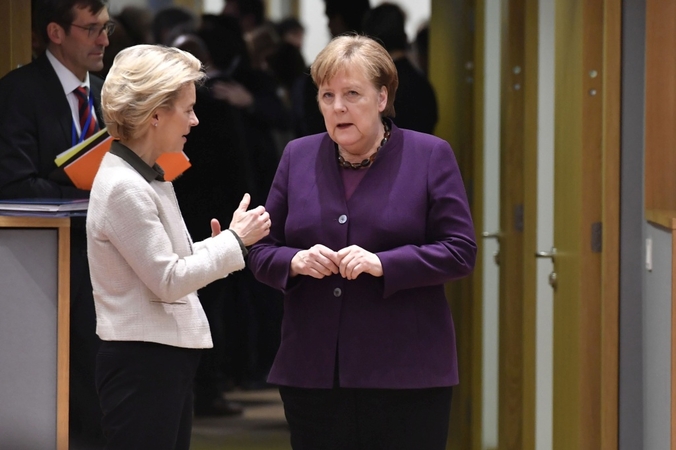 German Chancellor Angela Merkel returned to her office on Friday, ending a 12-day, self-enforced quarantine after at least three tests showed that she was free of the coronavirus.

The 65-year-old German leader -- who remains Germany's most popular politician after almost 15 years in power -- took to her apartment in Berlin on March 22 after being informed that a doctor who had administered a precautionary immunization two days earlier had later tested positive for the virus.

Speaking to the public Friday from the chancellery in Berlin for the first time since the quarantine, Merkel made a plea to citizens to stay home and avoid social contact through the Easter holiday.

Even though a slight slowing of the spread of the disease offers "some hope," she said it was far too early to set a target date for easing restrictions.

"I would be acting absolutely irresponsibly if I gave you a concrete day for lifting, or at least loosening measures, but then was unable to stand by this promise," Merkel said in a video podcast. "The number of infections won't allow it."

Merkel said her government is working "day and night" to both protect citizens' health and plan how public life could begin moving again, "step by step."

She took center stage in Germany's fight against the virus with a rare televised address to the nation on March 18, in which she called the crisis the country's gravest since World War II. Her quarantine threw her ability to manage the response to the outbreak into question.

The German leader's brush with the virus parallels that of Canadian Prime Minister Justin Trudeau, who has been working from self-isolation at home since March 12 after his wife contracted the illness.

Merkel isn't the only top European official directly impacted by the virus. European Central Bank President Christine Lagarde isolated herself temporarily last month following exposure to an infected person. And U.K. Prime Minister Boris Johnson has been quarantined for over a week after testing positive.