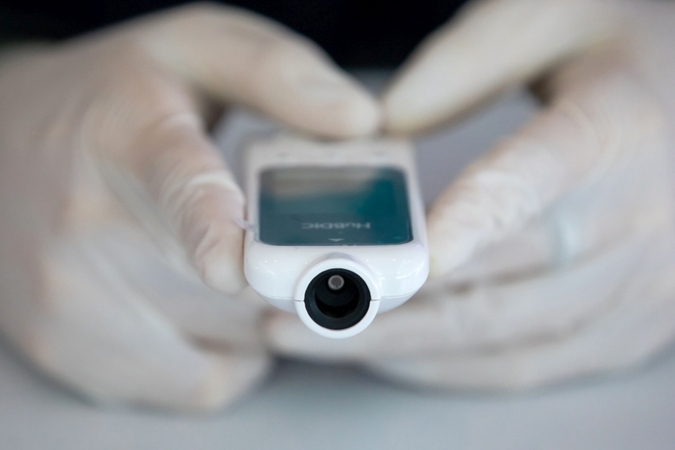 A South Korean soldier holds a thermometer at a temperature screening point at Incheon International Airport in Incheon, South Korea, on March 9, 2020. MUST CREDIT: Bloomberg photo by SeongJoon Cho.

Fitness-tracking gadgets are selling out, home exercise classes have never been more popular and industrial robot designers are pivoting to making sanitation bots.

The covid-19 pandemic has triggered a seismic wave of health awareness and anxiety, which is energizing a new category of virus-fighting tech.

The fear of infection has accelerated the adoption of apps and wearables as a means to feel better protected. "Having accurate and immediate feedback about our body temperature, blood pressure and other health signals helps to restore people's sense of control," said Andy Yap, a social psychologist at the INSEAD business school.

Users, insurers and health-care providers are all seeing the benefit of health gadgets, in a shift expected to persist long after the outbreak subsides. That's galvanizing the development of new devices by startups and gadget outfits in Asia, where the novel coronavirus first struck and consumers are known to be early adopters.

The Withings Thermo is a contactless thermometer that uses 16 sensors to take more than 4,000 measurements in 2 seconds -- which it then syncs to a mobile app. It costs $99.95, but nobody can buy one until mid-April because all inventory was depleted two weeks ago, according to the company. Use of the Thermo has been significantly higher than usual for this time of year, the company added.

Until the start of this year, CrucialTec Co. used to give away its thumb-sized thermometer dongle as a gift to clients, finding no market for the health gadget. That all changed when "orders came pouring in after the virus outbreak," said President Jay Yim, and the South Korean company's now ramping up production with the goal of making "more than 500,000 within the first half of this year."

Local governments in China, retailers in Japan and U.S. wholesalers are all putting in orders for the $65 Temon thermometer, and Yim expects one or two Chinese smartphone makers to come out with prototype devices with the technology built in this fall. Sister company CrucialTrak, which sells the module, has seen orders for its touch-less biometric ID solutions -- facial, vein and iris scanning -- rise fivefold after the initial outbreak, according to Senior Vice President Seung Y. Park. It plans to go public in 2022.

Youibot Robotics Technologies Co. took 18 days to design and build a human-height robot that can sanitize rooms using two ultraviolet lights as well as measure the body temperature of passersby. The Shenzhen-based startup, which partnered with Michelin on robot tire inspectors in 2017, is looking to sell more than 200 of these "anti-epidemic" robots in the first half of this year, said Cody Zhang, founder and chief executive officer, virtually doubling the company's entire sales output from last year.

"A robot that fights virus pandemics is something new, but we are prepared because it was our goal to bring robotic equipment to emerging sectors," said Zhang, who was born in 1992. The company already had the basic building blocks on hand and sourced ultraviolet tubes from Philips along with other off-the-shelf components like cameras and temperature sensors. Zhang expects the sanitizing robots to deliver close to a third of Youibot's 70 million yuan ($9 million) sales target this year.

Another small Chinese startup, the Hangzhou-based MegaHealth Information Technology Co., saw a fivefold increase in its sales the past two months compared to the last quarter of 2019 -- largely thanks to its medical ring that can monitor heart rate and blood oxygen levels. "We initially developed the product for patients who have breathing problems, but the coronavirus outbreak extended its use," said CEO Hu Jun, whose gadget is in use in around 100 Chinese hospitals now. It will be in the U.S. and Europe in the second half of the year, he added, and once production catches up with demand, MegaHealth will sell it direct to consumers as well.

Fitness app and gadget provider Chengdu Music Information Technology Co., trading under the name Codoon, has seen the number of its users exercising at home almost triple. Responding to user and government demand, the company's also added a thermometer function to its fitness watches. "We have a new app, an AI temperature-measuring system, following the government's encouragement," said founder and CEO Shen Bo. Codoon is investing more in software, Shen added, because he sees gadgets with personalized programming as the key to sustaining user interest.

Bhrugu Pange, managing director at global consultants AArete, expects that the surge in usage now -- as people grapple with the uncertainty around infection and treatment -- will lead to a domino effect producing lasting change. Users, insurers and health-care providers will all "start taking fitness-tracking devices and apps more seriously as a tool for preventive and proactive maintenance of patient health. This in turn will lead to more serious collaboration between device makers and healthcare institutions."

Beyond hardware, health experts and startups are looking into mobilizing health data to help consumers. John Torous, a researcher at the Harvard-associated Beth Israel Deaconess Medical Center is integrating Apple Watch and Google Fit device data into a common platform, allowing patients to consult with doctors online and share their measurable health indicators.

"After (and during) periods of high stress and anxiety like we are in now, often demand and need for mental health services expands. With telehealth we can meet this demand and ensure everyone has access to care," said Torous. He's among the strongest advocates of a widespread move toward remote medicine, hastened by the rapid spread of Covid-19.

Working toward a similar goal, Huami Corp., which makes Xiaomi's popular fitness-tracking bands, looked back on the sleep data it had from 115,000 users in Wuhan -- epicenter of the coronavirus outbreak -- and the neighboring Anhui province from July 2017 to Feb. 2020. The company saw a detectable deviation in reported sleeping heart rate, which peaked on Jan. 21, weeks earlier than in previous years. Similar spikes showed up in other Chinese cities including Beijing, Shanghai and Hangzhou as the virus started spreading to them. Huami is now developing an early-warning signal to flag these anomalies as they occur and accelerate the reaction to the next major epidemic.

Ultimately, the current wave of new consumer gadgets and the data they churn out have the potential to produce big technological breakthroughs.

"Historically, new tech emerged after major incidents such as the Spanish flu outbreak and the two World Wars," said Suh Yonggu, dean of the business school at Sookmyung Women's University. He expects the novel coronavirus to have long-lasting impact. "Even after the Covid-19 pandemic subsides, I believe offline health-care will be shifted to online training and home health-care, fueled by changes in people's value for family and house."