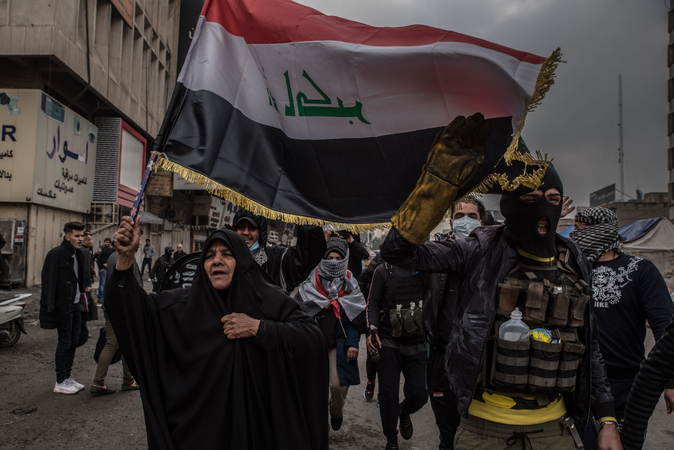 Iraqi protesters march toward Khilani Square in Baghdad in January. MUST CREDIT: photo for The Washingotn Post by Emilienne Malfatto.

Only weeks ago, thousands of Chileans were filling the streets of Santiago for regular Friday protests against cost-of-living pressures, uneven growth and rising inequality. The left-leaning demonstrators made demands that included the resignation of the president and the end of capitalism.

Then came the novel coronavirus. And just like that, large gatherings were banned, and the demonstrations died.

"The virus is just what the government needed," said Antonio Cueto, a volunteer rescue worker who provided medical assistance to protesters. "It's saved them for a bit."

Across the globe, the coronavirus outbreak is slamming the brakes on dreams of social change, halting a season of civil unrest from Hong Kong to Lebanon to Chile. Stay-at-home orders issued by authorities, often enforced by police officers or soldiers and backed up by detentions, along with activists' own calls to stand down in the name of public health, are zapping the momentum from pro-democracy movements, civil rights marches and protests for everything from women's rights to more drastic steps to fight climate change.

Yet instead of killing these movements outright, the pandemic is compelling them to evolve. Some are adopting creative tactics for protest in the era of social distancing.

In Hong Kong, eight months of political unrest over Beijing's tightening grip on the semiautonomous territory had begun to dwindle in size and ferocity in the face of a resolute government response when the outbreak hit. There, the coronavirus provided a new opportunity for the movement to prove its value beyond street protests and slogans.

Rather than continuing to plug mass demonstrations, anti-government activists have used the networks they built during months of organizing to import more than 100,000 medical masks and distribute them to people in need. They've taken to social media and message apps such as Telegram to post recommendations and reminders on avoiding the coronavirus.

Labor unions that popped up during the unrest started flexing their muscles. A medical workers' strike in February, for instance, became a major embarrassment for the government, eventually prompting Hong Kong leader Carrie Lam to shut a majority of her territory's borders with the mainland - a step she previously was unwilling to take.

"Of course the strike was about employee welfare, but it was also grounded in the idea that the Hong Kong government is still too beholden to Beijing," said Antony Dapiran, the author of "City on Fire," a book about the Hong Kong protests. "It was a really interesting case study of how last year's protest movement had tangible results."

Despite new social distancing rules, the Hong Kong protests continue, particularly on days considered significant to the pro-democracy movement. In the past week, demonstrators gathered at the Prince Edward subway station to commemorate a violent police crackdown there in August. To get them to disperse, police invoked a new law - a ban on gatherings of more than four people - and warned of fines and jail time.

Tens of thousands of women filled the streets of Buenos Aires in February to support a bid to legalize abortion in the homeland of Pope Francis. But Argentina has since instituted a national lockdown, and a government poised to introduce a landmark abortion rights bill instead turned to the job of battling the coronavirus.

"The delay now is because of the measures the country needs to take to fight the pandemic," said attorney Soledad Deza, an abortion rights activist from the northwestern Argentine province of Tucumán. "Next it will be because the country will need to focus on rebuilding after the pandemic.

"The bitter truth is that, deep down, we don't know when the right moment will come again."

In Chile last fall, Fridays became days of protest. The nation of 18 million had been a model of development and an island of stability in South America. Demonstrations that erupted in October against transit fare increases broadened to take in multiple grievances. As protesters set buses, metro stations and government buildings ablaze, authorities deployed soldiers in the streets of the capital for the first time since the military dictatorship of Augusto Pinochet ended in 1990.

President Sebastián Piñera promised to suspend fare increases, raise the minimum wage and hold a referendum on whether to replace Chile's dictatorship-era constitution. Still, the protests raged into March.

Then confirmed coronavirus cases shot up from less than 50 to more than 3,000 in a matter of weeks. Santiago's Plaza Italia, ground zero for the weekly demonstrations, now stands eerily silent. Calls to march have given way to pleas, even by activists, to stay indoors. The referendum has been put off until October.

On Friday, Piñera sparked outrage when he was photographed in the now largely empty square. The images quickly went viral. He described the incident as a spur-of-the-moment move on his way home from work. Furious protesters said it smacked of political gloating.

But they're also moving to adapt. They've been callingcacerolazos - balcony-bound pot-and-pan-banging protests traditional in Latin America - loud enough to drown out music and conversation inside homes. An artist's collective, Intermediate Depression, published an illustrated "manual for protesting from home" on Instagram, encouraging Chileans to deck their balconies with protest signs, "share [their] favorite songs with [their] neighborhood" and engage in cyberactivism.

"Being safe can't simply mean abandoning the historic movement we've been seeing in our country," said Emilia Schneider, president of the Student Federation of the University of Chile, which has been involved with the protests.

Virus-proof protesting has, in fact, gone global. Seventeen-year-old Swedish climate activist Greta Thunberg - who recently declared that she had symptoms of the coronavirus - has begun calling "virtual strikes" on Fridays. Followers are posting climate messages on their windows, snapping photos and blitzing social media with hashtags such as #DigitalStrike and #ClimateHowl.

In some countries, zero tolerance during national lockdowns is putting an abrupt end even to scaled-down demonstrations. In India, for example, women protesting an anti-Muslim citizenship law trimmed their months-long landmark sit-in in New Delhi to just five participants. Still, authorities hauled off the demonstrators. Hundreds of similar protests across the country have ended, either shut down by police or disbanded voluntarily over virus fears.

Repressive and corrupt governments are reaping at least temporary rewards from the pause in protests. In socialist Venezuela, the U.S.-backed movement to oust authoritarian President Nicolás Maduro had already been losing steam when the pandemic hit. Strict new limits on movement, coupled with a decision by opposition leader Juan Guaidó to stop his street rallies in the name of public health, have crippled the effort.

"This could be the end of the Guaidó movement," said Dimitris Pantoulas, a Caracas-based political analyst.

In Iraq and Lebanon, measures to contain the outbreaks have extinguished what remained of protests that had rocked those nations for months. Both countries are now under nationwide curfews. Protesters concede they've lost their momentum, even as they watch the government corruption and mismanagement they decried hamper authorities' efforts to respond to outbreaks.

In Baghdad and across southern Iraq, protesters were still joining rallies by the thousands as recently as a few weeks ago. Some are home now, for the first time in months, watching Netflix and sharing photos online from their uprising's headiest days.

Mohamed Khalili, 24, was wounded repeatedly during five months of street clashes with police in the capital.

"I didn't want to leave, but it's the right thing to do," he said. "If we'd stayed, we would have been seen as irresponsible."

The movement hasn't been silenced completely. Young men in the southern city of Nasariyeh gathered in the street on Friday to vent frustrations at their restrictive curfew. Riot police responded with what appeared to be live ammunition.

In Brazil, Latin America's largest nation and the one hit hardest by the coronavirus, the pandemic has brought a novel twist. Rather than quell a social movement, President Jair Bolsonaro's response to the coronavirus appears to be fueling one.

Bolsonaro has dismissed the virus as "a little cold" and a "fantasy." While Brazilian state governors have ordered quarantines and lockdowns, Bolsonaro has encouraged Brazilians to get out and go to work.

Now the people of Rio de Janeiro and Sao Paulo are taking to their balconies nightly for earsplitting panelaços- the Brazilian version of cacerolazos - to demand that the president take social distancing more seriously.