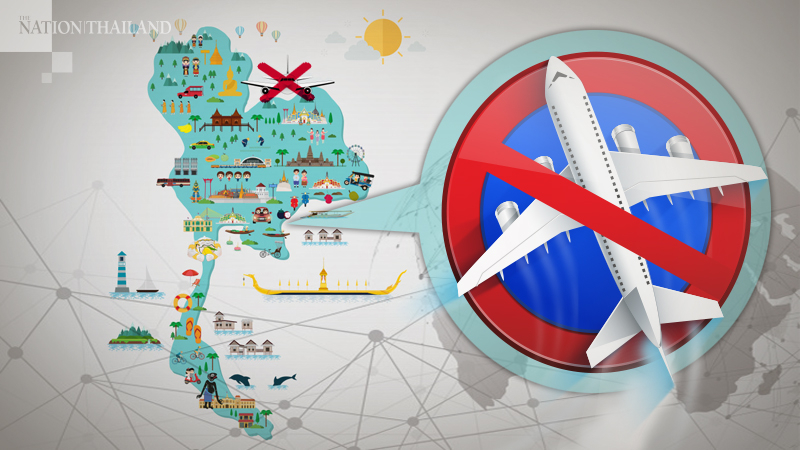 The sudden two-day complete flight ban imposed by civil aviation authorities have been frustrating for Thai families whose members are abroad and want to come home amid the Covid-19 pandemic.

Watana Muangsook, a former Pheu Thai Party MP, expressed frustration about difficulties his US-based daughter faced when she tried to return to Thailand.

His daughter was told to leave the plane while it was about to take off from New York at 2pm local time on Saturday, he said on his Facebook page.

The government suddenly imposed a flight ban, prohibiting aircraft carrying passengers from entering the country for two days -- from April 4 to 6 -- in an effort to slowdown the spread of the Covid-19. On Friday, some returnees were involved in a standoff with authorities over the need to be quarantined.

Watana said his daughter had followed all requirements set by the government including getting the "fit to fly" health certificate 72 hours before the flight departure. He said she had got all the required documents before the government ordered Thais to delay their entry and plane officials told her to leave the aircraft because of a flight ban enforced by the Thai government.

To prevent Covid-19 people from entering the country, the Civil Aviation Authority of Thailand (CAAT) had earlier announced that Thais overseas who wish to return home must obtain a fit-to-fly medical certificate issued within 72 hours of departure and a letter issued by the Royal Thai Embassy or consulate.

The government has also asked Thais living abroad to delay their return until April 16.

Watana said the government order barring Thais overseas from returning until April 16 violated the human rights provision under the Constitution. As the health certificate is valid for only 72 hours, getting a new certificate will impose an additional cost burden on Thai travellers, he said.

The abrupt flight ban imposed by the CAAT is ridiculous and demonstrated the government's failure in handling the issue, he fumed.

Many other people shared similar views. Salintorn Thongmeensuk, a research fellow at Thailand Development Research Institute, also criticised the fit-to-fly mandatory requirement as imposing a high cost burden and also put Thais at risk of contracting the virus when they visit a hospital for the certificate.

The fit-to-fly measure forced airlines to deny boarding passes to people who did not have the medical document. Many overseas Thais complained about the complications of this regulation, while some of them have filed a complaint with the Central Administrative Court and started an online campaign #bringthaihome.