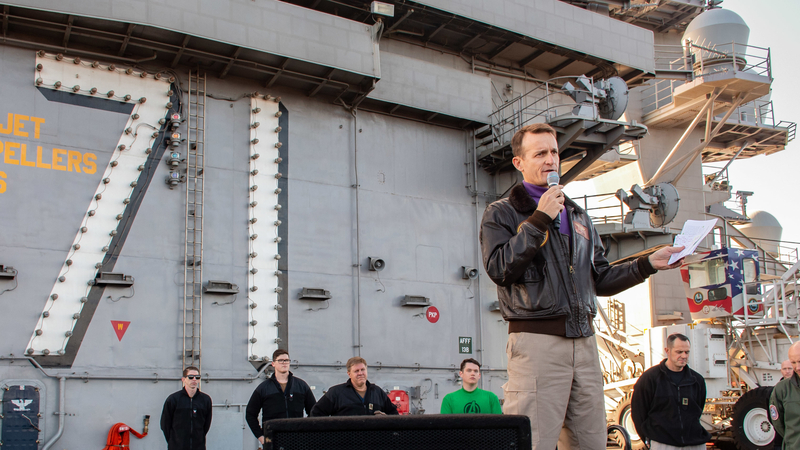 Former vice president Joe Biden on Sunday sharply criticized the firing of Capt. Brett Crozier, who was removed from his post as commander of the USS Theodore Roosevelt after speaking up in a leaked letter to his superiors about the handling of a coronavirus outbreak aboard the vessel.

"I think it's close to criminal, the way they're dealing with this guy. ... The idea that this man stood up and said what had to be said, got it out that his troops, his Navy personnel, were in danger, in danger - look how many have the virus," Biden said in an interview on ABC News' "This Week."

He added that Crozier "should have a commendation, rather than be fired."

Crozier was relieved of command on Thursday at the direction of acting Navy secretary Thomas Modly, who said Crozier had shown "poor judgment," although he did not directly accuse Crozier of leaking the letter. Two days later, President Donald Trump defended Crozier's ouster, telling reporters at the White House that it was "not appropriate" for Crozier to have written the letter.

On Saturday, the Navy said 155 service members on the USS Theodore Roosevelt had tested positive for the coronavirus, the U.S. military's largest coronavirus outbreak to date. The service added that 44 percent of the crew had been tested for the virus.

Defense Secretary Mark Esper on Sunday defended Crozier's dismissal, saying in an interview on CNNs' "State of the Union" that Modly had "lost faith and confidence in the captain based on his leadership."

Esper argued that any suggestions that the Pentagon had failed to protect the service members aboard the aircraft carrier were part of a "completely false narrative."

"We've been on top of this from the earliest days," he said.

Esper declined to say whether Trump had ordered the firing, noting that an investigation was still underway and that "when all those facts come to bear, we'll have a chance to understand why the secretary did what he did."

Crozier's firing, Esper added, was "just an example of how we hold people accountable for their actions."