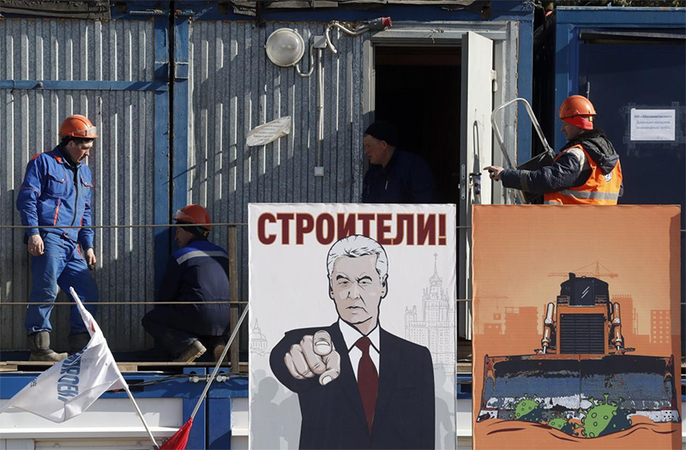 MOSCOW - As soon as the digital code is created on a cellphone, the clock is ticking. It allows three hours to shop at the nearest grocery store or pharmacy, or visit a doctor. One hour is allotted to walk the dog. Taking out the trash should take no more than 30 minutes.

Russia's Nizhny Novgorod region, about 250 miles northeast of Moscow, boosted its coronavirus-control measures Saturday by adding a system of downloadable QR codes - those square bar code mazes of lines and boxes - in the latest attempt to use tracking technology to battle the pandemic.

But Moscow - which normally sets the tone for the rest of the country - backed off from deploying a similar system of time-specific QR codes. Moscow officials said a decrease in foot traffic around the capital made the plan unnecessary.

The decision came as Moscow's mayor, Sergei Sobyanin, acknowledged that "a huge number of questions arose" about requiring a QR-code pass to move around the city. And opposition politicians and rights groups pushed back hard.

Daria Besedina, a Moscow opposition lawmaker, said the measures were akin to a "digital concentration camp."

Moscow's about-face on the QR codes is more than a simple change of plans. Russia under President Vladimir Putin appears to be less willing to embrace the kind of sweeping state-run tracking favored by other authoritarian nations amid the novel coronavirus pandemic, perhaps mindful of provoking public anger and worry that the monitoring could become a permanent fact of life.

In a televised national address Thursday, Putin transferred the responsibility of adopting coronavirus-related restrictions to local governments. That's turned some of Russia's regions into testing grounds for how much increased surveillance citizens will accept while also sheltering the Kremlin from any blowback.

Russia's confirmed coronavirus cases have multiplied in the past two weeks. Officials said there are 4,731 confirmed cases as of Saturday and 43 deaths.

Still, the relatively low level of spread has not yet pushed Putin's government to make decisions on whether to follow other countries and ramp up the state-surveillance machinery beyond facial recognition.

China's measures have included drones and digital bar codes on mobile apps that reveal a person's health status. Singapore rolled out an app that uses Bluetooth signals between cellphones to see if potential carriers of the coronavirus have been in close contact with other people. Israel is tracking its citizens through their cellphone location data.

Russia's parliament swiftly passed legislation last week creating severe penalties, including a possible prison sentence, for breaking quarantine rules. In Moscow, police patrols are light, but still do random stops to ensure people are shopping or have other legitimate business away from home, such as a medical visit. The city's authorities also warned that its more than 170,000 cameras are watching for anyone trying to skirt the rules.

"We think it can lead to unauthorized access and therefore to the mass infringement of people's privacy," said Sarkis Darbinyan of Roskomsvoboda, a digital rights group. "This is a concern right now in the Russian society."

Moscow officials say the QR system still remains an option in the capital, which has about 70 percent of Russia's confirmed coronavirus cases. Sobyanin, the city's mayor, said the QR-code passes are ready for use and will be required "in case of an unfavorable development in the epidemiological situation, or in the case of an increase in the number of violations of the stay-at-home order."

Experts, too, were skeptical that Moscow could have the system functional in just one week.

Andrei Soldatov, author of "The Red Web: The Struggle Between Russia's Digital Dictators and the New Online Revolutionaries," said it would entail "building up an entirely new huge database from scratch and then getting all people living in Moscow to provide their personal data to that database."

But he added that "when fear runs the city, as it is in Moscow these days, the authorities could do almost anything in terms of surveillance."

Moscow is opting against testing that with its general population for now.

But a separate app just to track patients who have tested positive for the coronavirus briefly appeared in the Google Play store on March 25 before it was removed, apparently made public too early by Russian officials.

Called "Social Monitoring," the app requested access to a user's location, camera, audio and any wearable devices. Though the QR-code system has been temporarily tabled, "Social Monitoring" seems to be going ahead.

In an interview with the independent Echo of Moscow radio station, Eduard Lysenko, the head of Moscow's Department of Information Technologies, said anyone against installing the app on their phone could opt to receive a temporary cellphone from the city to carry the app.

"These measures are absolutely crazy, and they will not only allow enforcement in this case," said the opposition lawmaker Besedina. "It is something that will open a possibility for later misuse when controlling people."

Putin's declaration that regional governments can largely do as they wish where the coronavirus is concerned gave Nizhny Novgorod the greenlight to try out its QR-code pass system. In announcing the measure, the governor, Gleb Nikitin, said: "I understand there will be many skeptical comments."

In a statement to The Washington Post, Nizhny Novgorod's press office said: "It is assumed that the app can use the GPS function for geolocation. In cases where the GPS function is not available, access to the subscriber's network connections - cell towers or WiFi access points - can be used to determine the approximate location."

The statement added that there are no plans to use microphone access and "none of the app's functions can be used covertly" or for any unrelated purpose, and "personal data received by the application will be securely protected in accordance with the requirements of current legislation. Their transfer to third parties will be excluded."

"I fear that there's a danger," said Besedina, the opposition lawmaker, "because when you crack down on people, when you stop trusting them, the mistrust is mutual."