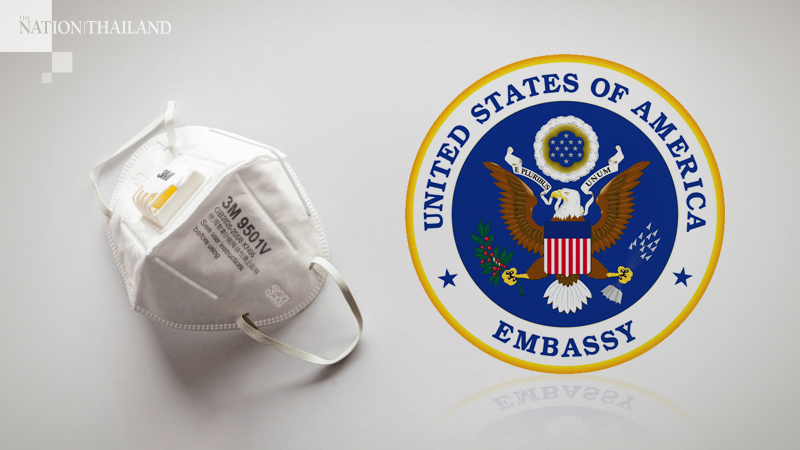 The US embassy in Bangkok is denying reports suggesting that a shipment of face masks designated for Germany was seized at the airport and diverted to the United States, while Thailand’s Customs Department has also said that there has been no such action from the United States.

The comment from the embassy came after the Wall Street Journal reported that a shipment of face masks manufactured in China and heading for Germany had been seized at a Bangkok airport and diverted to the US.

“The United States Government did not take any action to divert any 3M supplies that were destined to Germany nor did we have any knowledge of such a shipment,” the US embassy said in response to The Nation’s enquiry.

“Leaders around the world are grappling with unprecedented challenges as they tackle the Covid-19 global pandemic. The United States is significantly increasing production of materials domestically while working through appropriate channels to purchase excess supplies from other nations to meet our needs.

“At the same time, the United States is working in solidarity with our partners and allies to provide humanitarian assistance to countries in need and take all possible measures to combat the spread of coronavirus,” said the embassy.

The US government has been clear that action will be taken against price-gouging and pandemic profiteering, and we take seriously incidents that are reported, the embassy said, adding “we remain concerned about pervasive attempts to divide international efforts through unsourced, unattributed disinformation campaigns”.

Meanwhile, Customs Department spokesman Chaiyuth Kamkhun said no shipments of the aforesaid items had been confiscated at a Bangkok airport. He also quoted a German customs official who works in Thailand as saying that he did not know of any such shipments being seized in Bangkok.

There is a severe shortage of face masks, ventilators and personal protective equipment (PPE) across the world as government rush to place orders as the Covid-19 pandemic worsens.

The Washington Post has reported that the Trump government is scrabbling to scoop up medical supplies, angering Canada and Germany. The Washington Post also reported that late on Thursday (April 2), the White House ordered face mask manufacturer, 3M, in Minnesota to prioritise US orders over foreign demand, using its authority under the Defence Production Act to try to ease critical shortage of N95 masks in US hospitals.