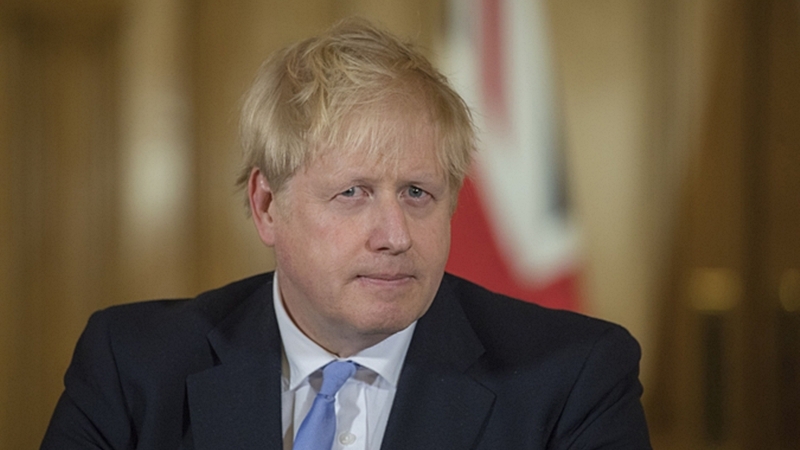 LONDON - Prime Minister Boris Johnson, one of the first world leaders diagnosed with covid-19, was moved into an intensive care unit on Monday evening after his condition worsened, his official spokesman said.

The prime minister asked Foreign Secretary Dominic Raab to "deputise for him where necessary," giving Raab the power if needed to run the British government during this health crisis.

Johnson remained conscious and was moved to the ICU as a precaution should he require mechanical ventilation, according to 10 Downing Street.

Raab said Johnson was in "safe hands with a brilliant team" and was receiving "excellent care" at the hospital. Asked by the BBC whether he was confident that the government "was under control tonight," Raab said, "There's an incredibly strong team spirit behind the prime minister."

Johnson, who had been in quarantine at his official residence since testing positive for coronavirus on the night of March 26, was admitted to St. Thomas' Hospital in London on Sunday evening with a persistent cough and fever.

On Monday, while he was said to be "under observation," the prime minister tweeted, "Last night, on the advice of my doctor, I went into hospital for some routine tests as I'm still experiencing coronavirus symptoms. I'm in good spirits and keeping in touch with my team, as we work together to fight this virus and keep everyone safe."

Johnson's move to the ICU - around 7 p.m. - demonstrated the seriousness of his condition. In Italy, Spain and China, experience has shown that mortality rates soar for those admitted to ICUs.

Nathalie MacDermott, a clinical lecturer at King's College London, said that if Johnson was still conscious, it was highly unlikely he would be on a mechanical ventilator.

"They might be putting him on some other form of noninvasive ventilatory support," she said. "So, a mask that delivers a degree of pressure, so it helps to offset some of the distressing breathing. That's what they would try first."

Although Downing Street said the move was a precaution, MacDermott said the prime minister wouldn't be moved to intensive care without his doctors "giving him some form of breathing support - otherwise he could have stayed on the ward" where he was being observed.

All day Monday, Johnson's office declined to describe what tests or treatments he had received or say whether he had developed breathing problems or pneumonia, two of the common symptoms for coronavirus patients sick enough to be admitted to the hospital. Until he was moved to the ICU, Johnson was said by his staff to be working from his bed.

"Over the course of this afternoon, the condition of the Prime Minister has worsened and, on the advice of his medical team, he has been moved to the intensive care unit at the hospital," said the spokesman, who by protocol is not named.

As the Downing Street statement was read out on the BBC, the state broadcaster showed aerial footage of St Thomas' Hospital, where police officers were stationed outside. The hospital is on the south bank of the River Thames, directly across from Big Ben and the Palace of Westminster.

The 55-year-old Johnson has no known underlying health conditions.

He was last seen by the public in a short video posted Friday on his Twitter feed, urging Britons to remain indoors except to go shopping, visit the doctor or exercise. In the clips, he looked ragged, with puffy eyes and pale skin.

After the news broke that he had been transferred to the ICU, wishes for a speedy recovery poured in from around the world.

President Donald Trump said at a news conference: "I also want to send best wishes to a very good friend of mine and a friend to our nation, Prime Minister Boris Johnson. We're very saddened to hear that he was taken into intensive care this afternoon, a little while ago. And Americans are all praying for his recovery. He's been a really good friend. He's been really something very special - strong, resolute, doesn't quit, doesn't give up."

Trump said he asked two pharmaceutical companies he spoke with on Monday to "contact London immediately" to offer help to Johnson.

French President Emmanuel Macron wrote, "I hope he quickly overcomes this ordeal." Spanish Prime Minister Pedro Sánchez said these are difficult days and offered an embrace for the British people.

Johnson's fiancée, Carrie Symonds, who is pregnant with the couple's first child, is herself recovering from the symptoms associated with covid-19, though she has not been tested.

On Sunday night, around the same time Johnson was admitted to the hospital, the queen delivered an extraordinary public address, in which she spoke of "an increasingly challenging time. A time of disruption in the life of our country: a disruption that has brought grief to some, financial difficulties to many, and enormous changes to the daily lives of us all."

The rules for who takes over if the prime minister becomes incapacitated are not as straightforward in Britain as in the United States, where the vice president would assume the duties.

Although Johnson has designated Raab as his stand-in, that might require cabinet approval.

"It isn't as cut-and-dry and black-and-white as it is in the U.S.," said Tim Bale, a professor of politics at Queen Mary University of London. "Were somebody to be suddenly struck down and there were no named interim in place, it would ultimately be up to the cabinet to decide. . . . The prime minister is not the chief executive the way the president is."

Bale said it wasn't surprising that Johnson didn't immediately step aside. "It's very difficult for prime ministers to relinquish their power, emotionally speaking," he said.

He added that Raab getting the official nod would be complicated by his "limitations as a public communicator" and the fact that most people would point to another senior minister, Michael Gove, as the de facto deputy prime minister.

Johnson announced he had the coronavirus on the same day as Health Secretary Matt Hancock and England's chief medical officer, Chris Whitty. But Hancock and Whitty were back at their lecterns for a news conference on Monday.