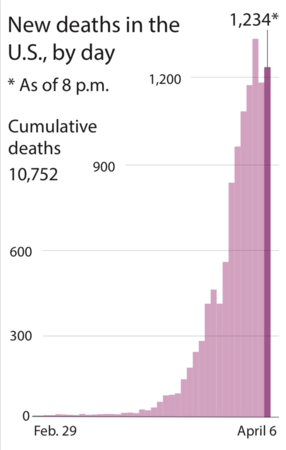 The number of covid-19 deaths in the United States sped past the 10,000 mark on Monday as the disease ramped up the strain on bedrock systems of American life and death: hospitals, governments and morgues.

In New York, a hot spot of the outbreak, the governor pleaded for more beds to treat victims and the mayor contemplated starting emergency graveyards. In Wisconsin, the Democratic governor tried to cancel in-person voting in Tuesday's primary, but a court blocked him.

Overseas, British Prime Minister Boris Johnson, the most prominent world leader infected by the virus so far, was moved into intensive care on Monday as his symptoms worsened. It was a striking escalation of the pandemic's influence on highly visible world leaders: Canadian Prime Minister Justin Trudeau self-isolated recently after his wife tested positive, and Israeli Prime Minister Benjamin Netanyahu is also self-isolating, even as he negotiates to form a new government.

Yet there were new reasons for hope in a few of the worst-hit parts of the United States and Europe. That was enough to spur the U.S. stock markets, which have careened wildly during the crisis, to soar more than 7% Monday, with the Dow Jones industrial average closing up 1,627 points.

In both Italy and Spain, the number of new coronavirus cases fell to their lowest levels in weeks. In New York state, Monday's death toll was about the same as Sunday's, and Democratic Gov. Andrew Cuomo said that might be a sign that social distancing measures had slowed the virus's spread.

On the political front, President Donald Trump and former vice president Joe Biden, who leads in the race to become the Democratic presidential nominee, spoke Monday afternoon about covid-19 after weeks of sometimes nasty exchanges.Trump characterized the phone call with Biden as "a really warm, wonderful conversation."

Still - after weeks of death, fear, empty streets and economic catastrophe across much of the world - even the good news was devastating. On this relatively encouraging day in New York, the state reported 599 deaths.

At his daily media briefing, Trump praised Americans for adhering to social distancing guidelines - and his own administration for its reaction to the pandemic. "Things are going really well," he said.

"Light at the end of the tunnel," Trump added, in what has become a recent catchphrase.

In Britain, Johnson announced March 27 that he had tested positive for the virus and said at the time that he had only mild symptoms. But Johnson developed a persistent fever and cough, and on Sunday, he was admitted to a London hospital.

On Monday, after those symptoms worsened, Johnson was moved to intensive care. A British government representative said he "remains conscious at this time" - but raised the prospect that Johnson would require a ventilator, a mechanical breathing apparatus used in the most serious cases.

"He has been moved to the ICU as a precaution should he require ventilation to aid his recovery," the spokesperson said.

Johnson's deputy, Dominic Raab, was charged with running the government in Johnson's absence should it prove necessary.

Britain has confirmed 51,608 coronavirus cases and reported 5,373 deaths from the virus, the fifth-highest confirmed death toll of any country during the pandemic. That is higher than the official death toll for China, where the outbreak began, though some experts have questioned the accuracy of China's figures.

In the United States, a new report from a federal watchdog Monday found that many hospitals fighting the virus are running desperately short of protective equipment, tests, medical staffers and bed space.

The report, released by the inspector general of the Department of Health and Human Services, found that some hospitals were being forced to scrounge masks from auto body shops and nail salons. One hospital made its own hand sanitizer by mixing gel used for ultrasounds with alcohol from a nearby distillery, the report said.

The document, which covered the period of March 23-27, quoted a hospital administrator as deploring the industry-wide shortage of coronavirus tests: "Millions are needed, and we only have hundreds."

One hospital official reported getting children's masks instead of adult sizes, and another described a batch where many were useless because the elastic bands had dry-rotted. Still another hospital administrator said his facility has received equipment that had expired in 2010.

The report was the first public federal assessment of hospitals' ability to cope with the flood of infected patients in coronavirus hot spots. It seemed to refute some of the more upbeat assertions from the president and his team - that anyone who wants a test can get one and that some doctors complaining about shortages are being greedy.

"Hospitals across the country reported facing similar challenges, regardless of which stage of the process they were in - treating patients with [the virus], testing patients who were potentially infected, or preparing to treat covid-19 patients in the near future," the report concluded.

Trump, at his briefing, disputed the report's conclusions. "It's wrong," he said.

Then he was asked about the inspector general, who serves as an in-house watchdog for the Department of Health and Human Services. "What's his name?" Trump asked. "Find me his name. Let me know." The office is led by an acting leader, Christi Grimm; the previous inspector general left in December, and Trump has not nominated a replacement.

When another journalist asked about reported problems with a loan program intended to help small businesses, Trump scolded the reporter for not saying that the program was "tremendous," adding, "You're just incapable of asking questions in a positive way."

In New York state, which accounts for about one-third of all known covid-19 cases in the U.S. and half the deaths, it's not just the hospitals that are swamped. On Monday, New York Mayor Bill de Blasio, a Democrat, said deaths were overwhelming the city's funeral homes and crematories, prompting the consideration of unconventional solutions.

"We may well be dealing with temporary burials," de Blasio said at a news conference.

If that proves necessary, the city would bury a person temporarily, disinterring them later for proper burial when the crisis has passed. The mayor did not say where the city was planning to bury virus victims, though New York has previously used an island in the East River to bury the indigent and unclaimed.

Trump, meanwhile, granted a request from Cuomo to allow the U.S. Navy hospital ship Comfort - now docked in Manhattan - to accept covid-19 patients. The ship arrived last week, intending to relieve pressure on New York hospitals by taking patients who did not have the virus.

But Cuomo said there were few people in the hospital for other illnesses or injuries. With New Yorkers stuck inside their homes, he said, there are fewer car accidents, violent crimes and other causes of trauma, and opening the Comfort to virus patients "is the only way we sustain this level of intensity in the hospital system."

Trump announced at his news briefing that the ship would now take covid-19 patients from New York and New Jersey.

Still, he said that so far the city's hospital system has not lost a patient because of the lack of a ventilator, or doctor or bed. "To the extent we can find peace in that, it helps me," he said.

In Wisconsin, the virus has thrown the political system into turmoil. The state is set to conduct in-person voting Tuesday, for the presidential primary and other races, despite warnings that doing so could endanger voters.

Gov. Tony Evers, a Democrat, declared Monday that he was canceling in-person voting, while mail-in ballots would be accepted for a longer period. But Republican leaders insisted Evers had no authority to take such action, and a court decision later Monday backed them up.

"At the end of the day, this is about the people of Wisconsin," Evers said in an interview. "They frankly don't care much about Republicans and Democrats fighting. They're scared. We have the surgeon general saying this is Pearl Harbor. It's time to act."

GOP leaders have said that canceling the vote would cause too much confusion and upheaval. Democrats say Republicans' true goal is to hold a low-turnout election they believe would favor their candidates.

Across the United States, political leaders as well as medical experts were hopeful that glimmers of positive news in Europe provided a much-desired reason for optimism, even while cautioning that the outbreak remains mysterious and unpredictable.

Italy announced 3,599 new cases of the novel coronavirus, the lowest daily increase since March 17. The country also reported 636 deaths, far lower than the recent high of 919 deaths on March 27.

Luca Richeldi, a doctor at Gemelli hospital in Rome and a member of the government's scientific advisory committee, said the new numbers "reaffirmed the reassuring trend that we have seen for a few days" and suggested that the government's containment measures were working.

In Spain, the government reported that 637 people had died in the previous 24 hours, marking Spain's lowest number of deaths in two weeks. "These figures confirm the downward trend and stabilization," Health Minister Salvador Illa said.