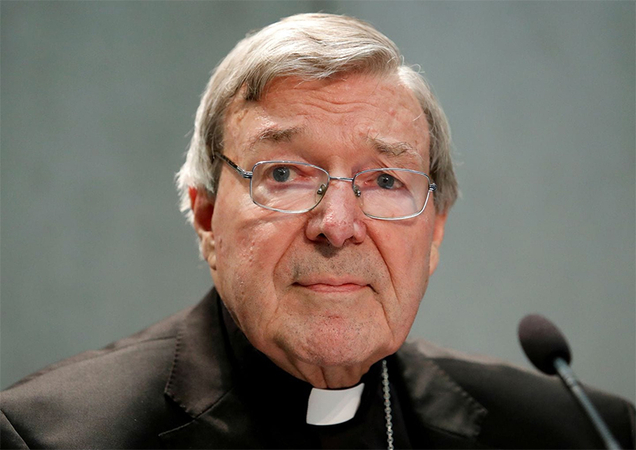 By Special To The Washington Post · A. Odysseus Patrick · WORLD, RELIGION, ASIA-PACIFIC

SYDNEY - Cardinal George Pell, the most senior Catholic priest convicted of pedophilia, was declared not guilty by Australia's highest court and is expected to be released from prison Tuesday.

The High Court of Australia overturned decisions by two lower courts that had convicted the 78-year-old prelate and sentenced him to six years in prison, based on the testimony of a man who said Pell sexually assaulted him and a fellow choirboy at a Melbourne cathedral in the 1990s.

Pell was the most senior figure in the Catholic Church to be jailed as part of a wave of court cases around the world against priests alleged to have committed serious sexual misconduct.

The court said there was "a significant possibility that an innocent person has been convicted because the evidence did not establish guilt to the requisite standard of proof."

In a written statement, Pell said he felt no ill will toward his accuser and did not want his acquittal to add to the bitterness in the community.

"There is certainly hurt and bitterness enough," he said. "However, my trial was not a referendum on the Catholic Church, nor a referendum on how church authorities in Australia dealt with the crime of pedophilia in the church.

"The point was whether I had committed these awful crimes, and I did not."

Pell's original guilty finding, by a unanimous jury in 2018, was upheld by an appeals court in August, prompting the archbishop of Sydney, Anthony Fisher, to note what he described as the "divided opinion amongst legal commentators and the general public" about the facts of the case.

The decision is likely to upset Pell's many detractors, who hold him responsible not just for the alleged assault on the choirboys but for the broader record of the Catholic Church in Australia, where about 4,400 people reported being abused in recent decades, according to an official inquiry. Their average age was about 11 years old.

"This is (one of the reasons) why sexual abuse crimes are not pursued by victims," an Australian venture capitalist, Elaine Stead, wrote on Twitter. ". . . Reasonable doubt is easy to create. Credibility is not factored highly enough."

In a summary of their decision, the High Court judges did not question the honesty of Pell's accuser. Rather, they said evidence from other witnesses should have raised reasonable doubt about Pell's guilt.

Other witnesses reported that the then-archbishop usually met congregants on the cathedral's steps after Sunday Mass, at the time when Pell was alleged to have sexually abused a boy in the priests' sacristy, or changeroom.

The appeal judges also cited evidence presented by Pell's lawyers that Pell's rank required that he always be accompanied when in his priestly robes in the cathedral, and that the sacristy was a busy place 10 to 15 minutes after Sunday Mass.

Lower-court judges, in rejecting Pell's earlier appeal, had "failed to engage with the question of whether there remained a reasonable possibility that the offending had not taken place, such that there ought to have been a reasonable doubt as to the applicant's guilt," the High Court judges wrote.

In their submissions to the High Court, Pell's lawyers did not attack the credibility of the single surviving victim.

Instead, they argued that even if the man's evidence was compelling or believable, it was not enough to eliminate the reasonable doubt raised by other witnesses that it wouldn't have been physically possible for the assaults to occur, given the robes Pell was wearing and the time available after Sunday Mass at St. Patrick's Cathedral.

Pell has been serving his sentence in a prison in Victoria state. He had been a leading figure in the Vatican until 2017, when the charges were announced. He then took a leave of absence from his role as economy minister, widely considered the third-most important position in the Vatican.