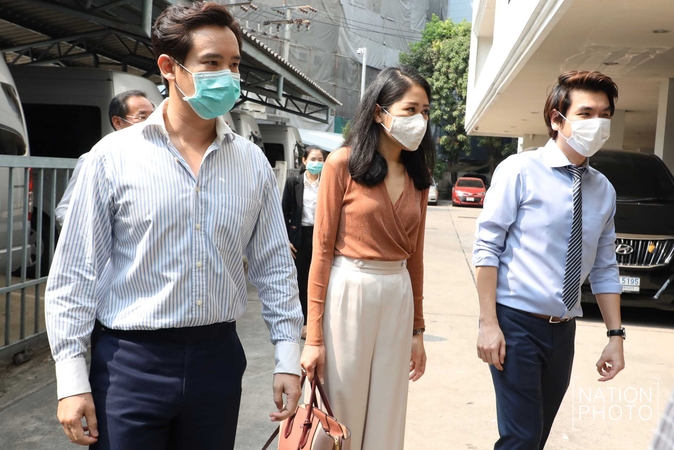 Piyabutr Saengkanokkul, Pannika Wanich and Pita Limjaroenrat, all former members of the now-defunct Future Forward Party, went to the Pathumwan District Court on Tuesday (April 7) to submit evidence and list of witnesses in their defence against charges of illegally organising a political rally last year.

Piyabutr, the party’s former secretary-general, along with Pannika, the party’s spokesperson, and Pita face charges of organising a flash mob at the Skywalk near the Bangkok Art and Culture Centre in Pathumwan district on December 14, 2019.

The three deny these charges, but the prosecution has demanded that they submit evidence in their defence before it decides whether the case should be heard in court on April 15.

Piyabutr and Pannika are among the 15 Future Forward Party executives who lost their MP status after the Constitutional Court dissolved the party on February 21 for violating the organic law on political parties. The 15 have also been banned from the field of politics for 10 years.

Meanwhile, Pita – who survived the ban – called on 55 MPs of the dissolved party to join the Move Forward Party (formerly known as Ruam Pattana Chart Thai Party) on March 8 and later became the party leader.