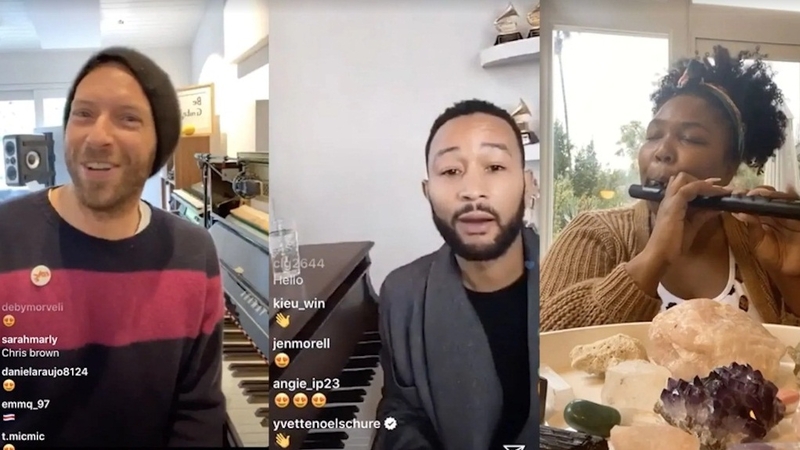 As self-quarantining in the face of coronavirus continues, many people have begun socializing via apps: organizing online happy hours, game nights, TV watch parties and more.

But with so many different apps available, it can be tough to figure out which fits your particular social habits. Here are a few suggestions.

Several weeks ago, it seemed like no one really knew about the video conferencing software Zoom. Then came covid-19, the disease caused by the novel coronavirus, and suddenly everyone scrambled to get the new hot app, which was downloaded 600,000 times in a single week.

Zoom has become a go-to app for video work meetings, happy hours and cocktail parties. The free version allows for up to 100 people to participate in a single chat - the catch being that these can last only up to 40 minutes. Some priced options allow up to 1,000 people and more time.

Its most attractive feature is how easy it is to use: A host creates a meeting and shares a link that takes you straight there. You can even join the meeting in a browser window - no need to install the app itself. Once in the chat, you have the option to use any of your saved photos as a makeshift background - you can appear to be at the beach, for instance, or inside a video game or in front of a giant image of your dog.

The app's sudden popularity has a downside, however, as Internet trolls have begun targeting calls to share unexpected violent images and pornography in a trend termed "ZoomBombing." The app also recently left thousands of recorded calls exposed on the open web. For better protection, experts suggest password-protecting calls and not publicly sharing their URLS.

Google Hangouts, another popular option that comes with Gmail or can be downloaded as a Chrome extension, offers much the same capabilities as Zoom, though the free version allows for only 25 people in a single chat. (It does offer the opportunity to share GIFs and emoji while live, a feature Zoom does not have.) And Skype remains reliable but can be frustrating to use, requiring extra steps to invite nonregistered users to a group chat.

While all the other video chat services mentioned above would work for a long-distance date night, Facebook Messenger, Apple's FaceTime, Google Duo and WhatsApp would also suffice. They allow fewer people per call than the others.

If you want to meet new people

Discord can be useful if you're hoping to connect beyond your social circle. Originally created as a platform for gamers, it's set up like an enormous message board. You can create your own chat (as with Zoom or the others mentioned earlier), but what's unique is that you can also join one of the preexisting semiprivate servers (if you can snag an invite, which isn't difficult - often you can find these with a quick search on social media). While Discord hosts video chats, it's primarily used for voice- or text-based group chats, meaning it's best for when you want to be engaged with friends while doing something else, such as gaming, painting or what have you.

And if you're looking to meet someone romantically without breaking self-isolation, the dating apps are trying to help. Plenty of Fish, for instance, recently announced a feature that allows users to pitch themselves via live stream, engage in speed dating or break off into one-on-one video chats with other users. Match has similar plans for a video feature in the near future. Tinder has temporarily made its Passport feature - which allows you to meet people outside your geographical area - free to everyone.

If you want to play games

Houseparty, a video app released in 2016, has also seen a surge during the pandemic. Like the others mentioned above, it supports basic video chat - including for groups - with a few key differences. Instead of requiring you to set up a hangout, you can simply log in and see which of your friends are online, which will remind some people of AOL Instant Messenger from the 1990s. You can also send video voicemails (called "facemails"). But the main difference is that it comes with a variety of simple multiplayer games, such as trivia and card games. You don't have to play them, but the option is always there.

If you want to have a dance party

If you're willing to hang out solely via text, and if you and your friends enjoy swapping tunes, Plug.DJ is an app to try. It allows everyone in a party to queue their own music videos in a master list, meaning no one person needs to pay particular attention to the app to keep the party going. Sure, you can't talk to one another with your voice, but even in a real club, you can't hear each other anyway.

The Chrome extension Netflix Party lets you watch a flick while chatting about it with your self-quarantining friends, and it requires only two things from everyone: a subscription to Netflix (which more than half of the United States already has) and the Chrome Internet browser (which is free and easy to acquire).

One person fires up a Netflix video in their Chrome browser, then clicks on the extension button to begin a "party" and sends a unique link to anyone interested in joining. Click the link, and whatever the host is watching will pop up, along with a small text chat window that allows for your "Mystery Science Theater 3000"-esque group banter. A test by The Washington Post revealed that the video doesn't sync up precisely among screens (even on computers connected to the same WiFi router), but the disparity is minimal enough to probably go unnoticed.

If you're seeking something a bit more robust, twoseven lets you create a watch party for videos on Hulu, Amazon Prime, HBO YouTube, Vimeo and others, in addition to Netflix. Though a bit more complicated to use than Netflix Party, it allows you to share private videos stored on your computer and includes the option to simultaneously use your webcams so you can see all your friends and truly feel like you're watching together.

If you want to watch a concert

Since quarantine began, artists ranging from Coldplay's Chris Martin to John Legend have been taking live shows to the Internet. For some, such as Death Cab for Cutie's Ben Gibbard, that means intimate shows broadcast from a home studio, while others such as the Dropkick Murphys put on a full show. Then there's DJ D-Nice, who has been hosting online dance parties that have attracted fans including Dave Chappelle and Michelle Obama.

There's no constant for where these shows appear. Some stream on Instagram Live, some on Facebook, some on YouTube and some on Twitch. All allow the same basic experience: You get to watch the show and, if you choose, join in live commenting on the goings-on - if you're not too busy dancing.

The best thing to do is to check your favorite musicians' social media feeds for updates. Mix in another app - such as Facebook or Zoom - to connect with a sweetheart or a group of friends, and it's like going to a concert together, without having to worry about parking.