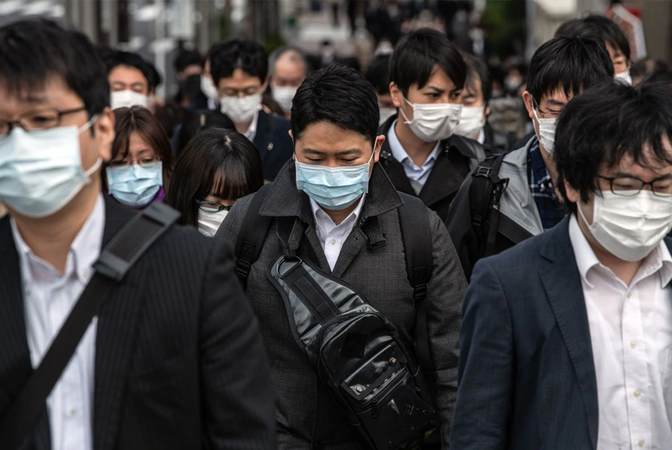 TOKYO - It's a state of emergency over Tokyo but no lockdown.

On Tuesday, Japanese Prime Minister Shinzo Abe declared a state of emergency in Tokyo and six other prefectures most severely affected by the new coronavirus, for around a month.

Abe told parliament he aims to reduce social contact by 70 to 80 percent, but the government "will not lock cities down as has been done overseas," while economic activity will be maintained as much as possible. He also announced an "unprecedented" economic rescue package, equivalent to around 20 percent of gross domestic product.

The government, they say, has dithered in the face of an explosion in infections in the capital, and is still reluctant to impose the sort of extreme measures necessary to contain the virus - largely over concerns about the economic impact.

"It's too late," said Kenji Shibuya, director of the Institute for Population Health at King's College, London, who warns the Japanese capital could soon be facing the sort of calamitous rise in infections and deaths experienced in New York.

"Tokyo has already entered an explosive phase, and the only way to stop the collapse in health care was to lock down the city as early as possible."

Under a state of emergency, people will be asked to refrain from going out, but there will be no penalties for noncompliance. Companies will be asked to institute remote working, and local governments may ask schools, cinemas and gyms to close, but trains will still run and "essential" services will remain open.

But what constitutes an essential service? Under a draft plan for Tokyo obtained by the Mainichi newspaper, health-care facilities, supermarkets, convenience stores, hotels, factories, and public baths will remain open, while restaurants may be asked to cut opening hours. Public transport will still run.

Museums, libraries, barbers, Internet cafes, department stores, shopping malls, bowling allies and skating rinks may be asked to shutter, although there may be exceptions for small businesses. Tokyo's government says it is still deciding whether bars, nightclubs and hostess bars that also offer food will be asked to close their doors.

For many experts, this is too little, too late.

Infections are surging in Japan, with around 250 new cases reported Monday and the cumulative total topping 4,100. It's in the capital city that the crisis is most acute, with more than 1,000 people hospitalized and beds already at full capacity.

The hazard lights were flashing two weeks ago, with leading experts warning that a "second wave" of infections had already begun to take hold.

Even as concerns mounted, thousands of pachinko parlors, crowded, smoky venues that host a form of legalized gambling, remained open.

Six days ago, the Japan Medical Association warned that the medical situation had become critical and urged the government to declare a state of emergency.

The same day, the Japan Society of Intensive Care Medicine said the country had only five ICUs per 100,000 people, half that of Italy, and warned "overshoot in terms of the number of deaths will come very soon." The government's expert panel then said it was "highly likely" the disease was rampant.

That, says Shibuya, was pretty much the last chance to stop the explosion.

Still, at a Saturday meeting, the government was divided, with Deputy Prime Minister Taro Aso opposed to an emergency declaration and warning it would put the economy in "dire straits," the Asahi newspaper reported.

Part of the problem: Japan's ruling Liberal Democratic Party has extremely close ties with the business community, while Abe himself is keen to preserve his long attempt to revive Japan's sluggish economy, known as Abenomics.

So while Abe moved swiftly to ask schools across the country to close at the end of February - at a time when his own expert panel said such a move was premature - he has been much slower to take action that would undermine the economy.

In part, Japan has been lulled into a false sense of security partly by a lack of widespread testing for the virus but also by its early success in containing the epidemic, which was based on tracing and isolating clusters of infections.

There was a sense of exceptionalism: that the widespread use of masks, good standards of hygiene, and lack of physical contact was helping to contain the virus, and that the country could avoid the sort of dramatic lockdowns seen in other parts of the world.

But as the virus surged, and the cluster-based approach began to fail, the government was painfully slow to switch gears. Against a fast-moving virus, even a few days delay can be critical.

Koichi Nakano, a political science professor at Sophia University says the lack of testing created a lack of transparency, while policy was incoherent and lacked a sense of direction.

"The government is so much more focused on trying to provide lifelines to the corporate sector."

Shibuya says the government's expert panel lacked the wide range of talents that was needed, and excluded the sort of outspoken academics who might have raised the alarm earlier. Instead they have fallen in line behind a set of policies that suited the government and corporate sector's agenda.

Even so, the tide may finally be turning, with big businesses now moving in favor of firmer action to stem the virus.

"I think the government was worried about the impact on the economy and that probably made them waver," said Takahide Kiuchi, executive economist at Nomura Research Institute.

"But if you listen to big companies, they tend to be in favor of a state of emergency. They want to see conditions resolved sooner - even at the expense of immediate pain. It is small businesses who want Abe not to act so soon."

The Washington Post's Akiko Kashiwagi contributed to this report.