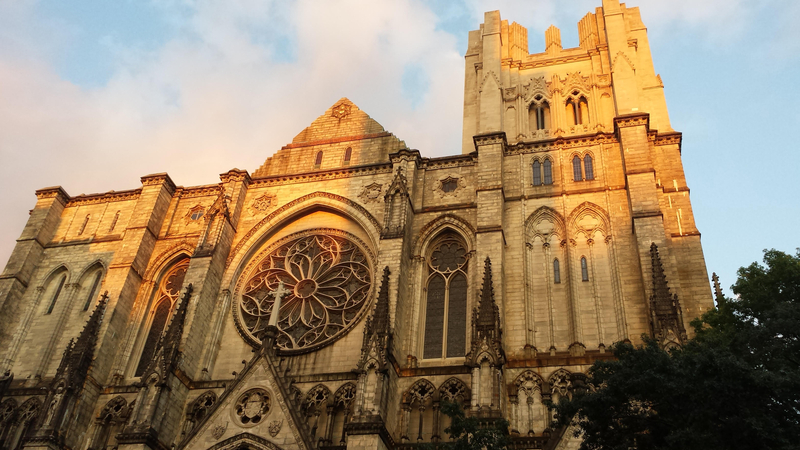 The Cathedral Church of St. John the Divine in Manhattan, one of the largest church buildings in the world, will partner with the Rev. Franklin Graham's ministry, Samaritan's Purse, to set up a field hospital under its 124-foot-high stone nave, Graham said Monday.

Graham, an evangelist who will travel to New York on Tuesday to visit the Episcopal church, said New York's Mount Sinai Hospital asked for his ministry's help with the effort. Tents expected to hold at least 200 patients will be set up inside the cathedral by the end of the week, the Rt. Rev. Clifton Daniel III, the dean of the cathedral, told the New York Times, which first reported the news.

Church officials told the Times that about 400 beds were delivered last week, though it's unclear whether patients will be treated specifically for the novel coronavirus.

Efforts to reach staff at the cathedral were not successful late Monday.

"In the history and tradition of the church, and following the example of Jesus, cathedrals have long served as places of refuge and healing in times of plague and community crisis," Daniel said in a statement to Episcopal News Service. Last week, the church tweeted that it planned to help the city with providing space for beds during this time.

As churches across the country are generally closed to the public, many pastors are trying to figure out how to use empty facilities that would normally be holding worship services and community events. The Washington National Cathedral in Washington, for example, is hoping to set up a blood bank for the Red Cross in the coming weeks, according to the cathedral's spokesman, Kevin Eckstrom.

In New York City on Monday, the number of coronavirus cases reached 68,766, including an estimated 15,333 patients who were hospitalized, and the death toll was 2,738, according to the Times.

St. John the Divine, which is located in the Morningside Heights neighborhood near Columbia University, serves as the seat of the Episcopal Diocese of New York and is a popular tourist destination, usually charging $10 per adult sightseer.

Graham said that Samaritan's Purse, which is one of the largest evangelical institutions in the country, was asked by FEMA, Homeland Security and the White House to take a team to New York to build a 14-tent, 68-bed respiratory care hospital in Central Park in late March. Then Mount Sinai asked if the ministry could help put the beds in the church, since St. John the Divine had the building, and Samaritan's Purse had the people, Graham said.

The partnership between Samaritan's Purse and a legacy institution with a reputation as the center for liberal causes is highly unusual. Even before they were accepted as Episcopal church clergy, the church gave its stone pulpit over to women and gay people, and it invited leaders of other religious traditions to preach.

For decades, Graham's comments about Islam and gay people have induced controversy, and raised red flags for some when his Samaritan's Purse came to New York. New York Mayor Bill de Blasio told reporters last week that his office would "monitor" the facility to ensure staff would not discriminate against anyone. Graham said that members of the mayor's office visited the facility on Sunday, adding that they were not concerned over issues of discrimination.

"Regardless of who comes in, we're going to do what we can to save them," Graham said. "This coronavirus is going to kill Democrats, Republicans, independents. It's going to kill gay people, straight people, African Americans, whites, Asians. It is not a respecter of persons."

Graham said that he didn't realize how serious the coronavirus was spreading until three weeks ago, when a member of his staff in North Carolina was diagnosed with the virus. The staff member had been returning from Africa and believes he picked it up when transferring in Dubai. Even though he tried to self-quarantine, Graham said, his wife picked it up and Graham saw how infectious the virus could be.

"That's when I realized this is a serious deal," he said. "It made a believer out of me."

Shortly after, Samaritan's Purse sent a team to Italy.

Graham was reluctant to attribute the virus to God's wrath, but he describe it as "part of the fallen world."

"We have worshiped other gods in this country, and those gods are sports or entertainment," he said. "You can't go to a basketball game and concerts. The people we've idolized are on the shelf. I think God is trying to get our attention. He wants us to worship him."

As it morphs into a hospital, the cathedral has had its own challenges in leading up to the recent crisis. Luxury apartments built next to St. John the Divine to provide a revenue stream caused controversy a few years ago. And one year ago, on Palm Sunday, a fire in the church's crypt forced its worshipers outside, just one day before the famed Notre Dame cathedral in Paris was overcome by flames.

Tags:
The Cathedral Church of St. John the Divine