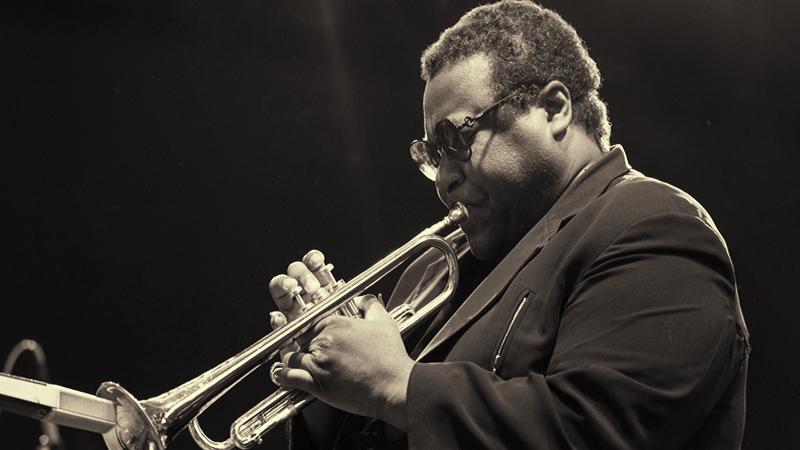 Wallace Roney, a Grammy-winning virtuoso of jazz trumpet who was mentored by Miles Davis and performed with him during one of Davis' final performances, died March 31 at a hospital in Paterson, New Jersey. He was 59.

His death from the coronavirus was confirmed by his publicist, Lydia Liebman.

Roney, who attended high school and college in the District of Columbia, first came to prominence in his early 20s, winning awards from Downbeat magazine in 1979 and 1980 as one of the best young trumpeters of his generation. He rapidly advanced to working with Art Blakey's Jazz Messengers and in a quintet led by Tony Williams, who had been Davis' drummer in the 1960s.

"He sits alone, silent and slim in a dark gray jacket, his right hand on his horn," James McBride wrote in a 1987 profile for The Washington Post. "His head is bowed slightly, giving him an edgy, pensive, shy look. Yet as he rises to walk toward the stage, moving like a shadow, the other horn players - trumpeters and saxmen lined against the wall waiting to blow - part respectfully to let him pass. They know who he is. They know what he can do."

Roney's greatest acclaim came from a public endorsement from Davis, who rarely fawned over other musicians.

The two trumpeters first met when Roney performed at a Davis tribute concert at Radio City Music Hall in 1983. Davis, impressed with Roney's playing, invited him to his Manhattan apartment the next day.

"A lot of people like to say, 'Yeah, well, I hung with Miles, but we never talked about music,' " Roney said in a 2016 interview with the Snapshots Foundation. "Well, guess what? I did. I loved him because of his music, and he talked to me about music all the time."

After embracing electronic music in the 1970s, Davis had rejected suggestions to perform the acoustic jazz of his earlier years. But in 1991, arranger Quincy Jones persuaded an ailing Davis to reprise his orchestral albums "Sketches of Spain" and "Porgy and Bess" at the Montreux Jazz Festival in Switzerland. Roney was asked to play Davis' solos during rehearsals.

At the concert itself, Davis insisted that his young disciple join him onstage. The two trumpeters stood side by side, trading phrases. Roney impressed critics with his mastery of the most demanding aspects of Davis' style.

For Roney, the comparisons with Davis proved both a blessing and a curse.

"I never get tired of the comparisons to Miles - I get tired of the critics trying to make it into a negative," he told writer Charles Latimer in December for the "I Dig Jazz" blog. "Because to me, it's no comparison. Miles Davis is the greatest ever. What I'm trying to do is continue and push forward from the lessons I learned from him and try to play this music."

As Roney's career advanced with more than 20 albums as a leader, he forged a path that moved away from strict jazz traditionalism, embracing electronics and influences from funk, hip-hop and world music.

The title track of his 2000 album, "No Room for Argument," featured sampled clips of speeches from Martin Luther King Jr. and Malcolm X. Another track, "Homage and Acknowledgment" which John Coltrane's "A Love Supreme" with Davis' "Filles de Kilimanjaro," borrowed the club music concept of a mash-up, where one piece of music is played simultaneously with another. His follow-up album, "Prototype" (2004) featured jazz versions of the title song by Andre 2000 of the hip-hop duo, Outkast, and Al Green's "Let's Stay Together."

"What makes Mr. Roney most interesting at the moment," New York Times critic Stanley Crouch wrote in 2000, "is the way in which he is working with his band, trying to define an ensemble approach in which each player can remake his or her part in reaction to what the featured performer is doing. Mr. Roney's music embodies the essence of jazz, both taking advantage of and building on the past."

Wallace Roney III was born May 25, 1960, in Philadelphia. His father, a U.S. marshal, was a jazz fan who revered Davis and pushed his son to begin trumpet lessons at age 5. He took lessons from Sigmund Hering of the Philadelphia Orchestra, and by age 12 he was a member of a classical brass quintet. He was also tutored by jazz great Clark Terry.

After his parents divorced, Roney moved with his father to Washington, where he attended the Duke Ellington School of the Arts. Roney turned down an offer to attend the Juilliard School of Music in favor of Howard University and later studied at the Berklee College of Music in Boston.

In 1979, he toured with South African pianist Abdullah Ibrahim and then joined a big band version of Blakey's Jazz Messengers, where he played second trumpet behind Wynton Marsalis on a European tour. Two years later, while attending Berklee, he received news that Marsalis was leaving the Jazz Messengers.

Keenly aware that trumpeters would be flocking to Blakey's door, Roney funded a trip to New York by selling everything he had - including his trumpet. He passed the audition with Blakey using a horn that a friend had been using as a flowerpot.

"I took the horn, took the flowers out the bell and blew it," Roney told The Washington Post in 1987. "It was pretty beat up."

In 1983, while taking part in a Davis tribute in Manhattan, he met his hero for the first time.

"He asked me what kind of trumpet I had," Roney told Time magazine, "and I told him none. So he gave me one of his."

Roney was brutally honest when asked to offer advice to younger musicians.