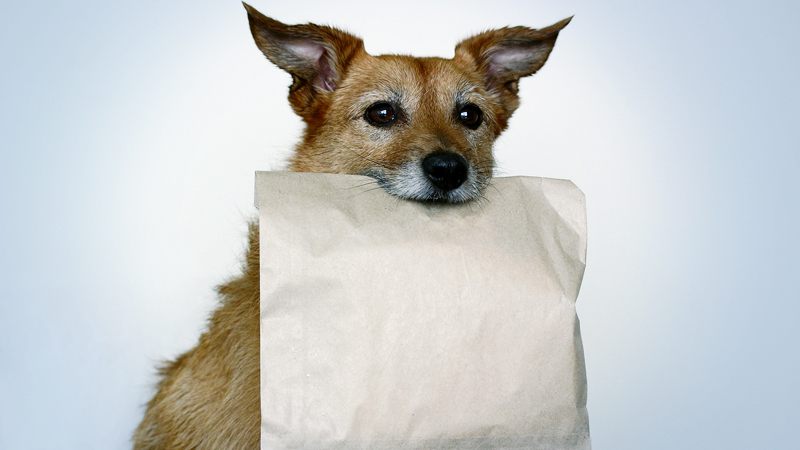 The 11-year-old brindle boxer trotted out of the winery, bottles tucked into each pocket of his harness-like vest.

Outside in the parking lot, a white Hyundai SUV was waiting. Its driver crouched down on the pavement, coaxing the dog to come closer. When the furry delivery boy reached the passenger-side door, the customer bent over and collected her purchase from his pack.

While plenty of businesses are turning to curbside pickup or contactless delivery, Stone House Urban Winery may be the first to enlist a dog to help with social distancing. In mid-March, as fears about the novel coronavirus intensified, the Hagerstown, Maryland, winery invited its customers to place orders by phone. Soda Pup (Soda for short) would handle the deliveries.

"Before this all happened, we had so many customers who came to see Soda. They'd grab a glass of wine, sit on the floor with him, some would take him outside. They love Soda Pup," co-owner Lori Yata told the Herald-Mail. "Being a small business, we are trying to keep ourselves afloat. So we decided to use a little bit of enticement to get people in."

Elsewhere, dogs are helping to deliver groceries to senior citizens, enlivening their days during a period of dreary self-quarantine. And though fears persist that even petting a dog could be enough to transmit the virus, experts say interacting with household pets doesn't pose much of a risk. While one likely case of human-to-dog transmission was reported in Hong Kong last month, there isn't evidence that dogs can transmit the virus to humans through droplets, The Washington Post's Karin Brulliard reported.

Public health experts advise anyone infected with the coronavirus to stay away from animals just to be safe, but the American Veterinary Medical Association says healthy people can go ahead and pet dogs, including those that are bringing them wine. (Washing hands afterward, however, is recommended.)

In Hagerstown, Yata outfitted the 75-pound boxer with saddlebags that resemble those typically used by horses, and prayed that he wouldn't see a bird and take off running. Though Soda appeared a little hesitant when he approached his first curbside customer, the winery reported on March 21 that he was "actually getting quite good..... as long as there are no bunnies or geese, or other critters to distract him."

The contactless delivery system has its limitations: Soda can carry only two bottles of wine at a time, so anyone wishing to purchase a whole case will have to wait for an actual human to bring it out. But at a time when many small businesses are struggling and the winery has had to close its tasting room, the novel prospect of getting wine delivered by a dog has attracted visitors from all over the region.

"We've had people call in just specifically to have Soda Pup bring wine out to them, people who have never even been here before," Yata told WJLA.

The serious-looking boxer isn't the only dog being put to work amid the global pandemic. In Manitou Springs, Colorado, an extremely polite golden retriever has been delivering meals and groceries to a 71-year-old neighbor, CNN reported.

Renee Hellman, who suffers from heart problems and chronic obstructive pulmonary disease, isn't supposed to leave her house because she could be particularly vulnerable to the virus. When she began self-quarantining about three weeks ago, her neighbor Karen Eveleth started shopping for her.

Before long, Eveleth came up with an idea. Her dog, Sundance (Sunny for short), was already unusually helpful and had learned to pick up mail and deliver it to his owner. So Eveleth trained the retriever to carry carefully wrapped bags of food in his mouth, sending everything from eight-pound chickens to sacks of flour over to her neighbor's house. For each good deed, he received a piece of duck jerky.

"Every day we send something back and forth. He's just happy to do his job," Hellman told CNN.

Local reporters from KKTV captured footage of the energetic golden retriever bounding between the two neighbors' homes, a plastic takeout bag dangling from his jaws. Upon arriving at Hellman's doorstep, he barked to announce his presence and was rewarded with pats.

Of course, from a purely practical perspective, Eveleth could simply drop the food at her neighbor's door while still maintaining social distancing. But having a dog courier has been "a real treat" at a stressful and uncertain time, Hellman told KKTV. "Little things like Sunny coming over to visit is nice, and it makes you feel good."

Some senior citizens in northern Maine have been similarly delighted to get their groceries delivered by a team of sled dogs. In mid-March, Hannah Lucas, who works at a Circle K convenience store when she's not mushing, noticed that elderly residents were coming in to purchase small items such as milk, eggs and fruit despite the considerable risks.

"I'm out on the trails everyday with my dog teams, so I figured that I would just pick up these groceries for them and save them the trip," she told USA Today. "A couple of times we've picked up prescriptions for people at Walgreens."

Using snowmobile trails to traverse the backwoods, Lucas began enlisting her pack of Siberian huskies to conduct four to six deliveries a day in the rural northern reaches of Aroostook County. She told Maine Public Radio that she drops off the goods at trail entrances near people's homes, then waits at a safe distance while they check their orders.

Theoretically, of course, she could just deliver the supplies by car. But pulling a sled laden with groceries has proved to be a good workout for the dogs, and people are always happy to see them. In fact, delivery via dog sled has proved so popular that Lucas is collecting donations so that she can do the same thing next winter, instead of trying to find sponsors for her team.

"My dogs are the real heroes and I'm so proud of them!!" she wrote.