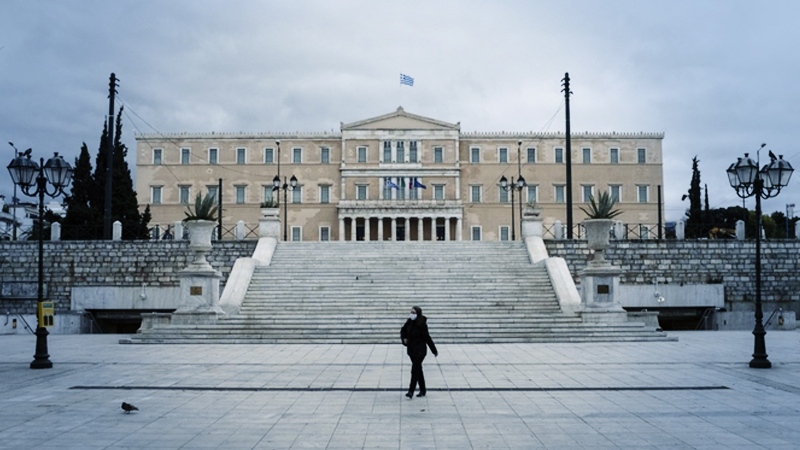 A woman wearing a protective face mask walks at deserted Syntagma square in Athens on April 7, 2020. MUST CREDIT: Bloomberg photo by Yorgos Karahalis

Europe's fiscal stalemate over a joint economic response to the coronavirus suggests its finance chiefs are still struggling to learn the lessons of the region's all-too-recent Greek crisis.

The danger that being too timid to borrow now risks a bigger burden in the future was a parable of policy first absorbed during the Greek turmoil of the past decade. Back then, severe austerity inflicted by creditors proved ultimately self-defeating by worsening an economic crisis that added to the country's debts.

While European finance chiefs agree this time that southern countries such as Italy and Spain can add to their borrowings, they failed to unite on a strategy to help them further after 16 hours of talks that ended in the early hours of Wednesday. In the meantime, economists and investors are warning that any lingering fear over adding to debts to bolster growth could open the door for history to repeat itself.

"Massive deficits now are essential to get economies through the next few months, without it turning into a depression," said Luke Hickmore, a money manager at Aberdeen Standard Investments. "We are all going to have to get used to larger fiscal deficits and debt as a proportion of GDP for the next five years, maybe 10."

That's reflected in the region's bond markets, where Italy rather than Greece is now the problem child. The country's yield premium over Germany soared last month to highs last seen in 2018 amid fears that its spiraling borrowings could force rating agencies to cut the nation's credit worthiness to junk, threatening another sovereign debt crisis.

European finance ministers remain in a stalemate over how to pay for the economic response to the virus. A marathon teleconference lasting through the night ended inconclusively after France and suffering southern countries faced off against northern neighbors over the prospect of issuing joint debt.

The initial reaction before then showed that Europe had taken on some lessons from the aftermath of the financial crisis, particularly in Greece. Overzealous budget cuts required there by creditors in 2010 harmed growth, an approach pushed by the International Monetary Fund that it subsequently admitted was flawed.

The U.K., which also endured tough austerity to consolidate debts after the financial crisis, may have found itself subject to the same phenomenon. Berenberg economist Holger Schmieding, in a note this week, attributed the country's slower pickup from the 2008 crisis, as compared to the U.S., Germany and France, to premature fiscal tightening.

Some European governments aren't taking chances, happily setting aside long-standing euro-zone rules intended to foster fiscal discipline, in order to address the emergency. Germany has rolled out a 750 billion-euro ($816 billion) package, while France initially budgeted 300 billion euros in state loan guarantees and 45 billion euros for a package of emergency measures.

Supporting the efforts of governments is the European Central Bank, which plans to spend more than 1.1 trillion euros on purchase programs this year. That may help contain borrowing costs of weaker members such as Italy by sucking up their debt.

Still, in Spain - a hot spot of the pandemic - the current stimulus of 17 billion euros isn't enough, according to economist Maeva Cousin at Bloomberg Economics. She warns that the country risks a debt spiral if it doesn't spend enough on bolstering its economy now.

"Paradoxically, the main danger for Spain's public finances is that too little is spent, not too much," Cousin said. "The more it spends now the more it will save in the future."

Italy, also badly affected by the virus, has passed a stimulus worth 25 billion euros, and plans to at least double that in a subsequent package. It has also pledged to back loans to businesses for a total of more than 750 billion euros.

But Italy's predicament is a particular worry. The country's extra spending could push its debt-to-gross domestic product ratio above 160%, according to Goldman Sachs, making its fiscal sustainability more finely balanced. That ratio could also reach 120% in France and Spain, it reckons.

European Union economy chief Paolo Gentiloni told finance ministers during Tuesday night's call that he expects the bloc's output to contract by between 5% and 10% this year, depending on the length of lockdowns, according to two officials familiar with the matter. That would make the slump deeper than the Great Recession of 2008-09, and the steepest in living memory.

Yield spreads across the region, a key gauge of investor appetite for debt of riskier nations, already jumped last month before the ECB intervened, and the impasse between finance ministers provoked another surge on Wednesday, when Italian 10-year yields rose as much as 18 basis points to 1.80%.

"ECB and some kind of mutual support for Italy is crucial," said Chris Iggo, chief investment officer of core investments at Axa Investment Managers. "Without that, I can't see it remaining investment grade, or even Italy staying in the euro area over the longer term."

Olivier Blanchard, the former IMF chief economist who spearheaded the crisis-era rethink of the fund's approach to fiscal matters, said Monday that if concerns about Italy's debt sustainability are valid, "then the ECB is a Band-Aid, not a solution."

Hence the renewed push for euro area countries to jointly issue debt, also known as "coronabonds." That would give weaker member states a backstop to spend as much as needed. But the idea has been resisted by countries such as Germany and the Netherlands, which entered the crisis with low debt levels.

"We need a bold political signal, if only to deal with the upcoming new spending and debt in the future," said Frederik Ducrozet at Banque Pictet & Cie in Geneva.