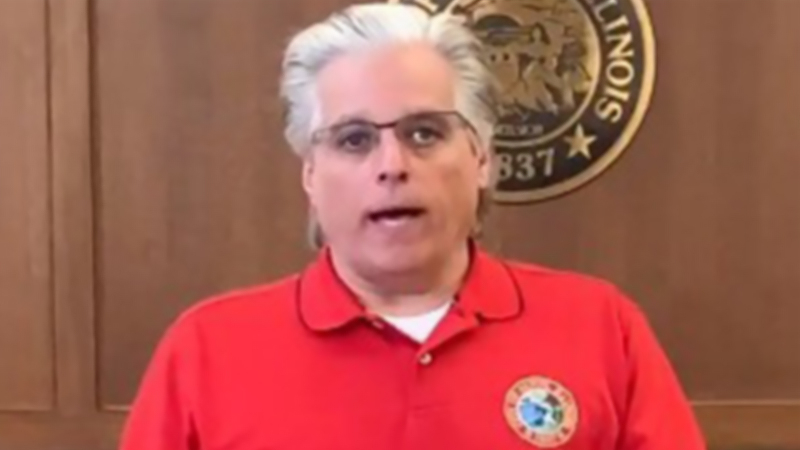 Walker apologized for his wife's 'stunning lack of judgement'Credit: Facebook

In the heart of downtown Alton, Illinois, in a tavern right off the Mississippi River, an illicit party was rumbling into the early morning hours of Sunday.

Complaints from residents had poured in over the past week that Hiram's Tavern had been operating on weekends despite Illinois Gov. J.B. Pritzker's, D, stay-at-home executive order, the Alton Police Department said.

So on Friday, April 3, Alton Mayor Brant Walker ordered police to start issuing citations to anyone refusing to comply with Pritzker's order, telling residents he was "begging" them to stay home.

The police duly complied. Then, around 1 a.m. Sunday, the mayor's phone rang, as Walker recounted Monday.

It was the police, and they told him they had busted Hiram's Tavern. The other thing? His wife was inside.

On Monday, Walker apologized to the city in a statement and said he was "embarrassed" after his wife, Shannon, was among several people inside the bar cited for reckless conduct, a misdemeanor, just as he was trying to crack down on social distancing. He said he told the police officers at the scene to "ensure that she received no special treatment."

Police said the partyers were "clearly disregarding the executive order and public pleas for compliance."

"My wife is an adult capable of making her own decisions, and in this instance she exhibited a stunning lack of judgement," the mayor said in the statement. "She now faces the same consequences for her ill-advised decision as the other individuals who chose to violate the 'Stay At Home' order during this incident."

The mayor did not immediately respond to a request for additional comment, and his wife could also not be reached.

Illinois was one of the earliest states to shut bars and restaurants except for takeout, on March 16. The state ordered residents to stay at home, except for essential trips, starting on March 21.

Statewide, Illinois has reported more than 13,500 confirmed cases of covid-19 and 380 deaths, according to data from the Illinois Department of Public Health. On Tuesday, Madison County, where Alton is based, recorded its first death and has at least 63 other cases. The county is just across the river from St. Louis.

"If members of our community will not protect each other, and will be so brazen as to gather in public places, we will be forced to take action like we did this weekend without hesitation," Alton Police Chief Jason Simmons said in a statement.

Police departments nationwide have been cracking down on bars and parties flouting social distancing orders. Busts have included a "coronavirus party" in Kentucky, after which at least one attendee tested positive for covid-19. Police in New Jersey said they broke up another "corona party" inside a 550-square-foot apartment, packed with roughly 50 people and a DJ. Over the weekend, also in New Jersey, police had to break up an unruly crowd that gathered to watch a Pink Floyd cover band on a man's front lawn.

The police told the group of about 30 adults, "We wish you weren't here."