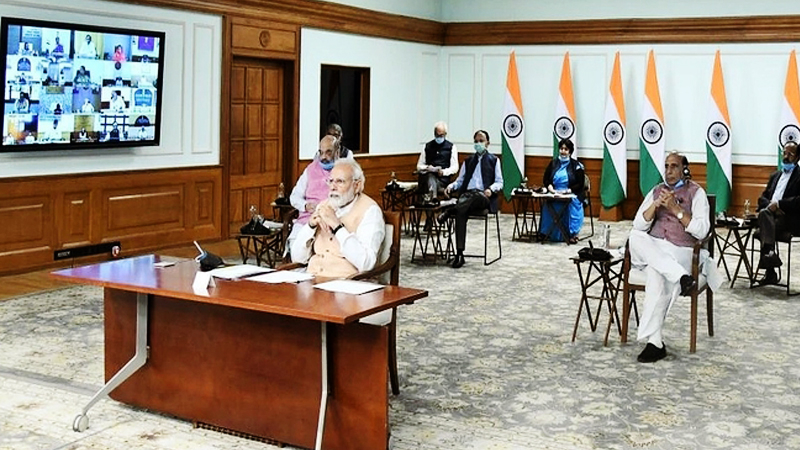 Chairing the first all-party meet since the 21-day lockdown was announced on March 24, PM Modi said he would consult with Chief Ministers on the matter.

Prime Minister Narendra Modi, in a major development, on Wednesday announced that by all accounts, it will not be possible to end the lockdown on April 14 as the number of Coronavirus cases continue to surge in the country.

Chairing the first all-party meet since the 21-day lockdown was announced on March 24, PM Modi said he would consult with Chief Ministers on the matter.

According to a report in NDTV, he said life will not be the same again after COVID-19 and that there would be “pre-corona and post-corona”.

He further told the political leaders that “massive behavioural, social and personal changes will have to take place.”

In his meeting via conferencing with floor leaders of parties with five or more MPs, PM Modi said the entire world is currently facing the grave challenge of COVID-19, adding that the present situation is an era-changing event in mankind’s history. “We must evolve to counter impact.” he said.

He also praised the efforts of states working together with the Centre in fight against the pandemic.

The situation in the country is akin to a ‘social emergency’, the PM said, which has necessitated tough decisions and “we must continue to remain vigilant”. He added that states, district administrations and experts have suggested extension of lockdown to contain the spread of the virus.

Speculations have been rife that the lockdown might be extended in view of the developing situation in the country due to Coronavirus.

However, a proper answer to the burning question is most likely to be delivered only after April 11 when the Prime Minister will hold a second meeting with the chief ministers.

The current shutdown is slated to end on April 14.

While Cabinet Secretary Rajeev Gauba had a week ago denied that there were any plans to extend the lockdown, several states have written to the Centre saying that the restrictions must continue.

Yesterday, government sources had said that the Centre is mulling requests by state governments and experts to extend the lockdown.

The speculations about the lockdown can’t be waived as a meeting between the Group of Ministers (GOM) was hosted by the Union Minister Rajnath Singh on Tuesday during which there was no decision taken on whether to end the lockdown on April 14 or to extend it.

On Monday, at a cabinet meeting, Prime Minister Narendra Modi had said people must be prepared for a long haul. He had urged the ministers to come up with a ‘graded plan’.

Today’s meeting was held to discuss the strategy to fight COVID-19 pandemic including the lockdown, economic impact of the shutdown and how to deal with it.

The virtual all-party meet comes as India’s Coronavirus cases on Wednesday crossed the 5000-mark with the total infections rising to 5,194 including 149 deaths.

Meanwhile, the Uttar Pradesh government has decided to completely seal hotspots identified in 15 districts from midnight till April 13 to curb the spread of coronavirus.