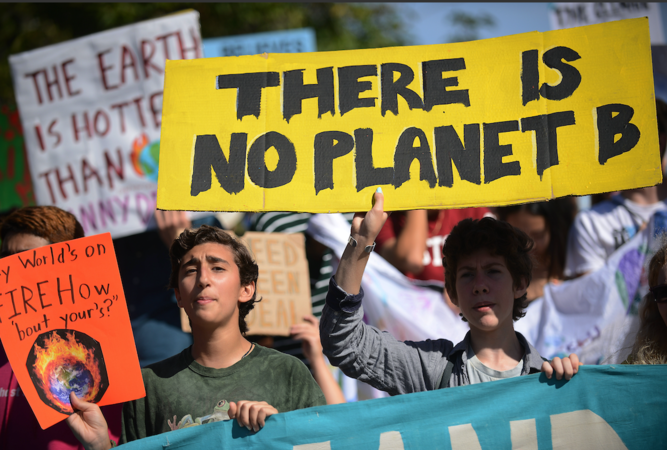 Students hold a climate strike in September 2019 in the District of Columbia. The virus shutdown has forced teenage activists to rethink their strategies of protest. MUST CREDIT: Photo by Astrid Riecken for The Washington Post

It was supposed to be the spring that launched Sophia Kianni's climate career. She had eight speaking engagements lined up at big-name universities - Stanford, Princeton, Duke. She had a 35-minute presentation prepared, explaining how concern for family in polluted Iran inspired her climate activism. She even had outfits: a favorite was the knee-length white skirt, paired with a green sweater and matching white blazer.

Then came the virus.

"Within a week, basically every single thing I had planned for got canceled," said Kianni, 18. That included a speech at a Smithsonian museum in the District of Columbia, a roughly 30-minute drive from her home in McLean, Virginia.

But it poses particular challenges for teen climate activists, who built a movement around the act of skipping school on Fridays and parading through streets in a highly visible show of rage.

"Usually, climate activism for me, would be to go out and act what I think," said Erik Christiansson, 15, who has organized marches in his hometown Soest, in the Netherlands. "Now we can't go out together, and even if we did, no one would see it."

Everyone Christiansson knows is obeying "stay-at-home" orders adopted by cities, states and nations across the globe. Some advocates have left the movement altogether, forced to prioritize family, health or financial concerns.

"It felt," Kianni said, "like our movement was being taken away."

Thai Jones, a lecturer at Columbia University who studies radical social movements, has searched for a historical parallel, some tidbit from the past that could help explain the current moment.

He has come up empty.

"There's really never been a situation like this, where everyone suddenly finds themselves isolated," Jones said. He noted that activists and movements "have had to adjust on the fly" before.

Zhan, 16, attends River Hill High School in Clarksville, Maryland. She started pondering how to shift the climate movement online more than a year ago, when she wanted to participate in the Friday strikes but feared retribution from her school.

She connected with another student, George Zhang, whose school in California has similarly harsh rules about unexcused absences. Last year, they launched a virtual strike for students unable or unwilling to skip class. "#DigitalStrike," she and Zhang called it. They asked participants to post pictures with climate slogans ahead of class on Fridays. Each week, she and Zhang combined all of the photos into a collage.

They started out with 10 or 12 digital strikers. By the time the virus struck, they'd built a faithful following of 100.

Last week, more than 3,000 people took part - a boom fueled by a recent tweet from celebrity activist Greta Thunberg, who urged her fans to join the "#DigitalStrike."

"I do feel sometimes like it's a miracle coincidence," Zhan said. "Not corona itself, but the timing and the growth: This hit us right when we needed it."

The #DigitalStrike team has now expanded from a handful of Americans to 50 students across the globe, and they're beginning to pursue more ambitious projects.

"There are so many digital tools we are discovering," Zhan said.

Christiansson, in the Netherlands, recently joined Zhan's team. But he's also pursuing another project: With a group called Fridays for Future, he is producing YouTube "webinars" about climate change and the pandemic. A recent episode featured Naomi Klein, a liberal activist and author of "This Changes Everything: Capitalism vs. the Climate."

Before the virus, Christiansson said, he spent roughly five hours a week on climate advocacy, working with local teens to plot a "chalking action" outside a nearby town hall or a "die-in" at one of the biggest railway stations in the Netherlands.

Now, he puts in five hours a day. After zipping through homework in the morning, he plants himself behind a two-screen setup in his bedroom. He fires up Slack, dials into Zoom and speaks instantly to high schoolers in Sweden, Scotland, Portugal.

"It's not a good thing that this virus is happening," Christiansson said, "but it has helped make more international connection."

Almost the moment Ela Gokcigdem learned school was out, she retreated to her bedroom. In the weeks since, she has spent every waking hour - from when she rises at 6 a.m. to when she falls asleep, usually around 2 a.m. - finalizing an environmental literacy course for high schoolers.

Gokcigdem, 18, dreamed up the class months ago, inspired by what she learned in AP Environmental Science. After some convincing, her principal at Wakefield High School in Arlington, Virginia, agreed to offer the course to students this fall. Gokcigdem was also in talks with Arlington Public Schools about offering her class districtwide.

But in the months before the virus hit, she'd fallen behind schedule. She had taken to showing up to Wakefield at 5:30 a.m., fueled by a large iced tea from Best Buns, to squeeze in extra work before school. Still, when the schools closed, she had only completed the introduction and the first two chapters. She had at least 16 chapters to go.

"This course," Gokcigdem said, "is what's getting me through this quarantine."

When she is drafting chapters, or coding the online presentation, she doesn't have time to feel scared. She doesn't even have time to get dressed: Gokcigdem said she hasn't changed out of her pajamas in a month.

Clad in her beloved Post Malone sweatshirt (and often listening to his music), she taps away at her iMac, whose screen is littered with blue sticky notes spelling out lesson plans: "Privatization of nature - who does it belong to?" reads one, adjacent to "Planet over profit." Her only breaks are trips downstairs for food: plant-based bacon, banana milk, anything involving avocados.

Twenty-eight days since being sent home, she just wrapped up Chapter 18. She's still deciding whether to add a 19th.

"My mom is a little worried," Gokcigdem said. "She says she sees me less than if I was at school."

Kianni, in McLean, Virginia, quickly got over the nixed lectures. Her new project is a website that will offer basic information about climate change in "every single language," she said.

Her inspiration came from years spent translating English-language articles on global warming into Farsi for her Iranian relatives. Almost no media outlets in Iran write about the issue, Kianni said, so her family was skeptical.

Eventually, her efforts paid off, she said. Her grandmother, aunts and uncles cut their electricity usage, began using cars less often and even agreed to reduce their meat intake.

"That," Kianni said, "was a really big deal for them."

She hopes the site can help replicate her success for families worldwide. But until a few weeks ago, Kianni said, it was just a vague idea, something she planned to give more attention after graduating this spring from Thomas Jefferson High School for Science and Technology in Alexandria, Virginia.

Now, Kianni is on track to launch the page this month. She's calling it "Climate Cardinals," named for the state bird of Virginia, and because she hopes its information will migrate across the globe.

"It feels like I have to be using this time productively," Kianni said. "It's such a terrible way to have this time given to me, so I might as well be the light in a dark situation."

Whenever she gets discouraged or tired, pulling long hours in her bedroom, Kianni turns to the photo she keeps on her desk. Her grandmother in Iran smiles back.