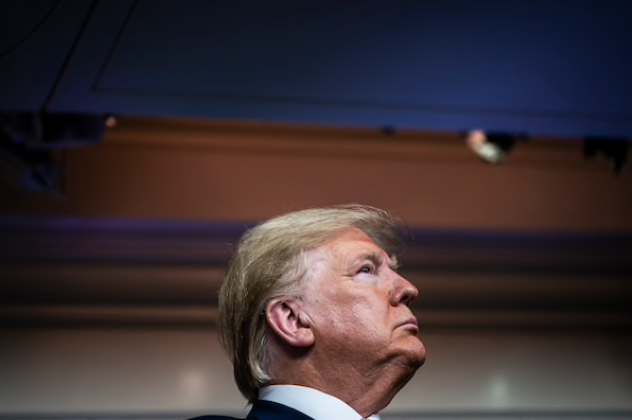 The campaign rallies are on hold, for now. So are the traditional campaign fundraisers, with wealthy contributors getting a photograph with the candidate and a few canapés in exchange for huge donations. The volunteers who expected to be knocking on doors or registering voters are, like their candidates, stuck inside, working the phones.

Some of that could change in the 204 days between now and the November election. But this campaign is frozen, in some ways, with everything from the expected presidential debate to the way voters will cast ballots in November to be determined later.

As it gets underway, and as we cover the ways each campaign adapts to the new reality, it's worth stepping back to assess where each campaign starts the general election.

We know that President Donald Trump started with a cash advantage over Joe Biden, and that the DNC started out far behind the RNC. (The latest fundraising and spending numbers will come out this week.) We know that some of the factors that hurt Trump in 2016, such as Republican disunity, have faded, while some of the factors that helped him, such as anger at Hillary Clinton, have disappeared. And we've seen the tactics deployed by Republicans against Biden and by Democrats against Trump to shape the political narrative of the coronavirus; Republicans argue that Biden is too naive about China, while Democrats point to the weeks when the president confidently predicted his travel restrictions on China would prevent the stateside arrival of the virus.

Here's what else we know:

Today's RCP average puts Biden 5.9 points ahead of Trump, and the Democrat has led in every head-to-head poll pitting him against the president since the primaries began last year. He also locked up the nomination earlier than any non-incumbent since 2004; that could be showing up in this most recent wave of polling. (Four years ago, Clinton's lead was largely gone by the time Sen. Bernie Sanders, I-Vt., conceded the primary.)

But neither the president nor Biden starts out as unpopular as the party's nominees were in 2016. Clinton became the presumptive nominee on June 6, 2016, and her net unfavorable rating on that day was 18 points. Trump had become the presumptive Republican nominee one month earlier, when then-Ohio Gov. John Kasich ended his campaign. At that time, Trump's unfavorability rating was at 23 points.

That deep unpopularity ended up helping Trump, with the Republican winning the voters who disliked both nominees. But voters are less disgruntled now. Today's RCP average finds an eight-point unfavorable rating for Trump, while voters are just as likely to view Biden favorably as to view him unfavorably. That's a dip from the start of this campaign, but it's far better than the position Romney started in eight years ago. When Rick Santorum quit that year's primary, paving the way for Romney to win, the Republican was 10 points underwater.

Biden benefited immensely from a primary campaign that ended without serious negative advertising from fellow Democrats. But Biden has already been roughed up by ads from the Trump campaign and by Republicans with well-funded outside campaigns, such as Sen. Rick Scott of Florida and Sen. Tom Cotton of Arkansas, focusing on Biden's son Hunter and his business deals. But that story has not stuck to Biden, or reshaped voters' impressions, as the controversy over Clinton's email server hurt her campaign.

In the six months after the initial email revelation, Clinton's unfavorable rating spiked from one point to 11 points, and a majority of voters would tell pollsters that the eventual nominee was not "honest and trustworthy." Biden's favorable numbers have been flat since the Hunter Biden investigations began in September, as have his "honest and trustworthy" numbers.

Third-party candidates may matter less than they did last time

Thanks in large part to Trump's and Clinton's low favorable numbers, the 2016 election saw the most robust third-party and write-in voting of any election in 20 years. In 2016, a total of 14 states went to either Trump or Clinton without either candidate hitting 50% of the vote; not since 1996, when Ross Perot made a second third-party run for president, had so much of the electoral vote been decided by a plurality.

No Perot-like figure has emerged in this election, and we're unlikely to see one, both because of timing and because of the comfort that would-be independent candidates Mike Bloomberg and Howard Schultz feel about Joe Biden. (Mark Cuban has refused to rule out a run but has taken no serious steps.) Minor parties are in rough shape, too, with neither the Green Party nor the Libertarian Party attracting the kind of candidates it nominated four years ago.

From 2008 to 2016, the Libertarian Party picked standard-bearers with the same résumé: They had won elections as Republicans, then quit the party in disgust. Neither Bob Barr or Gary Johnson came close to winning, but Johnson won 4.5 million votes in 2016, the party's best performance ever. The Green Party, which nominated Massachusetts activist Jill Stein in 2012 and 2016, increased its vote to 1.5 million, its best performance since 2000. And 2.3 million voters picked another party, wrote in another candidate or supported independent conservative challenger Evan McMullin.

That's nearly 8.3 million votes that didn't go to Clinton or Trump, and it will be a challenge for a third party to capture them again. Their first problem has been in finding compelling candidates. Until this month, former Rhode Island governor Lincoln Chafee had been seeking the Libertarian nomination, promising it at least a little political star power. With his exit, the nomination is being contested by obscure party activists ahead of their late May convention. The Green Party does not pick a nominee until July, and New York labor activist Howie Hawkins, a perennial candidate for local and statewide office, is the heavy favorite.

Still, the Trump campaign has spent more time this cycle urging left-wing voters to find a reason to reject Biden. The president has frequently tweeted that the primary was in some way slanted against Sanders, recycling a tactic he used in 2016 to encourage Sanders voters to reject Clinton, whether or not they could bring themselves to vote for him.

Over the weekend, Donald Trump Jr. and Trump campaign manager Brad Parscale tweeted about a former Biden staffer's accusation that then-Sen. Biden had made an unwanted sexual advance on her in 1993. Neither of them discussed the accusation itself, which has not been independently corroborated and which the campaign has denied, instead saying falsely that the media, in Trump Jr.'s words, "works for the DNC" to protect Biden. The goal is to persuade a pack of liberal voters to become disgusted and reject Biden, but those voters may have less appealing third-party options than they did four years ago.

That could matter as much or more than what the campaigns themselves get up to. Every election is conducted under different rules in different states, from Minnesota's lengthy early-vote period to Pennsylvania's focus on in-person Election Day voting. Just a few states have replaced in-person voting with mail ballots; none of them are among the states expected to be closest in November.

There are months and months left to legislate and litigate this issue, which will touch everything from whether the U.S. Postal Service has the funds to continue its work to whether states with strict requirements on absentee voting will relax them.

There isn't much real disagreement about whether ramped-up mail voting is safe; the Republican National Committee has said so in mail to party members. But there is an ongoing effort by the president to warn that mail voting extended to people under 65 is dangerous; there is a thicket of state election laws that put high signature and witness standards on mail ballots; and there is not yet much reckoning over how long it could take for those ballots to be counted. In 2018, it took Arizona and California many days to determine who had actually won a key Senate race and key House races.

From week to week, there may not be many new developments in the Trump vs. Biden race. But there will be constant battles over how the vote itself is conducted. At the moment, how the ballots will be cast and counted is the biggest unresolved issue in an election in which the president is a slight underdog.