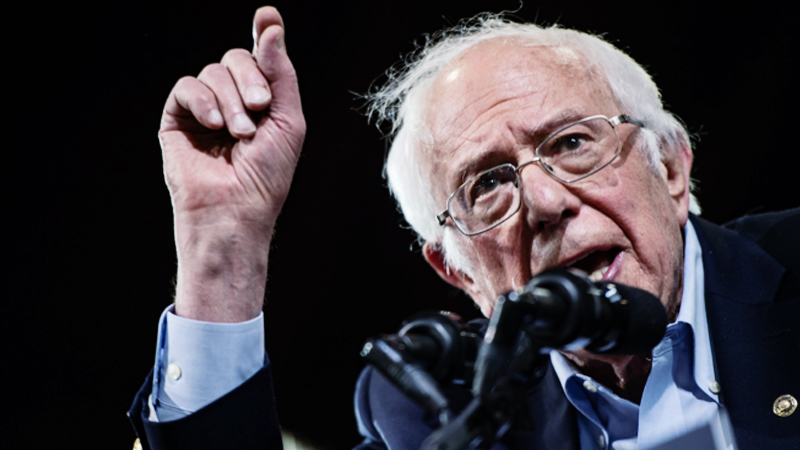 The carefully choreographed show of support was kept secret until Biden, a moderate, introduced the democratic socialist from Vermont during a live-streamed event billed as an address on the coronavirus crisis. It came five days after Sanders bowed out of the race - and much sooner than 2016, when it took Sanders weeks to get behind Hillary Clinton.

"We need you in the White House," Sanders told Biden, beaming in from his home in Burlington as Biden lowered his head in gratitude from a professionally lighted setup in his Delaware basement. "I will do all that I can to see that that happens, Joe."

The senator said staffers from both campaigns have been working together for weeks to create task forces that would address the economy, education, climate change, criminal justice issues, immigration and health care. He acknowledged that he disagrees with Biden on some of these fronts but said he looked forward to "bringing some great people" into the joint teams. Biden said the six groups would pursue "creative new ideas and proposals."

Sanders bestowed his stamp of approval at a crucial moment for Biden's candidacy. Even after Sanders ended his bid and praised Biden last week, many of his supporters, including some who had been on his campaign's payroll, continued to condemn Biden publicly. The hope among allies of the two men is that Monday's endorsement will quell those critics and allow Biden to forge stronger ties to the party's left flank.

"There are stages to grief, and people will move through those stages," said Waleed Shahid, the communications director for Justice Democrats, a liberal group that supported Sanders. He said that he was encouraged by the announcement, but that his group was not yet ready to throw its backing to Biden.

That reluctance underlined the work left to be done for Biden to win over Sanders' loyal supporters at a higher rate than Clinton did in 2016.

The online event was a testament to how dramatically - and suddenly - the coronavirus pandemic has reshaped the presidential primary campaign. Traditionally, candidates roll out marquee endorsements at big rallies, joining each other onstage to create lasting visual images of their partnerships.

But the spread of the virus has halted those kinds of gatherings, just as it has delayed voting in many states. So Biden, much as he has for the past few weeks, opened Monday's talk against a backdrop of bookshelves. Like a public-access TV host, Biden introduced Sanders as an "outspoken advocate" for important issues.

"Not in a million years would we have believed that we would be talking to each other in our respective homes," said Sanders. Biden chuckled and nodded in agreement.

The event ended up as something with no real precedent in recent campaign history. After the official endorsement, the two senators, one retired and the other still in office, engaged in a scripted back-and-forth that recalled Senate floor debates, when colleagues yield to each other for questions.

"Do you have any questions for me, Bernie, at all?" Biden asked at one point.

"I did, Joe," replied Sanders, before querying him on whether he backed a $15-an-hour minimum wage.

"Bernie, I am extremely supportive of that," Biden replied.

During a split-screen discussion, with Sanders hunched forward under harsher lighting, the two asked each other policy questions. They bantered about playing chess. The tone was friendly and highlighted the personal rapport they share - one not enjoyed by Sanders and Clinton.

They broached topics such as combating the impact of the pandemic, curbing student loan debt and remaking the economy to benefit the middle class, all of which appeared designed to appease Sanders supporters who may be skeptical of Biden's policy proposals.

Biden, who appeared to be reading from a teleprompter for much of the exchange, repeatedly praised Sanders. "Your endorsement means a great deal," he said, and he pledged a presidency that "goes down in history, with your help, Bernie, as one of the most progressive administrations since Roosevelt."

The Trump campaign cast the event as evidence that the Democratic Party has moved too far left. "This is further proof that even though Bernie Sanders won't be on the ballot in November, his issues will be. Biden had to adopt most of Bernie's agenda to be successful in the Democrat primaries," Trump campaign manager Brad Parscale said in a statement that exaggerated Biden's leftward movement.

Sanders' endorsement of Biden was not a surprise: Their teams had been in touch in recent days to work on "how we can best go forward together," Sanders said last week.

The independent senator from Vermont ended his presidential campaign Wednesday, telling supporters that he could not "in good conscience continue to mount a campaign that cannot win and which would interfere with the important work required of all of us in this difficult hour."

Sanders has said he will remain on primary ballots in an effort to collect enough delegates to influence the party's platform in negotiations this summer.

Anticipating the moment when it would need to make amends with the left, the Biden campaign recently formed an internal working group to lead outreach to liberal groups. The team includes Symone Sanders, a Biden senior adviser who worked for Bernie Sanders' 2016 campaign. "It's going to take all of us to beat Donald Trump in 2020. That's the lens that we view this through," she said Monday.

The task forces that Bernie Sanders announced Monday will include policy experts and leaders who represent diverse viewpoints, according to a Biden campaign official. The official said the campaign will disclose new information about the progress of their work in the weeks and months ahead.

While some activists have said the Biden campaign's outreach needs to be more robust, others have been more hostile, indicating that they are not prepared to back Biden - and may never be. They include two senior members of the Sanders campaign.

Among them is Briahna Joy Gray, who served as national press secretary. Over the past week, Gray has issued tweets speculating that Biden could be replaced on the ticket; she has accused Biden of having issues Sanders never raised, such as "a pattern of unwanted touching"; and she has labeled him a candidate with "very low enthusiasm ratings."

In his own tweet, David Sirota, who worked as a speechwriter for Sanders, has called for Biden to "stop sneering at disaffected progressive Dem voters." He defended his remarks Monday.

"I don't think that pushing Biden to be better in a constructive way, or even a critical way, is bad for the cause of beating Trump," Sirota said. "Joe Biden needs to be better and engage the base of the party, both because it's morally right on the policy merits and because it's necessary to win the election."

Asked whether Sanders agreed with the critiques from Sirota and Gray, Sanders campaign spokesman Mike Casca said they do not represent the senator's views or speak on his behalf. Gray did not respond to an email sent to her campaign account. On her Twitter profile, she calls herself a "Former National Press Secretary" for Sanders. Most Sanders staffers are remaining on the payroll through Tuesday, according to people with knowledge of the situation.

For much of his campaign, Sanders declined to publicly rebuke specific members of his campaign and the movement he led. Many of his supporters have said they feel compelled to speak their minds, and they often are disinclined to hew to the message of the official campaign or the candidate himself. The unpredictable nature of the movement shows the peril Biden faces in the months ahead, even with Sanders' support.

One area where Sanders could offer a major assist to Biden is online fundraising. Sanders maintains a massive email list, which he tapped to raise vast sums of cash in small increments during the campaign. Asked whether Sanders would lend his list, Casca declined to comment definitively on his plans.

Monday's event was a striking departure from the many contentious debates in which Biden and Sanders sparred. Those debates raised fears among some Democrats that the party would not be able to come together neatly against Trump.

"Joe, I know that there is an enormous responsibility on your shoulders right now, and it is imperative that all of us work together," Sanders said.

"I'm looking forward to working with you, pal," Biden told him later.