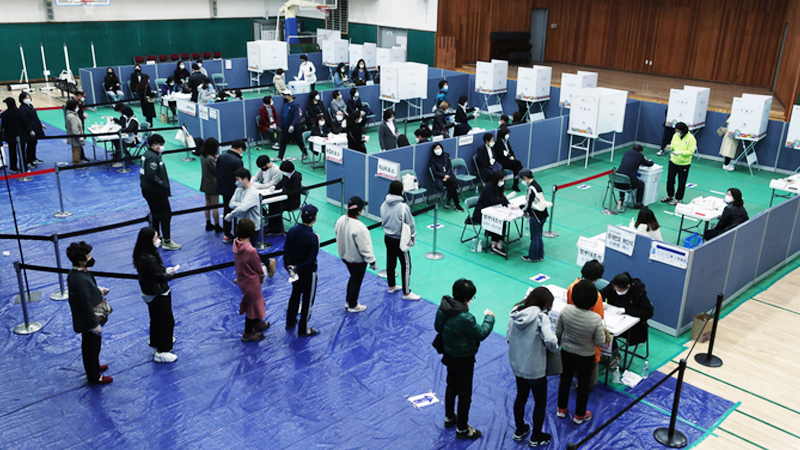 Voters line up at a polling station in Seoul on Wednesday. (Yonhap)

By Choi He-suk
The Korea Herald

Voter participation at 3 p.m. hints at highest turnout since 2004

Voters headed to polling stations Wednesday for the general elections, with the turnout projected to hit a record high in nearly two decades.

In this year’s general elections, 253 constituency and 47 proportional representative seats are being contested.

At the other end of the scale, Incheon recorded the lowest turnout at 53.3 percent followed by Gyeonggi Province with 54.2 percent. This year’s general elections saw record voter turnout with 26.69 percent of voters casting their ballots on Friday and Saturday.

With a relatively high turnout, it was projected that overall voter participation would exceed 60 percent, for the first time in general elections since 2004.

Results of exit polls conducted by the country’s three terrestrial broadcasters will be announced at 6:15 p.m.

The results of the elections were projected to begin to take shape from 2 a.m. Thursday for constituency seats, and from around 8 a.m. for proportional representative votes.

Due to the introduction of proportional representation parties in this year’s elections, the ballot for parties measures over 48 centimeters, making it impossible to be counted by a machine.

In addition to the proportional representative parties, Wednesday’s elections were also the first to see 18-year olds, who account for about 1.2 percent of all voters, cast their ballots.

Those in self-isolation due to the COVID-19 pandemic were also allowed to vote, provided that they showed no symptoms related to the disease.

According to the National Election Commission, 22.8 percent or 13,642 of 59,918 people in self-isolation applied to vote.

The self-isolated individuals were allowed to leave the place of isolation between 5:20 p.m. and 7 p.m. The temporary lifting of self-isolation was granted only for those located within 30 minutes -- by car or foot -- of polling stations.

As voters headed to polling stations, parties called for higher voter participation throughout the day.

“The central and local governments’ inundation, and attempts to hide North Korea’s series of provocations are government’s obvious election sabotage,” Kim Woo-suk, a spokesman for the main opposition’s election committee, said in a statement released earlier in the day, calling on voters to “save free Republic of Korea.” Kim Woo-suk was referring to various subsidies offered by the central and local governments in an effort to ease the economic impact of the pandemic, and North Korea’s military activities.

“Please vote in order to prevent politicians scorning the masters, and control the country as they will,” the statement said, referring to voters as the masters of the country.

While the party continued to rally support, its election committee chief Kim Chong-in appeared confident of the outcome.

“The number of seats cannot be predicted accurately but I don’t think there will be much difficulty in the United Future Party becoming the largest party,” Kim said after casting his ballot early in the day.

The ruling Democratic Party, for its part, continued to highlight the government’s response to the COVID-19 outbreak in an attempt to sway voters. With foreign governments and media praising Seoul’s response, President Moon Jae-in and the ruling bloc’s approval ratings have recovered in the wake of the pandemic.

“The general election decides the future of Korea, which is carrying out the most exemplary battle against the coronavirus and economic crisis,” Democratic Party Floor Leader Rep. Lee In-young.

“Coronavirus cannot win against Korea. Each vote will be the strongest weapon in the war against the virus.”