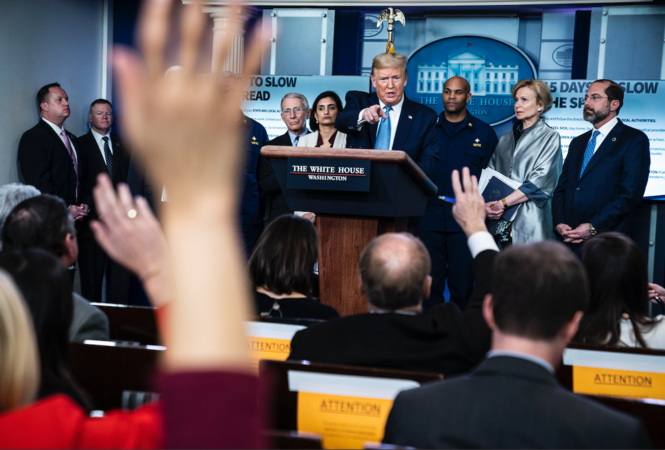 WASHINGTON - President Donald Trump's attempt to enlist corporate executives in a push to reopen parts of society amid the coronavirus pandemic got off to a rocky start Wednesday, with some business leaders complaining the effort was haphazard and warning that more testing needs to be in place before restrictions are lifted.

The president spent much of his day hosting conference calls with company executives, industry groups and others he announced Tuesday as part of a hastily formed outside advisory council devoted to the issue.

Advisers said the effort was aimed at building national momentum to reopen much of the country's economy by next month. Trump said guidelines for such an effort will be announced Thursday.

"Today, I spoke with the leaders of many of our nation's most renowned companies and organizations on how to achieve the full resurgence of the American economy," Trump told reporters at the daily coronavirus briefing in the Rose Garden on Wednesday evening. ". . . We want to get our country open again."

But across the business world, there was private unhappiness with how the White House handled the announcement of the advisory council - which it has dubbed its "Great American Economic Revival Industry Groups" - and others warned that Trump's goal of a May 1 reopening date for much of the country was unrealistic.

Many of the chief executives urged the White House to focus more on mass testing, according to several participants on the calls. Public health experts have argued that widespread testing is a key prerequisite to reopening the economy because it would determine who is infected and needs to be isolated, giving Americans greater confidence that they can safely return to work and public life.

Trump seemed to downplay the issue while speaking Wednesday in the Rose Garden.

"We have the best tests in the world," Trump said. "And we will be working very much with the governors of the states. We want them to do it. . . . The states are much better equipped to do it."

Some of the groups involved in the calls were notified in advance of Trump's announcement, while others heard their names for the first time during the Rose Garden event Tuesday night.

"We got a note about a conference call, like you'd get an invite to a Zoom thing, a few lines in an email, and that was it. Then our CEO heard his name in the Rose Garden? What the [expletive]?" said one prominent Washington lobbyist for a leading global corporation, who spoke on the condition of anonymity to discuss the sensitive matter. "My company is furious. How do you go from 'Join us on a call' to, 'Well, you're on our team?' "

Two White House officials defended Wednesday's calls, describing them as a chance for business leaders to share their ideas and provide the president with anecdotes and personal takes on the timeline for reopening the economy, "with some telling him it looks like May 1 for their companies and others saying June," according to one of the officials.

"It's feedback for both sides," the official continued. "It's all about staying on the same page as this all moves ahead."

But participants in the calls - which took place in four rounds and included representatives from more than a dozen industries, including banking, sports, agriculture and health care - painted a picture of a chaotic approach by the White House.

"Trump made it very clear he was ready to go on May 1," a person who was on one of the afternoon calls said. The person, who spoke on the condition of anonymity to describe the private call, added that Trump seemed to bask in the praise from CEOs, who repeatedly opened their comments with compliments for the president.

Public health experts - including several members of Trump's administration - have said in recent days that a target date of May 1 is not realistic. In addition to the issue of mass testing, experts have argued that because the virus has an estimated incubation period of up to 14 days, states should refrain from moving toward relaxing their restrictions until they have seen a sustained reduction in new cases for at least that long.

One member of a group that participated in the calls, the AFL-CIO, was told in advance of being named to the outside advisory council. But a spokeswoman for the AFL-CIO said its leader, Richard Trumka, was not asked - rather, Trump just announced that the coalition of labor unions would be a part of the council, she said.

In another example of the apparent disorganization, the White House misspelled the name of Lockheed Martin chief executive Marillyn Hewson in its news release announcing the members of the advisory council.

On one of the morning calls, the point most emphasized by the chief executives was the need for massive testing, which they said would be necessary to create the psychological circumstances for the nation to feel comfortable returning to offices, restaurants and recreation, according to a person familiar with the call.

The president - who acted as the emcee of the call - expressed his personal view that the economy will snap back quickly as soon as the country begins to reopen, citing what he described as pent-up demand. But some on the call were skeptical of such a robust economic reboot, predicting it may be steady, but slower.

Goldman Sachs chief executive David Solomon, a member of the newly announced group who was not on one of the White House calls because of a scheduling conflict, offered a cautious view on an earnings call Wednesday.

"Unless people feel safe and secure and confident around the virus, the economic impact will continue in some way, shape or form," Solomon said on the call, according to a transcript.

White House aides from the Office of Legislative Affairs also began sending letters Wednesday reaching out to Republicans and Democrats in Congress to serve on the sprawling advisory board. Those who have agreed to do so include Sen. Mark Warner, D-Va., aides said.

The letters were sent to Democrats who hail from swing states or districts and those who are members of the bipartisan Problem Solvers Caucus.

"The President has selected you to serve on a task force comprised of Senators and Members of the House of Representatives," White House aides wrote to lawmakers, according to a copy of the letter obtained by The Washington Post. "The purpose of the task force is to provide counsel to the President on the reopening of America in the wake of COVID-19. The formal name of this task force has not yet been announced. . . . Thank you for your service and your consideration of this opportunity."

As Trump mulls the matter of how and when to push for a return to normal business for the country, he is hearing from a chorus of right-wing voices who helped shaped his tax-cut plan during the 2016 campaign, with conservative economist Stephen Moore, Steve Forbes and supply-side advocate Arthur Laffer joining him by phone on Wednesday. Officials said Trump takes them seriously because he sees the GOP tax law they pushed as one of his signature agenda items.

Forbes has long argued that the Federal Reserve, not Congress, should be taking the lead and should increase lending to businesses, a point he reiterated on Wednesday. He also called for the Treasury Department to issue 100-year bonds. Laffer, meanwhile, called for a cut in payroll taxes, which are used to fund Social Security. Trump responded with encouragement but noted that Democrats are opposed.

The latest discussion among conservatives reflects the unease on the right as Trump embraces the latest stimulus program. The George W. Bush and Obama administrations took steps to prop up parts of the economy during the 2008 financial crisis, including injecting cash into the banking and automotive industries. Those measures would ultimately become controversial, leading to a populist backlash against government initiatives that appeared to pick winners and losers during a crisis.

Peter Navarro, the White House trade adviser who is coordinating efforts aimed at the nation's medical supply chain, has been another voice in the president's circle who has warned about prolonged pain for many Americans if the economic shutdown continues, urging action before problems like suicide become more prevalent.

"The choice over when to reopen the economy revolves in part around the necessity of balancing the lives that may be lost directly to the virus by opening too swiftly against the lives that will be indirectly lost from the severe economic shocks associated with opening too slowly," Navarro said in an interview.

Navarro has also been urging his colleagues this week to focus more on using this moment to change the direction of national trade and manufacturing policy, pushing not only to reopen parts of the economy but also to make that reopening linked to Trump's "America First" ethos, according to several officials.

Former House speaker Newt Gingrich, an informal Trump adviser, said Trump is guided by his instincts and his sense of what the American people want, balanced with the views of experts such as Anthony Fauci, director of the National Institute of Allergy and Infectious Diseases, and coronavirus response coordinator Deborah Birx.

"The fact is we're going to suffer casualties over the next month or two," Gingrich said. "To do something that's totally unacceptable to Dr. Fauci or Dr. Birx would be one thing, but he's not going to do that. He's going to be steady and let the governors be the implementers."