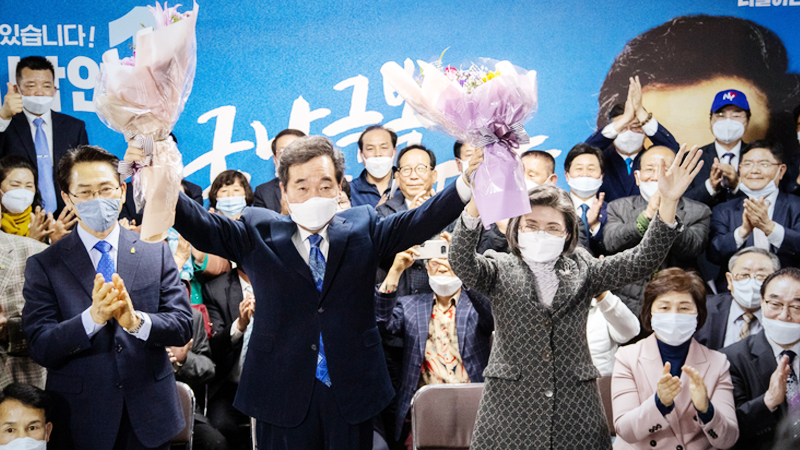 Former Prime Minister Lee Nak-yon, a candidate of the ruling Democratic Party in the general elections, holds up a boquet after he was certain to secure victory in the Jongno constituency in Seoul on Wednesday. (Yonhap)

South Korean voters were seen giving President Moon Jae-in’s party control of the parliament in an election that took place amid a pandemic. Voter turnout was projected to rise to its highest level in 28 years.

Early counts and exit poll results suggested dominance of the ruling Democratic Party on the back of the successfully flattening of the coronavirus curve, in comparison to other countries struggling with mounting death tolls.

“There was something like expectation that if we work hard we can overcome the economic crisis too,” Democratic Party floor leader Rep. Lee In-young said after the exit poll results are announced, saying that the government has proven itself in dealing with the outbreak in Korea.

“I assess it as there being a desire to allow (the ruling party) to lead and stably run state affairs in these extraordinary times.”

As of 10:50 p.m., with 49.7 percent of votes counted, the Democratic Party was leading in 150 constituencies, and the United Future Party in 95. Candidates with no party affiliation were leading in five districts, and data from three districts were being updated.

By region, the ruling party appeared to be dominating Seoul with its candidates leading in 38 of the city’s 49 constituencies. The situation was similar in Gyeonggi Province with 43 of 60 districts being led by Democratic Party candidates.

The Democratic Party was also set to take nearly all seats in the Jeolla provinces and Gwangju, which had previously chosen the defunct People’s Party over the ruling party.

The Citizen Party, the ruling party’s satellite party, was expected to take 17 proportional seats, giving the ruling bloc at least half of the 300-seat parliament.

The main opposition was leading only in traditionally conservative areas – Busan, Daegu, Ulsan and North and South Gyeongsang provinces. Combined with the 19 proportional representative seats projected by exit polls for its satellite party Future Korea Party, the conservative opposition was expected to gain 114 seats. The two parties currently hold 112 seats.

While the new proportional representation system was introduced to give smaller parties a chance to expand their parliamentary presence, none of the new parties fared well.

The left-wing opposition Justice Party was headed for five -- all proportional representative -- while the People’s Party was projected for three seats. The People’s Party is a new party founded by former presidential candidate Ahn Cheol-soo.

In the race for Seoul’s Jongno that pitted former prime ministers and potential presidential hopefuls Lee Nak-yeon and Hwang Kyo-ahn against each other, Democratic Party’s Lee was projected to win with a significant margin. Hwang is also the current chairman of the United Future Party.

As of 10 p.m., Lee’s victory appeared certain, with 58.2 percent of counted ballots. At the time, 65.7 percent of the ballots for the district had been counted.

In the exit polls, Lee received 53 percent and Hwang 44.8 percent of the votes.

In terms of voter turnout, Wednesday’s elections were headed for a new high in 28 years.

By region, Ulsan showed the highest turnout with 68.6 percent followed by Seoul with 68 percent. At the other end of the scale, South Chungcheong Province’s figure came in at the lowest with 62.4 percent, followed by Jeju with 62.9 percent.

The final results were expected in the early hours of Thursday.

The overall results of the election were projected to begin to take shape from 2 a.m. for constituency seats, and from around 8 a.m. for proportional representative votes.

Due to the introduction of proportional representation parties in this year’s elections, the ballot for parties measures over 48 centimeters, making it impossible to be counted by machine.

In addition to the proportional representative parties, Wednesday’s elections were also the first to include 18-year-olds, who account for about 1.2 percent of all voters, cast their ballots.

Those in self-isolation due to the COVID-19 pandemic were also allowed to vote, provided that they showed no symptoms related to the disease.

According to the National Election Commission, 22.8 percent or 13,642 of 59,918 people in self-isolation applied to vote.

The self-isolated individuals were allowed to leave the place of isolation between 5:20 p.m. and 7 p.m. The temporary lifting of self-isolation was granted only for those located within 30 minutes -- by car or foot -- of polling stations.